Out of the laurel forest 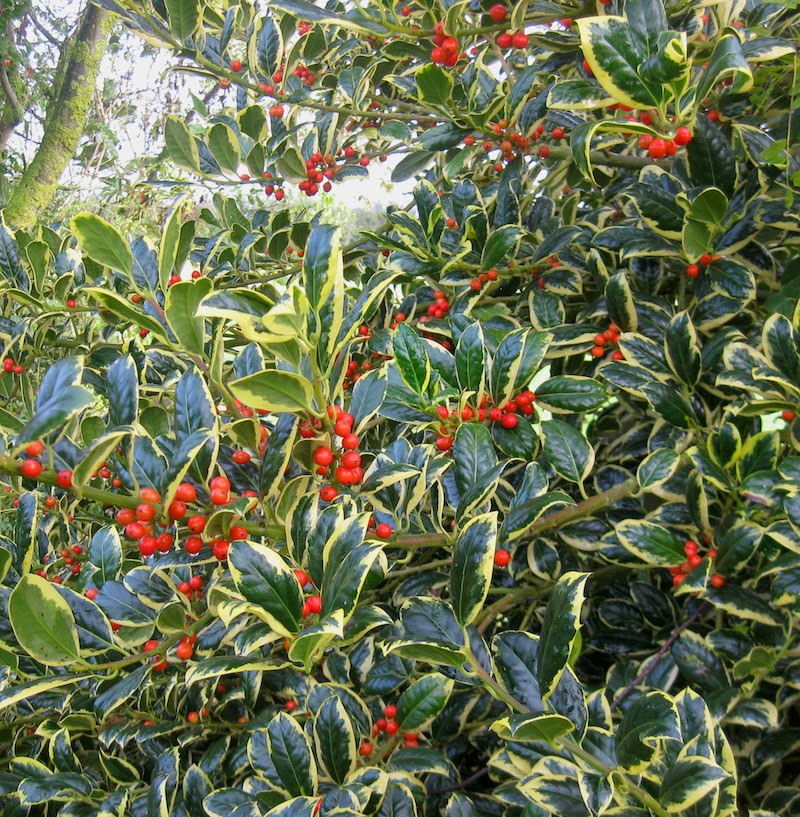 Last Christmas I wrote about our native mistletoe and observed that mistletoes were represented in many different families worldwide. By contrast there are 500 hollies which are all classified in an ancient genus called Ilex which is the sole member of the family Aquifoliaceae.

On a worldwide evolutionary time scale the genus Ilex is thought to have evolved and survived in wet zones called laurel forest. Such areas are typified by semi tropical cloud forest and characterised by regular rainfall, heavy mists and dews. Many different genera of evergreen plants have evolved in such conditions and their leaves very efficiently shed water. Parallel evolutionary strategies have led to hard, waxy, glossy, slightly elongated, sometimes hanging leaves. Holly is a prime example of leaves with a pointed drip tip that directs water to the ground.
I had no sooner penned the above and Peter came around. In my first draft I had stated that constantly wet leaves have trouble with transpiration, Wiki had just told me!
He quickly debunked this notion and went on to explain that thick shiny leaves are much more significant for survival in dry dehydrating winds and added that holly was frequently found in cold windy exposed situations. My final protestation was to ask about the drip tip? He suggested that rather than remove excessive water it was perhaps more important to conserve water from misty-wet leaves by directing it to the roots!

The European Holly Ilex aquifolium is one of our few genuinely native evergreen hardwood  trees. It has a long history entwined in ancient pagan traditions and land usage.
It was used as animal fodder and is highly nutritious. It was extensively planted for hedging and an old country saying is that the best place for lambing is under its cover. The siting of  200 year old hollies even now is taken as evidence of old boundaries.

ees ane olde hoa’se......
He salle be putt into the parke holyne for to gnawe
old English  C14 saying

You may protest that hollies are rather prickly for eating! Holly when browsed is spinescent. That is prickly new growth is promoted when leaves are eaten. Holly, free of poisonous berries, were cropped high on the bush where the leaves are smooth.
There is some evidence that shoots several weeks old are preferred by farm animals. Indeed, deer and New Forest ponies have been observed to gnaw away small branches, let them fall to the ground and some weeks later to return to eat them.

When I pruned Cathi’s holly and fed branches to her Soay sheep they came running and had a quick nibble before turning away as they do when they sample any new food. Now a month later those branches have been gnawed almost completely away. Yesterday I gave them some more of the original prunings and they eagerly started to eat them. Were they now confident that the the food was safe?  And do animals  find ‘weathered’ shoots taste better, perhaps sensing that natural toxins have broken down?

Holly once was even planted as coppice as an ongoing crop.  Many English country place-names with derivations of ‘hollins’ record an ancient farming history.

Holly as a garden plant

I must tell you I am addicted to variegated plants and none of my seven hollies are green. I grow them as specimen shrubs in a more or less natural shape. I am generally quite scathing of folk who topiarise their shrubs by clipping them tightly! I came very close to this myself on one of my hollies recently when I got a little carried away with my petrol hedge trimmer. Actually it looks rather nice loosely clipped!

Hollies make the best hedges off all, as witnessed in old farm fields. Evergreen, variegated, (if you like that sort of thing), wind proof, hardy, long lived, impenetrable, tolerant of full sun or very deep shade, easy to grow - what more do you need?
Unfortunately small plants are very vulnerable to rabbits who just love it. I found this to my cost when I planted my new garden and with surgical precision they cut my new plants to the ground. Brenda contrived little bamboo cages around their replacements! Now that my hollies are large and unprotected they suffer no damage at all.
Holly’s main disadvantage as a hedge is that it is slow to establish. Variegated ones are painfully slow! This is the downside of their tolerance of deep shade. My advice is that if you are planting a holly hedge, to plant large container grown plants, economising a little by planting them perhaps at a fairly wide 45cm apart.

Most hollies have single sexed flowers. To get berries you need separate male and a female plants - unless you choose a hermaphrodite cultivar such as Ilex ‘Van Tol'. With seven hollies in my garden I have no problems with cross pollination although a male plant such as Ilex ‘Silver Queen’ is unable to berry! No, this is not a misprint, ‘Silver Queen’ is a male - and ‘Golden King’ is a female! Such confusion is common! What a shame breeders and botanists fail to talk!

Green hollies sow themselves freely and do so in shady places in my Worsbrough cemetery garden where their hard shiny leaves efficiently shed my glyphosate spray. If you are one of my very rare visitors please help yourself!


I had a holly tree in Bolton Percy which like the picture below had shoots close to the ground. I had contrived next to it a bed of raised soil. (These things happen). The wind blown branches abraded by the soil within eighteen months had rooted. A novel form of layering which illustrates their ease of rooting.

Inspired by reading how easy they are to root I tried this November inserting some holly cuttings direct in the ground. Observe how I have wounded them by deliberately slicing. As is my wont, other than any leaves sliced away, all the leaves are intact. I have no idea how well the cuttings will root! Some of you will remember how I inserted many diverse hardwood cuttings two years ago and six months later reported their progress. I will again report my future success or failure!

Hedges are clipped and shrubs too can be lightly pruned with a hedge trimmer. Better for specimen shrubs and small trees to tastefully prune in a natural way using secateurs and loppers. Or as in the earlier picture a saw!