Armillaria, honey fungus or bootlace fungus - they all mean the same, but very importantly come in different kinds

My previous post about this much feared disease suggested that finding it in your garden is not the disaster it is cracked up to be.
When I received an email from the RHS announcing their fungus hunt I took the opportunity to wing back a link to my my rather complacent post.
The very next day I received a long reply from RHS researcher Jassy Drakulic. The kind of things that I was saying were exactly what she would like to know. The RHS are fully aware about all the damage that the bootlace fungus can do. Members send them their problems! Members don’t usually bother to tell them when no harm has been done. They are now inviting the general public to report their experiences.

The RHS would like to know
Have you honey fungus in your garden?
If so what damage has it done and to what?
Equally important what plants remain healthy?
Have you found bootlaces and yet no or little damage at all?
Do you have pictures of armillaria mushrooms - they need to identify which kind you have got.
Have you historic experience of honey fungus in your garden or elsewhere?
Do you have strange mushrooms growing on living or dead trees or in the ground that you suspect to be honey fungus?

Tell the RHS your story. The link at the bottom will take you to the details of their internet hunt. They ask for quite some detail but don’t be put off and if you provide very little information it is better than none. I wasted ten minutes trying to find the link to find the right form! Silly me - just press the link  ‘complete survey’ under the picture of the mushrooms!
Although Jassy might contact you about further details please don’t expect any identification service. You need to be a RHS member and go down a different route for actual advice!

Why don’t RHS get a complete picture?
Apart for the obvious that people only send in their problems there might be several reasons

1. Gardeners fail to recognise a plant death is due to honey fungus
2. Certain plant deaths get noticed! A dead tree or a hole in a hedge is pretty obvious and might lead to disproportionate  reporting.
3. The obverse of point 2 is gardeners do not expect bulbs or herbaceous plants to be killed - but they can be.
4. Some plants are disproportionately reported when the real cause of death is susceptibility to such as drought, poor drainage or winter cold  and the bootlaces join the party later

Don’t panic
My opinion is still that honey fungus is excessively feared as the kiss of death to a garden and that gardeners go to exorbitant lengths when evidence of bootlaces are found.
Jassy took me to task with some of the details in my previous post and I reproduce part of her e-mail to me here.

Thank you for your e-mail! I’m trying to gather as much information about how Honey Fungus affects gardeners as I can and case studies like those you’ve described are really valuable to me to get a better perspective of the reality of the disease impact and how people interpret the science based on what information is out there.

From the look of those mushrooms they are sulfur tuft (Hypholoma fasciculare) not HF as the spores are dark not pale and there is no annulus. The bootlaces are HF however, and given the abundance of them along with how few plant deaths your garden has had, it is likely to be colonised by Armillaria gallica. This HF species is not a true pathogen at all but only an opportunist that can kill once its host plant is weakened in some other way (pests, mechanical damage, drought - rather than waterlogging).

The point that is made in the blog post is the very reason for this year’s Honey Fungus Hunt! Our last survey (2004-7) was based on samples received at the RHS, which itself limited the dataset to only times when host plants had died, so understandably we got lots of incidences of the most pathogenic species in gardens – A. mellea. By asking the public to record any mushrooms they see, which plants they’re found with and how healthy those plants are I can get a better picture of how often HF occurs without causing plant death as well as gathering any historical information about HF in their gardens that they wish to share. (https://www.rhs.org.uk/honey-fungus-hunt).
The survey will also help gardeners ID HF for themselves better – with such resources available the person ID’ing your mushrooms would have been able to tell that it wasn’t right because of the spore colour, for instance (https://www.rhs.org.uk/advice/profile?PID=1017).

The two links in the email are very useful


I suggested in my previous post that it is something of a lottery whether your honey fungus is a curse or a damp squib. I noted that if you hit the jackpot and had a susceptible plant that is old and growing in predisposing conditions you might be in trouble. I today add a fourth variable to consider - whether you have a benign or aggressive species or strain of the fungus.
Jassy in her e-mail made the fascinating point that a less aggressive species such as Armillaria gallica might be antagonistic to the more serious effects of the feared Armillaria mellea.

Some more examples of my own confusion

1. My Spartium junceum, Spanish broom, was checked and lost its youthful vigour after record cold Winter 2010. It's never been the same. It lost its main frame trunk but a strong shoot from the ground took over and made a 'passable plant'. It is in the area that I previously reported honey fungus and for this post I recently scrabbled around.

2. When walking through a near village I spotted thirty or so fungal fructifications emerging from a manicured lawn under a dozen or so healthy mature specimen birches. My own identification skills are such as that I would not be sure of a common mushroom. I did not have opportunity to examine more closely. Most such fungi are completely harmless. Do not fear to submit to the survey if you are not sure. 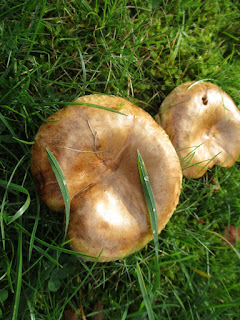 3. In my previous honey fungus post I pictured a somewhat distressed lilac growing in my 'infected 'zone'. It ticked the right boxes. When we moved in fifteen years ago we had pruned it down from an overgrown thicket which had had several trunks.We had also chopped down half dozen old Leylands and being me I had left stumps in the ground! The site is very dry in Summer. As I say all the right boxes, hard pruning, potential source of infection, summer drought, old plant and a susceptible species (nineteenth on the previous RHS survey).
Worse I have allowed my ivy to grow over it - always a symptom (and cause) of a weak growing plant. For ten years now Brenda has told me its on the way out and I should remove it. Every year it flowers magnificently.


Links
I was very cavalier about leaving tree stumps in the ground in this old post. The only amendment I would make to my advice is that I failed to emphasise to cut your tree trunk close to the ground. This is not relevant to honey fungus - or is it with a greater dying food source? - it is forgetting it is there and tripping over!