A passion for rhododendrons.


Guest Post
I am reprinting today a very interesting article written by my friend Peter Williams for the East Yorkshire group of the Hardy Plant Society. I recently wrote about Peter and his beautiful garden In my piece ‘One of Yorkshire’s Finest Gardens’. I hope you enjoy reading Peter’s thoughtful article about a plant about which he has in depth knowledge, loves and grows to perfection. Thank you Pete for this lovely piece and your beautiful photographs.

Rhododendrons – Unloved and dangerous, the tale of one enthusiast
I was probably about seven or eight years old when I first became aware of Rhododendrons. It was the Easter holiday and I was with a group of friends in South Wales and we were on one of our regular skirmishes with nature that usually involved building dens, climbing trees and damming small streams.  On this particular day we wandered outside our usual hunter and gather range and came across a small wood packed with Rhododendron ponticum in full flower and I was hooked for life.  I thought that they were the most amazing plants I had ever seen and I just had to take a bunch of the huge flowers home for my mum.  I was expecting a hero’s welcome for returning with such a prize but this was not to be.  Instead, my mum became very flustered and said it was unlucky to bring flowering shrubs into the house and she would only allow them in the windowless garden shed. I could not understand this at all because unlike nowadays, we were encouraged to pick wild flowers and take them home. Only much later did I discover that the wood belonged to a member of the local gentry who owned most of the houses in our village, ours included, and who collected the rent weekly in person. I guess that my mum felt that he might not appreciate seeing a large bunch of his prize Rhododendrons on our living room table.
When I married and we bought our first home, Rhododendrons and Azaleas were right at the top of the list of plants that we wanted for our small garden.  Despite the fact that the soil was not acid, added peat and sequestrene did the trick and they grew reasonably well. 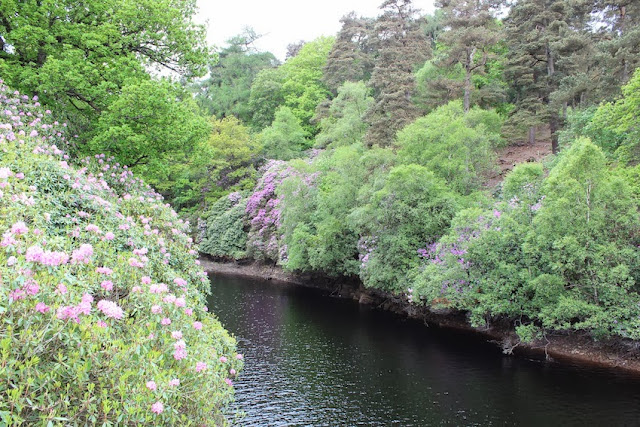