Why gardeners dig; to bury wood 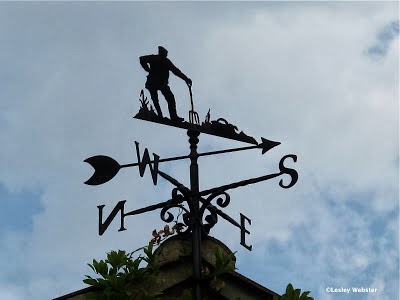 I have lost count of the reasons I have found for digging in this series. Indeed my recent post about digging hydrophobic soil was not even under this heading. You may consider some of the reasons I disturb the soil are quite eccentric. I have separately discussed burial of newspaper, placement and mixing of drainage sands and gravels and the forking-in of my homemade biochar. Some of you may think for a none dig gardener I disturb my soil quite a lot. In fact if you exclude very shallow hoeing, I disturb by planting and other management functions no more than 10% of my soil each year and that includes substantial help from the rabbits and moles! In fact one of the advantages of generally being a minimum cultivator is that I have no worries about what I might subsequently dig up. This is very relevant to burying newspapers, woody prunings and logs!

The first evidence I offer to the pedigree of burying wood is from my hero Masanobu Fukuoka the Japanese grower-philosopher who is often credited to be the father  of no dig gardening. On his hilly orchards he buried his grubbed-out unwanted trees and buried them to create drainage holes in his rocky subsoil and  provide reserves of organic matter and nutrients. He also used wood to create ‘rubble drains’ of buried wood to channel water enriched with nutrients released by decay. His fruit trees benefited hugely from this buried organic resource

When woody prunings eventually decay they make a longer lasting contribution to  soil organic matter than normal material from a compost heap. Indeed many composters now shred their prunings and add them to the heap or the bin. Professional ‘composting facilities’ make huge returns from receiving waste timber and tree prunings  to make their somewhat dubious product. I have even accepted a free lorry load from a local exponent!
Many landscapers shred their prunings and it makes a very excellent mulch. I remember when our college garden curator used shredded bark to add a lumpy component to sandy soil. Indeed bark makes an excellent potting compost ingredient especially for orchids. Wood has a great deal to offer the soil.

My own experiences of burying prunings

I will gloss over that I have been known to add hedge clippings to my holes of buried newspaper! Four years ago on my visit to my son Ben and his lovely wife Kathryn I was given the task of planting a small new border. Fathers have their uses and I cannot compete with Kath’s dad for his work on the house! My preferred method of planting a very weedy plot of land is to spray off with glyphosate and a few months later plant.
This was not possible here and I have explained before that one advantage of digging is that you can transform a plot in just a few hours. Fortunately, although weedy there was no perennial weed. The structure of the clay soil however was appalling. In a London small garden it is not practical to have a fire and behind Ben’s shed was a heap of several years prunings left by the previous owner. It was appropriate to raise the height of the new border. I had not dug for years but took out a wide digging trench and filled it with prunings and then skimmed weed onto the top. I continued turning the soil over to regain my trench and cover the debris with a spit’s depth of soil. I seem to remember I planted herbaceous perennials that I had brought from home as I proceeded. There was no prospect of the buried prunings interfering with later cultivation. Not so much a none digger, Ben goes further and is a none gardener!
The point of my story is that three years later there was a change of plan (don’t ask), and the border would have to be planted again. The soil had been transformed, the prunings had virtually gone and the soil was black and crumbly!

Ten years ago when I was still developing my new garden at Seaton Ross, a small existing raised border was adjacent to a hollow. I wanted to level and considerably raise the whole site. I had lots of woody prunings and some were quite thick, even small tree trunks. At the time I still had clients and frequently brought home bagged prunings to dispose of. It was before I used the farm field for my bonfires and before I got the terra preta bug of making biochar!  I hate wasting any organic matter and indeed I take a rather pathetic pride in not doing so! I buried the lot to create a new herbaceous planting alongside the entrance to my drive. It has been very successful on a previously dry and degraded soil. The only interesting thing to report- other than that my herbaceous plants grow exceedingly well - was that a buried magnolia trunk sprouted from a foot down and made a new plant!

I have only recently read about hugelkultur. It is a well established ‘organic’ system well described on this Permaculture site. I am amazed and impressed by how far this system has been developed to grow ornamental plants, fruits and vegetables over buried wood in level or raised beds. Indeed the raised beds might be two metres high! There are no absolute rules to hugelkultur. It’s just the principle of growing plants in a fairly thin layer of soil that overlies wood. I was amazed to see the layer of soil might be as little as two inches! Better, I would suggest, a little more.
Wouldn’t it be lovely if all those ugly raised beds used by vegetable growers were buried trees overlaid by soil.

The buried wood might be anything from small prunings to huge tree trunks and logs. The deeper the layer of wood the better. Almost all untreated wood is suitable although willow, apple and poplar are particularly recommended. The wood is a huge resource of heat (the same principle as a traditional hotbed) and a supply of nutrients as it decays. After a year or two it is able to retain more available water than soil. If after many years it has totally decayed the soil remains in a beautiful black condition.
In the first year or two there may some small nitrogen depletion as fungi and bacteria grab this nutrient which is used in the early stages of decay. In practice this is inconsequential or can be adjusted by adding a little high nitrogen fertiliser. If you are a true believer the fertilizer will be urine!

A little flight of fancy 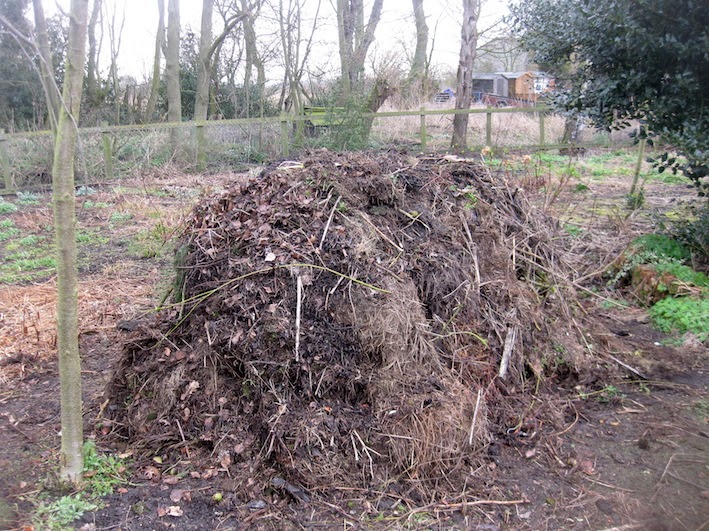 OK, I have lost the plot  - on the plot - and have just given way to pending senility. I have always played in my garden and here I go again. It was too good an opportunity to miss. Waiting for a bonfire on the village plot were two elder trees killed in last year’s flooding, Peggy’s hedge clippings and a large pile of decayed grass - a kind gentleman had cut the long grass under the fruit trees. Against my own better judgement there was even a supply of compostable material gathered up by someone much tidier than me. (I normally leave the dead forget-me-nots on the soil surface). Around the plot were some huge logs that I could scarcely move. I spent three happy hours building a heap. I will fling some hardy annual seed over it in a few weeks time. With many small prunings at the top it will sink a lot, and I am planning to plant it with select hardy perennials next year.

Brenda has not yet noticed that a funny shaped pile seems to have appeared at the bottom of our own garden!