Being Cathi’s head gardener it is quite a responsibility and I now find I have fallen down on the job!

My normal attitude to pest and disease in the ornamental garden is not to see pathogens and expect natural predators and parasites to keep them under control. Where possible I choose resistant varieties and grow my plants well and in doing so, do not predispose them to sickness. It does not always work out that way!

I noticed this disgusting mess on Cathi’s lovely pendulous crab apple. It must have taken woolly aphid several years to create this state of affairs. Cathi get a new gardener! She had not noticed either! None gardeners don’t see these things until it’s too late.

If not brought under control, woolly aphid brings death and destruction. It usually starts with mild stress on a susceptible variety. I remember a client whose apple tree had light infections on straggly weak shoots at the base of the trunk. The tree probably suffered from drought and the base was heavily shaded. I would annually prune the woolly aphid away and the trees continued to thrive.

From such little beginnings, if no action is taken, over the years the infection spreads to eventually take over the tree. Each year any initial stress is magnified as the aphid sucks life from the plant. Infection accelerates and the tree becomes a write off and eventually dead! It is very difficult to spray a large tree and I know no suitable pesticides available to amateurs that will penetrate the woolly protection and control the affliction. Systemic insecticides do not work well in woody plants so no help there either.

My initial reaction was that we would lose Cathi’s tree. On closer inspection it appeared that infection was still mainly at the base of the trunk and any woolly aphid aphid higher up in the tree was at the tips of the branches. The next day I returned with my secateurs, loppers and saw. I also brought a scrubber and a secret chemical weapon!

If you carelessly brush past the trunk you cover yourself with a sticky pink goo!
Woolly aphid stimulates the production of swellings and galls. My first job was to severely prune away a few lower branches, twigs and galls 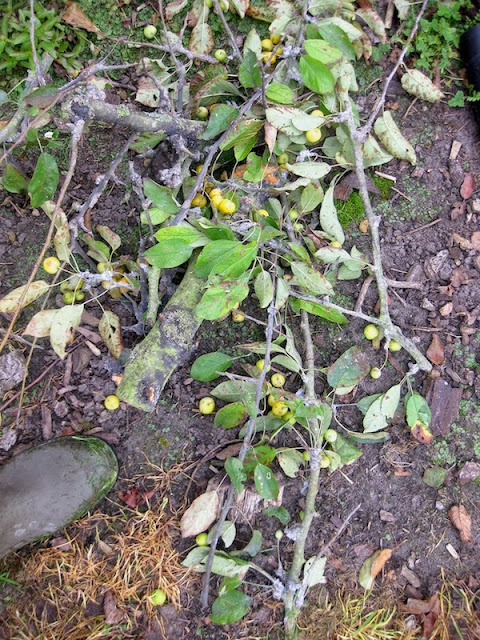 I wonder if I did not clear away this debris whether the aphid would produce a winged generation to fly back and reinvade the tree. I did not take chances and removed them after Cathi's hens had had a feast 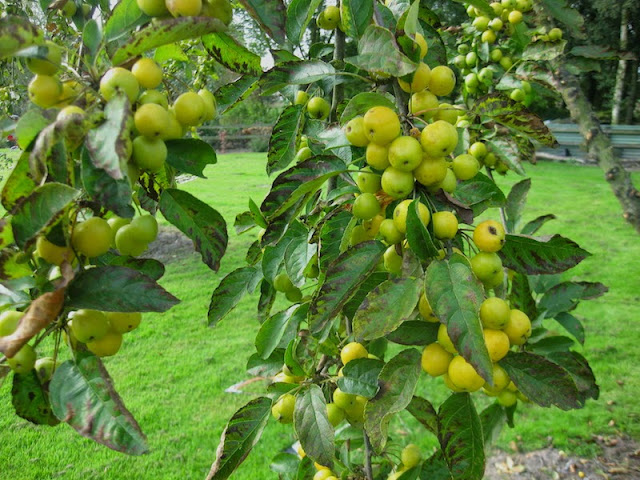 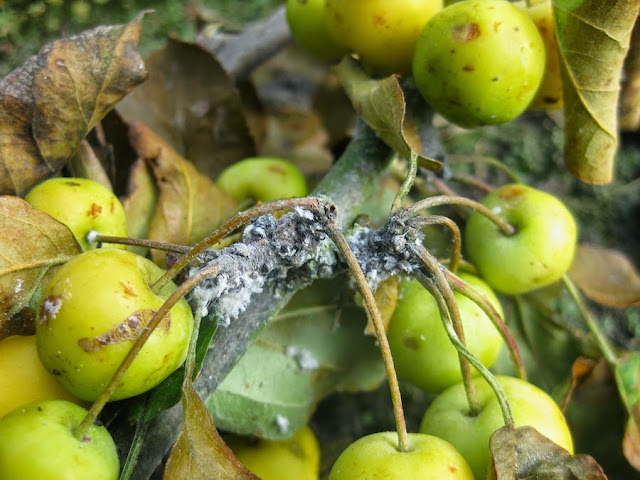 The scale-like nymphs can crawl to fruits and leaves. On Cathi's tree most of this infection was near the tips of the branches and twigs and was easily pruned away. In some cases on densely leaved  lower branches I just gave them a squirt of Ecover and/or pruned them away 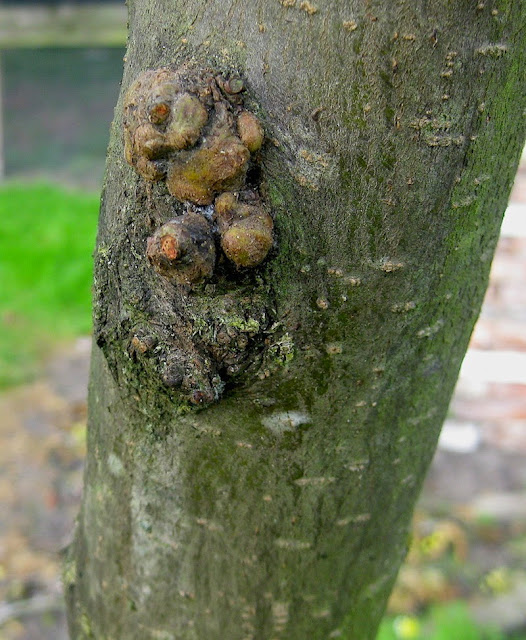 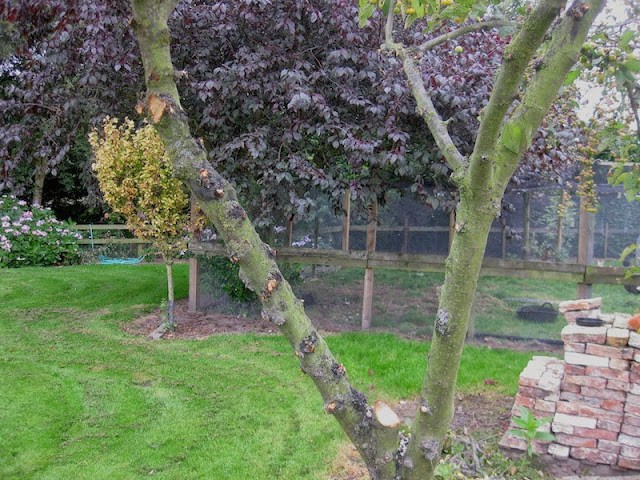 After scrubbing the abnormal galls stimulated by the aphid  can be clearly seen. I hesitated about cutting them away and compromised by just taking out the big ones 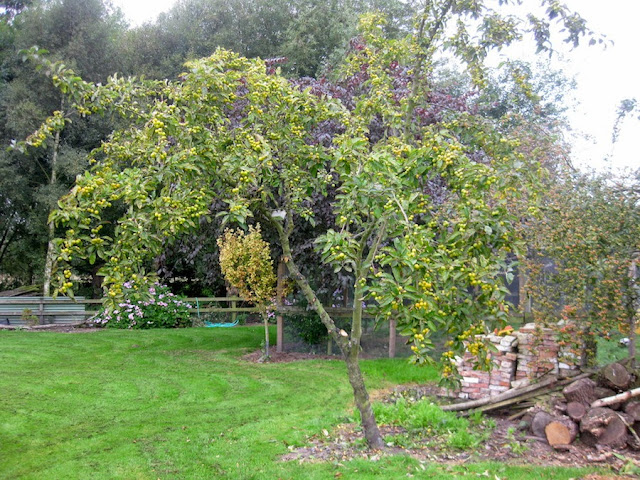 Now a nicer looking tree. The adjacent red weeping apple is completely uninfected and is evidently resistant.
Pruning cuts will NOT be painted. I blanch at the thought. 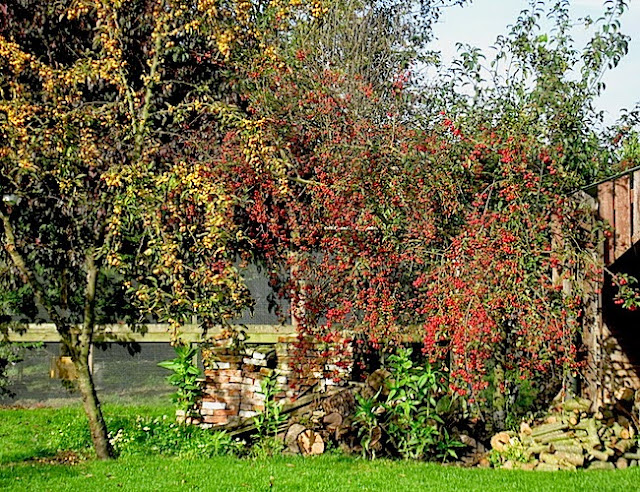 Five weeks later in October the crab apples are colouring up nicely and will last beyond Christmas.

A half-hearted disclaimer
I do not consider the serendipity factor of my use of Ecover on a whim as essential to the successful control of woolly aphid! My thought was that it’s wetting power might aid penetration of the soap. I admit I got carried away merely squirting with alcohol rich ecover on a few of the higher infected branches. I made little attempt a few days later to find the aphids I sprayed. Although no aphid is apparent now, for all I know there may be some very hilarious aphids hicoughing away in happy hibernation. At least when I had finished my hands have never been cleaner! Perhaps there is scope for a project next year.

Update June 1st 2015
Its back!
Cathi noticed her cat had some white fur. It had scratched itself on the tree. Gardeners often give up at this stage. That’s fatal. The infection is now much reduced but the trunk is going to need a few more scrubbings!
Woolly aphid hibernates at the base of the trunk and on woody roots in the ground. Young crawler nymphs re-emerge to re-infect the trunk. Later - if allowed to remain  - winged generations infect higher parts of the tree. Action is required now.

I repeated the scrubbing with soapy water carried to Cathi’s in the kitchen bowl. With the convenient long firm light kitchen pan brush it took no more than a quarter of an hour. Cathi now has a lovely sweet smelling tree. I wonder how soon before I have to pop over again.

The overall tree looks extremely healthy. The very close adjacent crab apple tree that has shown itself to be resistant to woolly aphid is still completely clear as is an eating apple ten yards away. 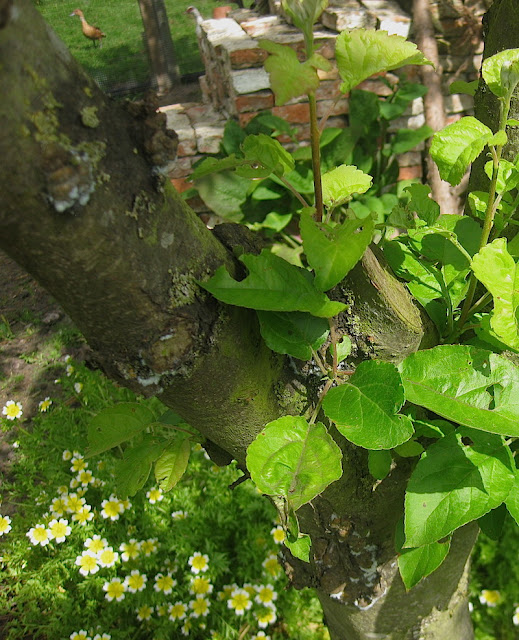 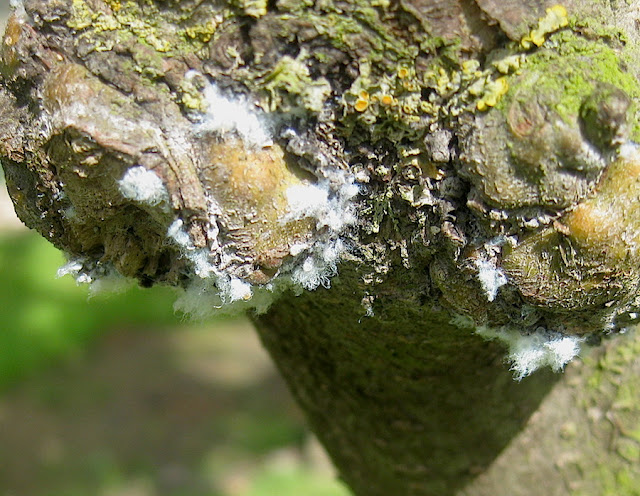 The aphids have returned at the edge of the galls 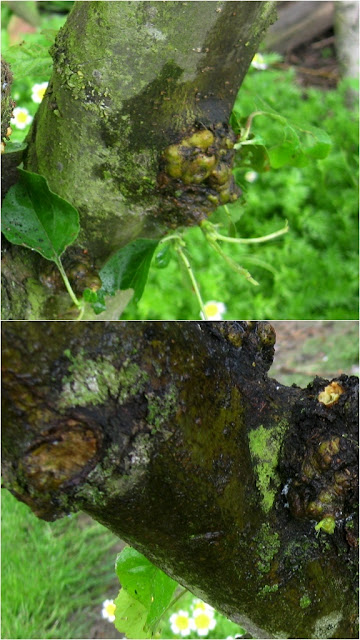 After a vigorous scrub

Further update mid October 2015
Victory proclaimed
It’s gone! I inspected very carefully and no woolly aphid could be seen. Not even in the top where at least some aphids must have escaped my attention. I expect where few pests were present natural control took over on the smaller upper branches.
As you can see the trunk is completely free but the previously raised woody galls remain but are no longer infected.

Woolly aphid has been completely banished from Cathi’s garden
further update November 2016 I examined Cathi's tree for the first time this year. There is still no sign of woolly aphid returning
July 2018.This post has been rousing some interest - perhaps woolly aphid is bad this year? I rushed round to Cathi's tree to find it in lusty health.
Another bad pest seems to be enjoying this Summer, box caterpillar

And a note about Ipomoea

I recently wrote about the control of bindweed I jested about killing bindweed in Folkestone and going home to my Morning Glory!