MCPA and other chemicals used in grass.

I take a break from glyphosate today but find it even more necessary than usual to advice inexperienced gardeners to be extremely cautious and to read my previous posts about spraying. You can find my posts by inserting ‘glyphosate’ in the search box at the end of the blog scroll.

MCPA has been safely used on amateur gardeners' lawns for more than fifty years. It is an ingredient in many of the popular three-in-one mixtures of lawn fertiliser, moss killer and weed killer. It is also used in amateur and professional lawn weed killer sprays mixed with equally traditional choices such as 24-D and mecoprop (clover killer). Modern alternatives such as triclopyr are also available.

Unfortunately I am unable to source an amateur spray that is MCPA only! Inconvenient for my suggestions today. However at the press of a button on your computer you can find a professional formulation marketed as Agritox.
Other than glyphosate I am generally reluctant to recommend professional chemicals to the public. Many are too dangerous and they are invariably much more concentrated than amateur versions.The liquid concentrate of MCPA is an eye irritant.
Depending on your domicile the use of professional products might even be illegal. In the UK, chemical producers and garden centres maintain that perception. I write for trained professionals as well as home gardeners and try to cater for the needs of managing large areas. If you do use commercial products please remember that their strength when diluted and applied to the plants is exactly the same as when they are from amateur sources.

Another reservation about lawn weed killers such as MCPA is that they have a bad name because they have frequently been used irresponsibly by farmers, government and local authorities and various organisations to kill wild flowers when regarding them as weeds. Things are better now, the last time I walked round Kew, the daisies and other wild flowers in the grassland areas were an important part of the landscape.
I argue that the resources of gardeners, landowners and farmers can be used for good or bad. Even innocuous practices such as ploughing or drainage when ill-used can destroy natural environments. No one would argue that, for example planting trees was not a good thing. But, if you were to plant Leyland cypresses in the wrong place, or to plant trees in rich water meadows that were filled with wild flowers, or place mono-cultures of holly in suburban places or trees obscuring beautiful views it might not be wise.

If you go to the RHS website you will find products available to amateurs for use in grass.The only 'straight' spray I could  find (rather than ‘cocktails’ ) was triclopyr which against woody weeds such as young saplings or even 'difficult' ivy is better than MCPA. I would go so far as to suggest that against woody weeds triclopyr is the best weedkiller of all. The RHS state that triclopyr is only suitable in coarse grass and not on fine lawns. This may be true but when I have used it myself at low concentrations on my fescue lawn, coarse grass is slightly and very temporarily browned and my fine fescue is competely untouched. Unfortunately many gardeners have more coarse grasses in their lawns than fine ones!

Well mainly it does not kill grass - when suitably diluted!

Like glyphosate (which most definitely does kill grass) it is translocated and when absorbed by the foliage, moves to the roots and kills the whole plant. Although MCPA is degraded by soil bacteria, unlike speedier glyphosate it takes several days. This is an advantage in lawns because it continues to kill broad leaved weeds but is rather less of an advantage when mowings contaminate the compost heap.
And of course unlike glyphosate, it would be fatal to sow seed or plant delicate young plants for a few weeks after MCPA's use.

If you spray grassland after using glyphosate it is very important to wash out your sprayer! Spray the tank and its diaphragm completely empty and spray through with clear water. If not you will have several square metres of dead grass!

Against woody weeds such as brambles, MCPA (or even better triclopyr) are superior to glyphosate. Even herbaceous weeds such as nettles, docks and dandelions are arguably more efficiently killed by MCPA than by glyphosate and certainly more quickly!
If it rains heavily after these grassland weed killers are used, unlike glyphosate, they will still be effective.

Of course only an idiot would spray MCPA and similar grassland herbicides amongst ornamental plants. That idiot is sometimes me!

It is not my intention today to discuss weed control on lawns. There is plenty of that in the popular press, most of it sound, although I could never understand why they  sometimes tell you that September and October is too late to apply lawn herbicides. I spray even in November! It is October when I seem to have my greatest need!

Twenty years ago when I took on the weed and plant management of the old three acre cemetery, two acres were under five foot high brambles.
I did not originally intend to take on such a large area, but I had three months of unexpected help from the ‘boys’ from the probation service and the brambles were all strimmed to the ground. I would rather start by spraying intact plants but entry into the thicket would have been a shear impossibility.
The point of the story is that the regenerating brambles were sprayed alternately with glyphosate and MCPA. Please don’t ask me whether one is permitted to mix them together!
It took almost two seasons to completely eliminate the brambles before I could attempt to establish my flowers.

In a similar case when I took on Seaton Ross village plot which was almost a monoculture of three foot high ground elder I used the same combination.

Brenda’s son lives in a shabby-chic manoir in France. Like many unwanted French properties it has many acres of grounds. Peter’s two horses graze several fields which when they moved in were overgrown with brambles, nettles and in one field numerous ash saplings. My regular ‘holidays’ would start every morning by emptying a large knapsack sprayer charged with 24-D or Grazon 90.
24-D is more readily available than MCPA in France and is an equal equivalent. Grazon - get the accurate pun in the name - is a superb grassland cocktail that contains triclopyr. and will take out very ‘difficult’ weeds.
I made considerable inroads in the first two years of our holiday time visits. These were as nothing when Peter acquired a tractor mounted powerful mower that after a year had completely shifted all the ‘woody weeds’. Leaving  a few nettles for me!

Cathi has rare breed hens, rheas and soay sheep on her smallholding. Harry used to spot-spray nettles, sedges, brambles and creeping thistle on the three acres. (The sedges needed glyphosate which of course also kills surrounding grass if you are not very accurate). I have taken on the mantle and once a year break off from the fields to use the same dilution of MCPA to spray the buttercups and plantains in her acre lawn. My usual dilution of MCPA is one in 70 concentrate/water ratio of Agritox (elsewhere against epilobium one in 50). MCPA does not kill Cathi’s wanted nitrogen fixing clover!
No nettles or brambles now survive around her outbuildings and sheds but that most wretched of weeds epilobium keeps seeding back and is duly zapped.

Case 4. On a country estate
At one time my ‘practical’ consultancy took me to work in a place renowned for its wild flowers. Unfortunately even in such places hogweed, nettles, brambles and other coarse plants infiltrated the beauty. Such ‘nasties’ (the owner’s description) were taken out by spot spraying with MCPA.
Peter’s beautiful bluebells reprinted from my previous post might just might have had similar ‘help’. 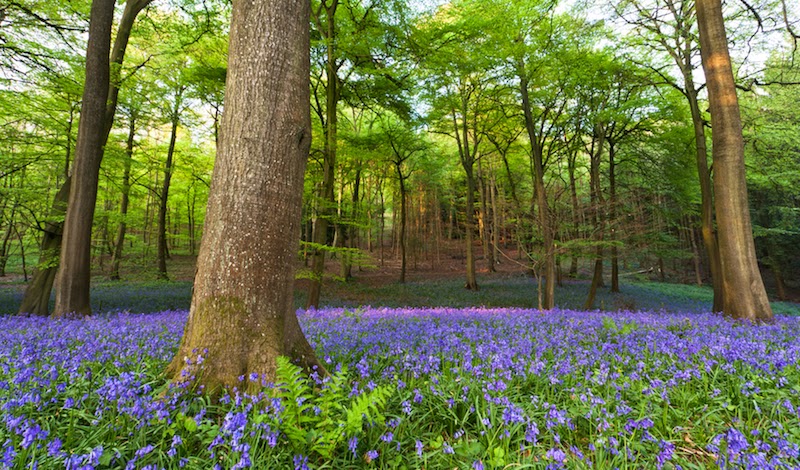 Case 5 Maintenance of Worsbrough cemetery 2014
At over three acres it really is too big for me! I only have opportunity and energy for one four hour visit per month. This labour input is way below any normal amount for large areas of thousands of flowers! Never-the-less some people think it takes care of itself!
I only get completely round with my sprayer every two months - and in the more wooded and unvisited parts even less. It is not enough!

I have by now got rid of all established perennials weeds save perhaps for that impossible weed called hedge vetch which at least looks rather pretty and does not invade new patches. Most seeding weeds are almost completely eliminated. The exception is that wretch, epilobium, which not only prolifically seeds all over, but when I do get rid of it, it blows in again from outside. Although glyphosate kills it in summer when it is growing - and seeding - it is too late. It is a perennial that dies back to a tight green rosette of leaves for six months or so overwinter. Unlike glyphosate, MCPA does kill it at this phase. Not selectively of course and the spray needs to be directed.
I have developed a technique where my herbaceous perennials and self seeding annuals are in large drifts and clumps. My shrubs are vigorous and large and generally hug the ground. My plants do much of the work of suppressing germinating weeds. 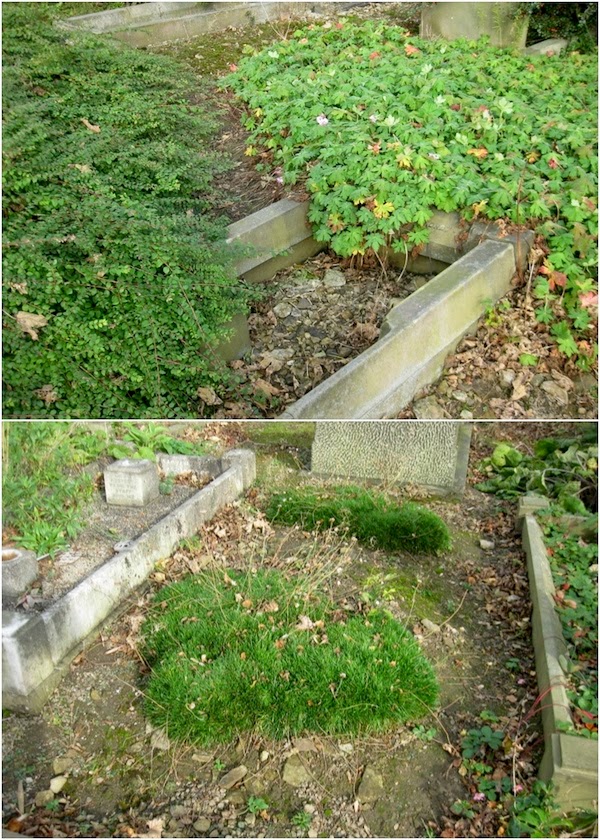 This leaves large spaces which are empty of wanted vegetation. I spray the epilobiums there with MCPA!
It is of course potentially damaging to neighbouring delicate plants and I am highly attuned to what is sensible!

I had intended to tell you more about these methods but got cold feet and decided it unwise to lead you into such sin.
Instead I am providing pictures of my last visit to Worsbrough in mid November when I sprayed MCPA!

As the photos were taken in mid November it’s not very pretty!

This is the culprit

Yesterday I updated my post on Japanese knotweed
Posted by Roger Brook - No Dig Gardener at 10:16