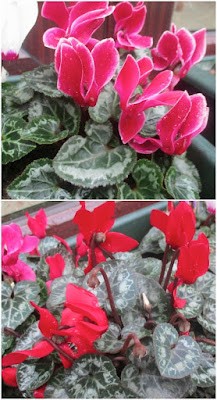 I used to rail against garden centres when they sold the florist cyclamen, Cyclamen persicum to grow outside as Autumn bedding. For several years now I have enthusiastically grown them this way!
In our UK climate if you plant  ‘indoor cyclamen’ outside in early September with luck you will have ten weeks of colour before severe winter cold kills them. If you live in an urban heat island they might last even longer. In balmy South West Scotland I even saw them in Spring! I don’t know if they had been bedded at that time or had remained outside all Winter.
What used to really rile me was when florist cyclamen were displayed amongst the truly hardy Cyclamen hederifolium. If they were not even hardened the greater my ire.

Now garden centres don’t even distinguish between Cyclamen persicum designated for inside or out! Nor do they have to. Other than a possible element of hardening-off there is no need - most varieties behave exactly the same. I am not even aware that modern varieties are any hardier than the old ones. (There would seem to be a market for more hardy ones and it would be surprising if no breeding was being attempted. On the other hand what is the incentive to sell plants that live longer?).

I don’t know why bedding-out of cyclamen has become popular over the last twenty years. Are we experiencing milder Autumns? Are we more ‘short term’  and ‘immediate gratification’ gardeners than we used to be? Are the plants just cheaper?

This year I bought my cyclamen in six packs at Aldi. Six sturdy young plants cost £2.99. I splashed £8.97. What extraordinary value to brighten our Autumn. The way to purchase such plants at superstores is to buy within a very few days of stocking. Our growers are superb but as to keeping plants alive shops are shocking! Go to Aldi on a Saturday morning when new stock has just arrived.

Plant them in tubs or in the ground. Perhaps better in tubs as they can be displayed near a window or an entrance. If there is an element of shelter which gives some frost and wind protection so much the better. Purchased plants  have a small rooting volume so don’t overlook watering them when dry. Although watering is important, persistent heavy rain is a greater threat. Your container must have ample drainage and your compost must be well drained.

It seems to me that outdoor florist cyclamen stand up to minus four degrees centigrade of frost. Prolonged spells are more damaging than short ones. Some gardeners extend their plant’s life by putting tubs under shelter if it is forecast very cold.

How hardy can Cyclamen persicum really be?
I had a plant in the garden in a sheltered corner, under a roof overhang and growing amongst Cyclamen hederifolium that survived the double Winter of 2010! Botanist friend Mike refused to be impressed and observed that it got quite cold in Persia too!

The plant was not very impressive, and remained above ground for only a very short time. Such things only excite crazy gardeners like me!
Did it survive because it was well established? Perhaps it benefited from mycorrhizal association that established cyclamen sometime enjoy? Perhaps the excellent drainage and dryness helped?

Last early Spring I noticed a cyclamen with magnificent foliage markings in the dark passage-way between Cathi’s house and her hedge. It must have been there for at least two years as I knew I had not planted it myself. A single plant of a previously bedded out Cyclamen persicum had survived. I wonder if it will reappear? I doubt it.

In my piece about The National Kabschia Saxifraga Collection at Waterperry in Oxford I photographed a Cyclamen persicum pictured growing under minimal overhead protection.

Straws in the wind. Sensible people don’t try to grow hardy cyclamen permanently outside. Not being sensible I have bought some species Cyclamen persicum seed from Chilterns! I envisage some combination of bedding and overwintering in my cold greenhouse.

Only an enthusiast would grow their own plants from seed when they are so cheap to buy.

How to grow Cyclamen persicum as a house plant
I used to recommend not to even keep indoor cyclamen when they finished flowering and just throw them away. Although it is a long time since I grew them inside, if I did so now I might enjoy the challenge of keeping them for several years. I know gardeners who say they go from strength to strength. For other folk they just fade away!

There are three secrets to growing healthy cyclamen indoors.

Let your plants become very dry, almost wilting and then thoroughly water. Some gardeners let them drink up from their saucer for five minutes, others dunk in the sink. These practices are excellent but unless normal watering just runs away through a dried peat compost you just generously water from the top.
This watering policy is met in an extreme form when watering house plants such as streptocarpus when it is best to let them really wilt before giving them a thorough soaking. Orchids too like to go a long time between waterings before soaking in the sink recharges their water absorptive natural velum root coating.
As cyclamen leaves turn yellow in Spring cease watering almost completely until new growth emerges in Autumn.
As mentioned by this time most folk will have turned them into compost or even wasted their potting compost by throwing it in the green bin.

Last thoughts in late November
It has been a very mild and wet Autumn. Only two days ago we had our first frost. Quite a hard one.

I have been very pleased with the outside Cyclamen persicum which has now given us ten weeks of pleasure and I anticipate a week or two more.
The extreme rainfall has been a feature which for many gardeners might have caused a problem. What a contrast the wet compost has been with the dry regime that I have recommended as desirable inside.
My plants have withstood the rain very well and there has been hardly any fungal disease and no plant death!
I attribute my success to the fact that my plants are in deep containers - about ten inches depth of compost (well in my case sandy soil). I have explained in this post how in wet conditions a deep soil profile has a more favourable ratio of oxygen to water than a shallow one when at maximum water holding capacity after heavy rain.
The other feature of this mild Autumn is that the plants have filled out in their containers more than I expected.

I have recently revised my 2012 post on green manure