Some tips about ‘spot’ glyphosate spraying

Much ado about nozzles

My much loved knapsack sprayer is like an old teddy bear, rather battered and frayed. I have never really understood straps, belts, braces and buckles and my fumbling fingers don't properly tie shoelaces!  Brenda constantly nags me to hitch up my trousers.

After many years the lower strapping on my knapsack was becoming detached from its mounting. Originally my Berthoud sprayer was of the all singing and dancing kind. Now the up-market so called comfort lower strap was anything but and got in the way. After several months of discomfort I had the brilliant idea to cut it away.

It’s a long drive to Barnsley when I go down monthly mainly to spray. It’s somewhat disconcerting to arrive and find your nozzle is blocked. No liquid squeezed through. I took out the nozzle and confirmed that the pump was working. A nozzle is only a hole in a bit of plastic, (oh no it isn’t). I dare not tell you how I tried to unblock it. I admit trying a thorn.

It temporarily cleared, but some attached frayed plastic or something unknown immediately re-blocked it. Disaster. And then I remembered that in a small pocket in the strapping when in a moment of wisdom I had foreseen this very event I had secreted some spare nozzles. In that same instant I also remembered that I had cut it away!
My time was not wasted. My general incompetence has taught me to have second options. I had taken my ratchet loppers, my petrol driven hedge trimmer and a sharp Irwin Universal Jack Plus 880 saw (no one rewards  me for this promotion).
I spent my time cutting back herbaceous perennials, tree suckers and a weedy understory of holly, yew and other saplings.

My temper was not improved when rather fatigued I arrived home. I went to the Agritech website where I had originally purchased my Berthoud sprayer. They offered a fine range of nozzles. I wanted the yellow cone type and selected a packet of three. I went to the basket and found part of it a curious grey. I assumed that when I filled in my details it would go black and the none existent ‘continue’ button that I was told to press would appear.
I wasted five minutes. Unfortunately it stayed grey. I must have missed out a detail? I wasted another ten minutes figuring out what was wrong. In the end in frustration I went elsewhere. I admit in my ill temper I had difficultly in finding a suitable source. Beyond caring, I did find a blue cone kind and bought it. It came the very next day. As soon as I have finished my writing todayI will find out whether it is OK!

Of course I eventually realised that I was greyed out because my order was too small. I understand that, but why don’t they tell you. The loss to them of my order is nothing, nor is my meagre good will. To me my frustration was immense. At least had I been told....... I would have probably bought an extra packet or searched the site for something extra.
I was completely unfair to Agritech who are an excellent company. I later test-tried to put a single nozzle in my basket and a ‘pop up’ told me my order was insufficient. So perhaps I am just too stupid to sort out that grey

More serious stuff
Most gardeners are pretty vague about nozzles and sprayer calibration. Me too.
To a farmer extreme accuracy is needed. Not only does it hit them in their pocket if they overdose even by small amount they also have very varied covering requirements. For example they will need a fine spray to cover foliage difficult to stick to; a coarser spray to spread soil acting herbicides and a remarkably coarse spray to apply liquid fertiliser. Equally important are legal restrictions on dose rates of chemical. A crucial difference to the gardener is that they are spraying a uniform crop all over and they need to apply a known amount of chemical.

There is an enormous amount of technology relevant to sprayers and their nozzles. The matter of most interest to gardeners is the size of the hole and to this end they are colour size coded. And there I was thinking they were just pretty pastel shades in a mixed packet!

A small hole gives smaller droplets. An increase in spray pressure will give increasingly fine spray. The smaller the hole the further the sprayer will last before it is empty!
Unfortunately most of a sophisticated system of technology, regulation and training is of little value to a gardener!

What the gardener needs

Almost all the spraying I do is of the spot spraying, weed killing kind. I direct my spray at the weeds and the accuracy I need is to give each weed enough weedkiller to kill them and by my skill in direction not to harm my plants. So critical to the professional, who blanket sprays chemical over a complete crop, the dose per unit area is  completely irrelevant to me. Other than to avoid breaking the law or doing something really stupid.

The best approach for the home gardener is make up his spray to a strength appropriate for the actual weed problem. My scientist friend Peter almost always sprays at a one in fifty dilution of commercial  360 gm/litre glyphosate to water. I myself make up mixtures in the range between one in fifty and one in a hundred.

When I spot spray my gardens their are a great number of variables. These include the density of weed cover, nature and size of the weeds.
In my cemetery gardens there are paths, gravestones, trees and weed free soil. Within reason all are avoided. In many areas wanted plants cover large patches. My actual spray covers a very small portion - perhaps 10% - of the total area.

I recommend gardeners invest in a professional knapsack sprayer. For a serious user of glyphosate anything less is a cheap toy. And yes I do admit that I controlled all the weed in Bolton Percy cemetery with a small and less accurate hand sprayer for several years and when I visit family and friends use whatever is on offer!
My knapsack takes fifteen litres of water. Now in my dotage I only fill it to ten litres. The village plot is about 1800 square meter. Depending on the variables mentioned and also my mood and the season I complete my spray with between a third and a tankful. I admit the day I started the village plot ten years ago when it was a sea of ground elder and nettles it took a little more than my full fifteen litres!
When I go down to Worsbrough cemetery my ten litre of dilution usually covers between 1500 and 4000 square meters. It depends on the weeds! It will normally take me an hour and a quarter to empty my tank. I give this as a guide to a new user playing with pure water to sort out his technique and his nozzle.
My garden at home is one acre. Regular readers will know I am a plantoholic with thousands of plants, many rare and often packed together. In early Summer when my plants are maximally vulnerable to misdirected spray it takes me three to four hours to spray the complete garden. It might take two ten litre spray-fulls and I maintain the necessary intense concentration by splitting my time. In that time my garden is as a result completely weeded. In contrast in Winter when most herbaceous perennials are dormant and weeds are sparser I spin round in less than an hour and perhaps use a third of a tank.

I cannot imagine the time it would take to effectively control weeds in my garden if I did not spray. I would have no time left to look after my plants.

My spraying technique includes a range of pressures between one pull on the handle, a mere squirt, to perhaps three pulls for a larger collection of weeds well away from the plants. My pressure is a mere fraction of the sprayer’s potential (or the pressure used on a spray course designed for farmers). I vary the distance of my spray head from the weed according to circumstance, the closest almost touching. My nozzle usually points down although I will also angle it away from my plant.  I let my spray head hover a little longer over a difficult weed. I try to avoid spraying to ‘run off’  - other than on rosette forming weeds such as epilobium. Unless my weeds are close together when I maintain my squeeze on the handle I otherwise interrupt the flow with the spray trigger.

I have been playing with my nozzle

And the nozzle?
Although the anvil type is generally recommended I do not agree and always choose a cone one. You might prefer to buy a mixed packet of nozzles and try out a few. The nozzles are normally universal and not manufacturer specific. I am giving my new blue one a go for a few sessions. If I find my tank is emptying too quickly I will order a yellow one!

And how did I get on with my blue cone nozzle? 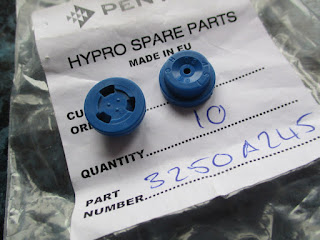 Very well so far and I have used it several times. The real test will be Worsbrough. It’s hard work for an old man hoisting a full sprayer on his shoulders and I do not want more than two fills on a visit! If a ten litre fill does not get me as far as I expect to I will be straight back to yellow!
In testing my new blue nozzle I knew that it would deliver too much liquid if I did not reduce my pressure via less pumps on the handle. I actually tried one thrust on the pump handle - no more than a squirt and rather a coarser delivery than I normally require. Because of this posting I put my pumping hand in my pocket to see how long the flow would continue. It did not stop! That surprised me! The flow is of course stopped when the trigger is closed.
For devilment I sprayed the whole garden on gravity flow. As my main weeds at this time are small rosettes of the wretched epilobium it was ideal.
I normally expect to pump harder to achieve a wider ground coverage and a finer spray distribution. In the large more weedy expanses at Worsbrough I might pump it three times. I of course let the pressure subside before pumping again!

And I have now been back to Worsbrough
With herculean effort and steely concentration I pumped a little less than I am used to. There were several clumps of Winter germinated cleavers and the usual small clusters of epilobiums, tufts of coarse grass and larger digitalis plants invading plant clumps. A range of spraying patterns were needed. The blue cone nozzle passed with flying colours (well blue ones). My tankful lasted one and a half hours and it covered well over an acre

You can read about my trouble with machinery here and here.
Posted by Roger Brook - No Dig Gardener at 08:12