Establishing cut leaf maples and the problem of acer dieback

Overcome these two problems and they are very easy to grow 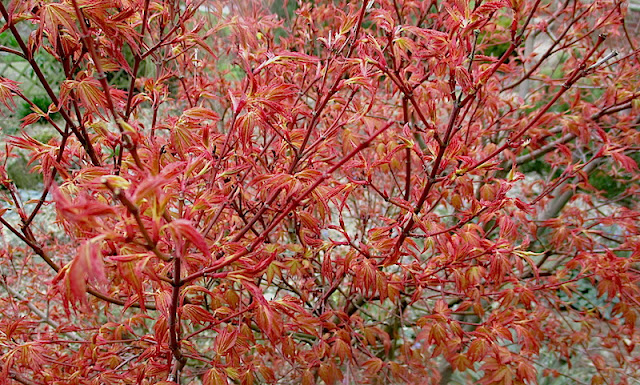 For years I failed to get Japanese Maples started and believed they needed shelter and shade. I am now more successful in getting them established and once they get going they withstand more wind and enjoy more light than I had previously thought.

Getting cut leaf maples going
My usual scenario was new young plants in the ground making new leaves in Spring and looking really healthy until hit by a couple of days of a cold drying Spring wind. The leaves would shrivel and die. The plant later failed to make new leaf growth and perished.

If you see young cut leaf maple leaves starting to show shrivelling leaves in dehydrating conditions you need to ensure the roots are not dry - but beware, the more likely explanation is that the ground is too wet and the rate of water uptake cannot manage to replace the water loss by transpiration. If you have a young plant still in its pot there may be time to bring it under shelter and for a plant in the ground to temporarily protect it. But it’s probably too late!

It seems to me there is a problem of a young plant getting its root system and its top into some kind of balance. As an example a purchased plant might have a large top which is out of balance with a smaller root system. More likely the roots of young maples have been slow to extend their roots when planted into the ground. If drainage is at all suspect, even for a very short period root growth is poor. Roots might even die. Young cut leaf maples hate cold wet waterlogged soil. So do established plants but once they get going are very much more tolerant.

Peter Williams is my expert.  Every year he raises young seedlings in his tunnel and also propagates named varieties by grafting. His advise on successful planting is to plant a larger plant already very well established in a large pot. If you have an unheated greenhouse it will be better for your new plant to spend its first Winter inside. If you choose to enjoy the lovely cut leaf foliage plant as a pot specimen outside in the garden for a year or two all the better; it can be brought inside for at least another Winter. Potted plants left standing outside in a wet Winter, even in well drained compost can be too wet - and maples are very sensitive.
When you eventually plant your larger plant out into a permanent position do so in Spring and remember in the first season when you run into dry weather to give it some water!
(I qualify this advice in my pictures when some of my own very large tub display plants have of necessity been transferred to the ground. With their very large and mature root resource they were planted in Autumn)
Several years ago Peter gave me six very healthy two year old cut leaf maples which I immediately planted after hardening off in Spring. The rabbits immediately ate two of them, one got trodden on, one died of drought under a tree. Two struggled on and were checked and torn by the wind before the rabbits came back. Be warned.
On the other hand I have ten very healthy large specimens thriving in diverse conditions in my garden.

This is a less serious - but a very common - problem and usually occurs on more mature established plants. This is not usually dieback of complete branches  - that is something different, sometimes when plants have been grown too soft in a nursery. Also distinct is the complete death that eventually comes to snake bark maples which refuse to survive on my soil.
It is more of a cosmetic irritation when shoot tips die. Usually no more  than a few inches. Unusually one of my plants where I had failed to give it earlier attention had this Winter brittle dead tips of up to six inches long.
I am pretty certain this dieback is caused by an infectious disease which might be fungal or bacterial - I really don’t know. When I had my own clients I used to find it all over Yorkshire.
The cure is very simple, just cut dead ends away. If you fail to do so for several years you might find you have a real problem. You can prune it out any time you see it, Summer or Winter. I use my secateurs either on individual shoots or more often in little bundles. You can even rub out brittle tips with your fingers, it’s very relaxing!

Peter observed that acer dieback has been particularly bad this year as a result of our wet Winter. I remember it was always worse in clients' garden when their plants were in heavy shade. It is a disease caused by high humidity and failure to prune out dead wood.

Photo-stories of my own cut leaf maples

Postscript
My reasons for fearing excessive winter wetness outside in small and therefore shallow pots in very wet spells is the not generally recognised phenomena that shallow soil profiles hold a lot of water against gravity which can lead to poor aeration and root death. I explain the principles in this fun post It is the reason why my small acer was placed in the greenhouse where I have control of the watering.