Will Roundup damage my plants?

How careful do you need to be when using glyphosate?

The answer to the above question is very careful. If you are one of those people who think you can dangle a sprayer and somehow your weeds will be killed and your plants won’t, you are wrong.
Glyphosate is one of the best herbicides ever invented but it does not know the difference between a plant and a weed!

Although knowledge and caution is required to use glyphosate some people  are excessively careful. It always amuses me when gardeners earnestly tell me how they bravely tangle a convolvulus shoot in a beaker of dilute spray for example! If you have a garden full of this weed that way takes for ever. With skilled use of a hand sprayer you might treat all of the bindweed in a small domestic garden in the time that others treat the weed growing over a single plant.

I confess I have been known to do fiddly things spraying such as to place inverted pots and tubs over a friend's delicate plants when surrounded by a jungle of perennial weed!

My article today looks at the balance between over scrupulous care and confident use.
You really need to read all of my glyphosate posts to become expert but today I would like to explore how far you can go.

A word of caution for experts
You may know that if working for clients that you can save them a shed load of money and hugely enhance their garden by using glyphosate. But beware. People who are doubtful about chemicals can be hugely sensitive to even one yellow leaf on a plant. You can kill client’s plants with impunity as a result of gardening  incompetence, ill timed pruning and inappropriate soil cultivation. Plant death as a result of shredding surface roots or chopping dormant plants by excessive digging might be regarded as 'just one of those things'.
If glyphosate has been used anywhere  in such a  persons’s garden it is sure to be blamed.
Plants are routinely sick and die for all kind of reasons. I have even seen glyphosate wrongly blamed  for leaf discolouration in places of higher horticultural education!

Some clients are extremely happy to pay you for toiling away repeatedly pulling out couch grass rhizomes. Some gardeners are very happy to take their money.

But accidents do happen!

I have used glyphosate for about forty years and must have used a fifteen litre professional sprayer more than five thousand times. Other methods of application such as hand sprayers almost as often. Most of the following have happened to me, not all and not very often.

*Walking on sprayed weed and then walking across a lawn.
*Not spraying a knapsack diaphragm dry of liquid and next using a lawn weed killer. You will only do this once!
*Using a leaky sprayer

*Spraying when it is too windy, particularly if the nozzle is held high and the pressure too great
*Attempting to spray at a constant pressure when you should be adjusting your pressure to the changing conditions.
*Using a cheap knapsack sprayer. If you are serious get a proper one at up to £200. Think how much more you spend on your mower!
*You might be aware that is safe to spray over the top of dormant bulbs and dormant herbaceous plants but neglect to observe they are starting to sprout. Some Michaelmas daisies and phlox are very sensitive to consequent short term damage.

Levels of skill
What a gardener attempts using glyphosate in his garden should depend on his plant understanding and level of practice. I have just made up the lists that follows but it might indicate a measure of what skills he needs and what he can trust himself to do.

Beginners
Spraying paths and open areas devoid of garden plants. Spraying fence lines and around artefacts in weedy areas.
Spraying under trees and large shrubs
Eliminating weed in garden areas that are yet to be planted
Using garden centre gels

Selective spraying that might depend on timing and extreme accuracy 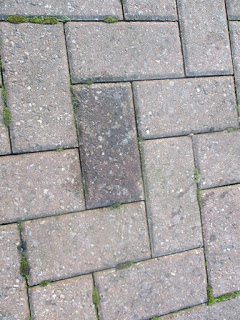 Using glyphosate routinely as a principle method of of weed control in flower and shrub borders
Recognition of circumstances when plants are extremely sensitive to mishap and  knowing when to use alternative methods of weed control
Good weed identification skills
Able to make 'management decisions' whether plants should be regarded as a plant or a weed!
Can maintain focus and care when spraying

* Normally spray commercial glyphosate diluted at between     1in 50 and 1 in 80.
* Usually your pressure will be a result of between four  pulls on the handle and as low as one. I have even used gravity flow for a mere trickle. 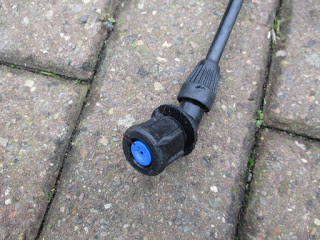 Links
My most useful posts for anyone contemplating using glyphosate selectively are ‘selectivity by direction’ and ‘selectivity by timing’
More than a dozen glyphosate posts can be found in my theme column
I described how I eliminated bindweed from Steven’s garden in a single morning. It never returned
(scroll to end of this post)