Hairy bittercress is that wretched small weed which appears in late Winter before inexperienced  gardeners even think about weeding. It germinates in empty spaces and soon starts fizzing out seed all over your previously immaculate  garden. Described as ephemeral, continued short generations bedevil you for the rest of the year. Unless you are alert to its rapid reseeding after as little as a month following emergence you will never be rid of it. 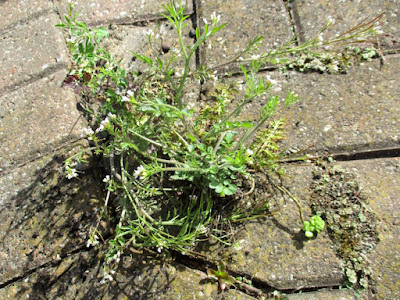 Rare as a weed when I was a child, it is a modern phenomenon. (Considering my age, not that modern). As a common weed it has been encouraged  by modernity and has been a product of the expanding garden centre industry over the last sixty years. How often has it lurked at the top of the pot of your new plant? Almost always!

Bittercress is the curse of the nurseryman. He has historically controlled weed in containers by using sterile or sterilised compost. He also uses residual herbicides to prevent germination of weeds that have blown in. Bittercress rapidly establishes on the otherwise clean standing ground for container grown plants. With its ‘exploding’ mechanical dispersal - known to the botanist as ballistic dispersal, bittercress seed is thrown in the air and is flung as far as a meter and straight into plant containers. It’s sticky seed coat helps it hold on.

Over the years bittercress has proved to be resistant to the nurseryman’s residual herbicides. The only one that actually worked was withdrawn because of licensing costs.
(Residual herbicides have never caught on with amateur gardeners  - other than as an ingredient in path weedkillers - but are widely used by farmers and growers)
And of course bittercress has been distributed to garden centres far and wide.


Being such a nuisance hairy bittercress has been much researched - especially in America. Although easily identified there are several forms. Personally I have two and possibly four. It is difficult to be sure because plants can vary so much with time of year and growing conditions. A survey of US nurseries identified four major forms (arguably ‘species’). The RHS name two species in the UK. It is difficult to botanically classify the various ‘tribes’ and ‘strains’. I do find my varied forms maintain their distinct habit and do not appear to cross fertilise.
You will have no difficulty in identifying all of them as hairy bittercress when they take over your garden. Superficially they do not seem very hairy to me. Leaves are actually quite smooth. The larger strains (or possibly just the more luxuriant specimens) make quite delicious salad and are not really bitter at all. Shame about the inevitable mouthful of soil.

Bittercress control
With difficulty! The actual killing is easy - its the timing and access that makes it difficult.
If you have got a clear run in more open spaces 1in 50 commercial strength glyphosate will surely kill it it. Unfortunately in the days it takes to die if it has started to seed it will continue to spit out more seeds to start all over again. Dare I say it, perhaps speedy diquat containing amateur products are better? (I do not personally use or advocate unsafe professional liquid-concentrate formulations of diquat for gardeners)

Hand weeding is fiddly, takes a long time and is often too late to prevent seeding. It is actually quite difficult to pull out when very small. I frequently break the seedlings’ necks by sliding my foot over them.

If you have dry windy days as we are suffering at the moment (written in April) hoeing is very effective. If you are sufficiently delicate to sever the weed at ground level it will quickly shrivel and die. Beware over enthusiasm and undercutting more deeply as they will reroot again. This is all very well but the soil surface is rarely dry when bittercress germinates all over on a mild February day


Peter Williams agrees with me that in favourable conditions hairy bittercress will set viable seed within three weeks of germination. If you have a heated greenhouse this can be through 12 months of the year. Outside give it nine months when it might be  active. Although it can  be a problem in Summer and Autumn I find dry soil surfaces restrict it and other than in wet spells I am barely conscious it might be there.
Unfortunately the weather patterns this year for me have been particularly conducive to bittercress and I have never had more!

My own control policy is if I see a bittercress seeding - which is most of its life - I kill it on sight. I bend my back and pull or scrape it bootwise or grab my hoe or point my spray. It must not seed! But oh dear how this year I have failed.
Many gardeners ask me how to control this weed when it is propelling its seed all over their borders. Sorry it’s too late.
The only way is constance vigilance, stop it seeding and get it out of the system. You might be in full control in a couple of years. That is if you don’t dig buried seed to the surface - although I must  admit it likes the settled soil surfaces typical of non diggers like me!
I know of one gardener who advocates very deep mulching to control weed from seed. If you have a clean start with no bittercress seeds popping and are perhaps prepared to cover the contaminated soil three inches deep (phew) I think this will work. Beware any aerial bombardment however. Nothing likes an organic mulch as a seedbed more than newly scattered hairy bittercress.

Thale cress
We have another horse in the stable. Sometimes actually growing alongside bittercress although this weed tends to be a nuisance in drier conditions. Superficially it looks very similar to hairy bittercress. It loves my own fine sandy soil.
It does not disperse its seed with the same vigour as bittercress but if does seem to set seed even quicker - I can scarcely believe this is possible. I was shocked in Peter’s garden today how tiny his flowering thale cress in his dry border could be. I have spent all Summer trying to see if thale-cress forcefully disperses its seed but it does not go pop for me.

More is known about the genetics of thale cress than perhaps any other plant. It is the darling of researchers. They love getting speedy results from its very short life cycle!
......I don’t.


Links
A fairly 'heavy' link to US research on bittercress

I have written about several weeds now. Look for your problem weed in my search box!
Posted by Roger Brook - No Dig Gardener at 12:10