Village volunteers have transformed Bolton Percy cemetery.
Only yesterday Brenda’s lovely hairdresser, Ros, reported that out of the blue two York friends had told her that it was their favourite garden and they made frequent visits.
It really looks lovely, is always open and if you live locally you really should go.
I was beginning to think myself an embarrassment and now was the time to quietly step back from my duties. Team leader Jackie Giles was horrified and refused to accept my resignation and persuaded me to continue with a reduced input of four working visits per year to spray and advise.

Eight weeks later I received an urgent e-mail. The bottom of the cemetery had got out of hand.
My gardening  philosophy is built round the principles that after first eliminating perennial weeds you give frequent attention to weeds from seed and use dense planting to keep the soil weed free.

Of necessity my method of weed control when I left the village eighteen years ago was to be monthly glyphosate spraying. Not nearly enough but my modified approach of generous clumps of dense planting, surrounded by gaps and trails of more open spaces worked very well. Sometimes if I lapsed after five weeks or so, weeds from seed became rather intrusive and unfortunately when sprayed looked rather scruffy.
Imagine how overgrown it gets after two months. Traditional weed control then becomes a nightmare. I am told the team spent two solid days preparing for my recall!

They should not have worried. It took only forty five minutes of knapsack spraying to spray all the weeds in this section of the graveyard. Readers might be interested in my methods in detail and why they are speedy. It had been my intention to write short notes about glyphosate spraying at the end of this post but have now decided it more appropriate to post a dedicated article tomorrow.

This corner until last year was under the heavy shade and drought created by a thirty five year old Leyland cypress which for my sins I had planted myself.
The stump of the tree has been carved with a chainsaw into a cross. Jacky's new planting looks really lovely

Choisya ternata 'Sundance' is one of my favourite structural plants which offers evergreen scented yellow foliage and stunningly scented white orange-blossom flowers in July.
Rosa 'Nevada' held back by shade for years has had a new lease of life.

Former colleague A.J.Thompson once gave  me a cutting of this beautiful scented rose. I do not know its name.


Visitors always remarked on the slug free hostas. I would explain they preferred the organic debris 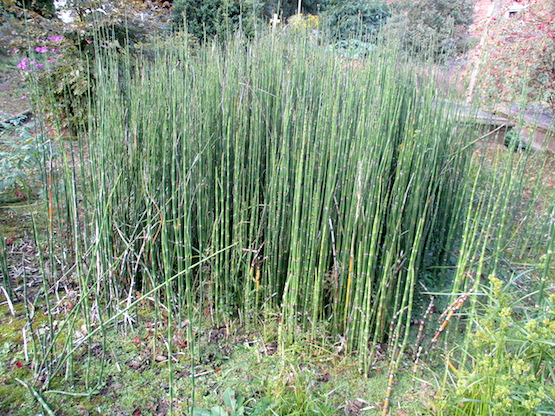 Two years ago I worried that this marestail would take over the churchyard after I had gone. I killed it with a single spray. Find out how in the link at the end


A kind benefactor has donated a small sum to remove the wooden edging. The neighbour's new fence where another Leyland cypress was removed will be softened by current planting

Link
Although the equisetum was not the regular thug I think my method would kill that too. Numerous references to Bolton Percy cemetery garden are to be found in the theme column. Also to the Worsbrough cemetery from which now I have really retired.
Articles about glyphosate are littered all over