Four gardens, three soils, same drought… and how did none diggers fare?

This post like Topsy this has grown - unlike some of our plants. There are issues of people and soil type but also those of how a soil is managed and it’s a long time since I tried to persuade you minimum cultivation is best. It has to be a two parter. Here is Part 1


Today I focus on four gardens and three soils. Mike and Isobel have recently downsized from a large house and a huge garden. They have suffered the heaviest of clay soils and you can imagine their initial, now regretted, delight that their new house in Upper Poppleton is on sand. A genuine sand. The kind that ticks all the boxes of popular gardening lore, it holds little water and is sharply drained. Dig down a spit (ugh) and you get to pure sand (ugh).
They have already discovered that if you water a drought established plant in settled soil their water runs sideways and does not sink in like their previous well managed clay. Welcome to soil hydrophobia, that phenomenon where really dry soil repels water (not to be confused with dry puddled clay that is hard as a rock).
They are starting  to treasure the clay soil in the huge number of potted plants brought from their old garden. They can’t go back for more.

My own soil texture is on the borderline between silt and sand. Around here we constantly argue whether it is coarse silt or fine sand. Soil scientist Peter Williams assures me we both have coarse silt and we both agree it is an alluvial deposit of the river Derwent which thousands of years ago meandered our way. When I dig down deep I get to pure sand (er, silt). If I dig a metre or more I get to pure clay (Never done so but the name Brickyard Farm down the road gives a clue). My clay provides a deep basin that holds water. Wonderful now but not ten weeks ago when the lower parts of my garden were still flooded. The high parts of my garden at present are horribly dry.
My silty soil suffers from hydrophobia too but its fine texture ensures that when thoroughly wetted as in my pots, tubs and planters it is very water retentive and needs less frequent watering than any modern compost.
Peter down the road is a borderline digger. and makes most of his seed and potting compost from decayed grass and Autumn leaves)

After endless rain up to eight weeks ago the proverbial meterological tap has been turned off and we have had zero rain for eight weeks now. Worse the temperatures have been high, the air has been ridiculously dry and even on cooler days it has been windy. Peter observed dehydration in the wind  has been worse than in sun. You can almost see the water level in my ponds plunge.

We visited Mike and Isobel last week. Their plants were wilting and the yellow lawn crunched. Not only have they for the first time suffered a water meter they now find that water pressure in Upper Poppleton is miserly low.
Outside their front door was a huge pile of excavated bone-dry yellow sand destined to be used in a new border. I suggested it might be ameliorated with the wood chippings from some recently felled trees. Best of a bad job.
Isobel’s March planted beech hedge has needed a furrow to be laid alongside it to retain water and is needing twelve gallons a day. (I don’t approve of the frequency, better less often and more each time and in total less)

Peter too suffers a water meter. Apparently water is about £3 a square metre. That’s 0.3 pence a litre. (Published water rates are as opaque as the prices of other utilities and my figure includes the 95% estimate of water volume wastage that is deemed as the effluent cost)

I did a back of the envelope calculation and if I were on a meter my Shirley size tomatoes would each cost almost a penny each just for the water. Worth every penny!

Peter has a small nursery to irrigate. Like me he does not generally water established plants in the ground. He has broken this rule for notoriously shallow rooted rhododendrons and azaleas.Without water many of these plants would die  Last time I called he was watering away. 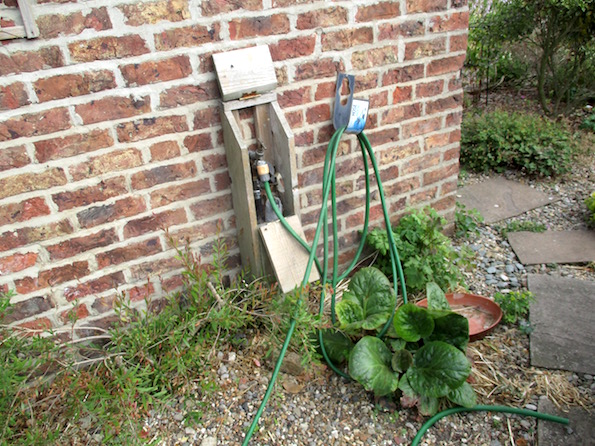 I have taps that run off each side of the house. I also have a rather ‘Heath Robinson’ eight inch deep buried hose that when turned on for a few minutes fills a 15 gallon tub next to my greenhouse. None diggers get away with such stupidity and Brenda constantly moans. I only use this tub when I want the odd can-full of water.

My long watering run is delivered by 50 metres of hose. I use a much shorter length for our small courtyard. I have a total of about a hundred tubs and planters and in addition there is my greenhouse and a small nursery around it. Within the stretch of the hoses are several drought prone plants that intermittently get a generous splash. In this weather a full run takes well over an hour and is needed every three days (two days in the case of the tomatoes which are in ten litre pots of my soil/char compost).

I prefer to water in the morning when the pressure is high.
Brenda walked around in disgust last week and claimed she found several plants dying of drought. She spent several hours carrying out emergency watering. All the azaleas perked up but at least three shrubs are now on emergency watch.

I will let the pictures do the rest of the talking


My formerly elegant evergreen coronilla suffered deep root death in the Winter wet, was stripped of its foliage by the beast from the east, was starting to recover and then came the drought. Who would be a gardener?


I am in trouble if I miss the bird bath


Flooded for three months this Winter these moisture lovers are still happy although the gunnera is half its normal height and off picture the astilbes are severely wilting.

Part 2 of this post will appear in August and will be a little more specific with regard to minimum cultivation. It will also record what happens next. There will be pictures of Peter's garden too.

There are no links at the moment. If any of my comments tickle your fancy please interrogate my search box. You will be surprised what you find

And as I publish today still no rain
Posted by Roger Brook - No Dig Gardener at 07:24