In my youth I got a bad impression of michaelmas daisies. My parents were not gardeners. They avidly listened to Gardener’s Question Time after Sunday dinner but remembered nothing. Perhaps just as well but a chord was struck in my innocent young mind.

The michaelmas asters in their garden must have been planted by a former owner. They were the kind that you give to friends to get rid of them (the friends as well as the daisies).
They were tall and straggly and grew with some vigour swamping their neighbours. They dripped with powdery mildew and by flowering time the insipid lavender flowers were surrounded by brown or yellow dead and dying leaves. Time to cut back - the flowers were not worth keeping!
It took along time to learn to love what is now one of my favourite plants. 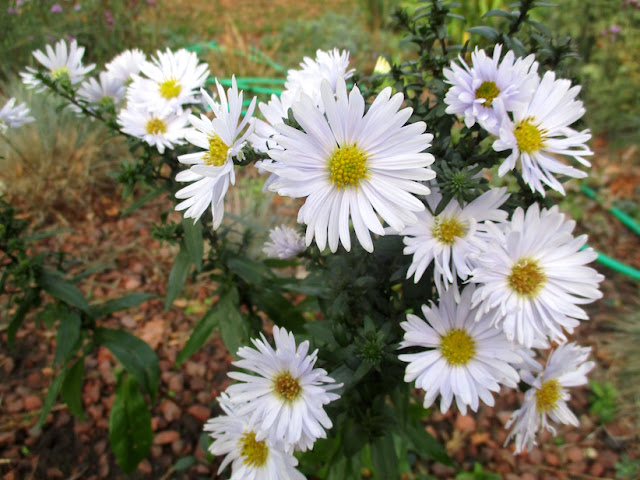 As is my want I scanned a few references before writing this post. To my horror I found the botanists had been at them and changed most of their names. No longer are they asters. A website gardener gallantly declared they were rather nice names. Symphyotrichum and Eurybia. I don’t really think so. They will always be Michaelmas asters to me

The problem of powdery mildew


This air born fungus disease has long been the scourge of Michaelmas  daisies. Less so now with resistant new varieties and recognition that certain species such as Aster novae angliae and Aster amellus are completely resistant.

Many novi belgii varieties are still very susceptible and in principle might have done very badly in this severe drought year. Fortunately this has not my been my own personal experience. I wonder how readers faired? Heavy Autumn rains in some areas might have come to the rescue.


It's in dry conditions when plants suffer moisture stress. It seems to me to be almost invariably where aggressive water seeking roots of trees and hedges dehydrate the soil
Trees and shrubs are also offenders in that shaded leaves of the daisies stay wet with dew or light rain much longer than plants in open positions. In these conditions fungus spores germinate and thrive.
As a triple whammy trees and shrubs create shade. Most Michaelmas daisies need full light - such plants have more resource to fight mildew


You might correctly conclude that your daisies need an open position in moist (but well drained) soil rather like the water meadows where many of their ancestors come from.


All are mildew resistant varieties, are in full light and grow in my sandy/silt soil and of course are never sprayed. In Spring after excessive rain the soil was at maximum water holding capacity. I constantly despaired when in the following five months we only received a miserly six inch of rain. Fortunately most of this came on just three separate spaced out occasions and penetrated more deeply than repeated light showers - the latter so conducive to fungal spores.
My topsoil gives way to a two metre layer of pure coarse silt/fine sand. I think my daisy roots just kept going down and finding water.
Most of my daises are the  novae angliae kinds and  other than Aster amellus none have been watered. They have just loved the sunshine and thrived. To my surprise my two novi belgiis have done equally well. 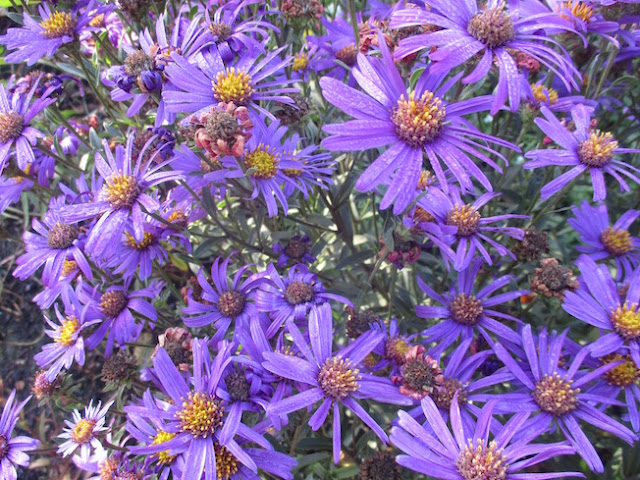 As you might guess my daisies are not staked even though some of the novae angliae kinds are six foot high. Some are a little uneven but that is my way.


I am also unorthodox in that when I plant herbaceous perennials they stay in forever. No labour intensive quadrennial transplanting for me. Some of my daisies have been in place fourteen years now.

For propagation most michaelmas daisies can be divided and transplanted at any time - even in Summer if you cut back the tops. 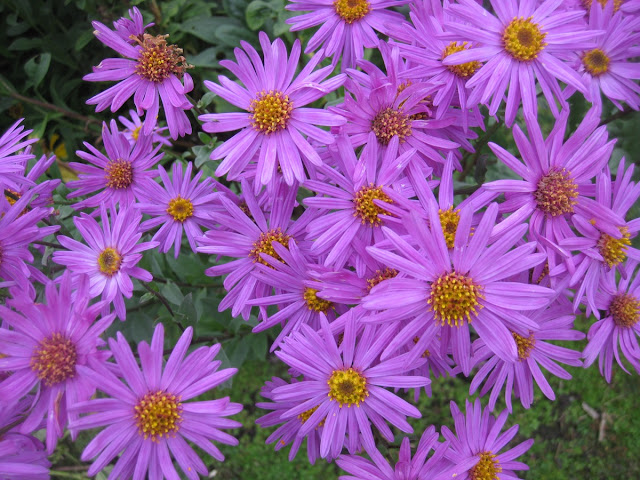 Aster amellus is one exception and really is quite fussy - best early May or very early Autumn (still in flower) and never in Winter. 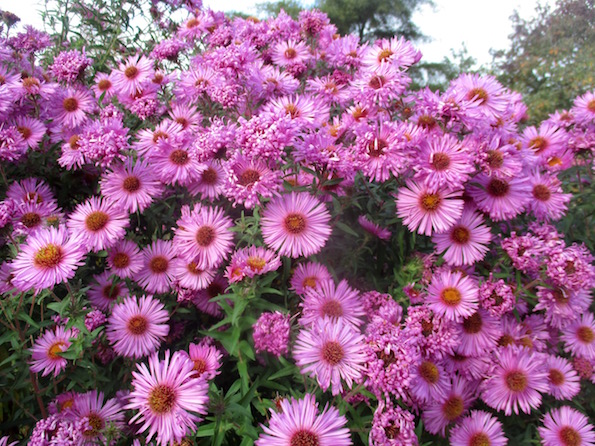 Readers will know mine is a glyphosate garden and most of my weed control is done by this wonderful herbicide. Exceptionally Michaelmas daisies (as do phlox) seem sensitive in Spring before and as they emerge. I have learnt to be really careful. Later in the season large plants are much more resistant to a poorly directed spray.

Michaelmas daisies grow well on most soils and are fairly tolerant to poor drainage. Last Winter was exceptional and parts of my garden had standing water for a long time. I lost one plant and another sick novae angliae convalesced to only half the height of its identical neighbour.
The village plot has been flooded for several months in two Winters now. No daisies survive bar one. (Fortunately a village wide drainage project will make it worthwhile to plant more)

The Garden Centre’s curse
When I look at my dozen different beloved long standing varieties there are none bought at a Garden Centre. I mean those shops of the glitzy kind where you are obliged to walk through copious frippery to get to the plants.
All mine were obtained from specialist nurseries, plant fairs or mainly gardening friends. I have bought plenty at garden centres but none have survived. They have either died or I have thrown them away.
What goes on when garden centres are supplied by such very fine growers?
Trouble is such grower’s perfect product is a nice display on the sales bench. Who cares if it actually grows in a real garden.


I have written before about soft plants forced in polythene tunnels with artificial heat, loads of nutrients and perfect propagation compost. Compost ideal for its purpose of wet speedy liquid fed production is not really suitable for the garden. Once the protective systemic fungi wears off such plants succumb to all manner of diseases - that is if the wind or cold has not shredded them first. In the case of many modern Michaelmas daisies the dwarfed flowering display never looks so good ever again - when the dwarfing agent wears off and the mildew takes over.
You will see from the pictures that I have been tempted yet again.