My garden each month, January

I have made a new year resolution!

It is to report what is happening in my garden each month. Every year is different with new triumphs and disasters - some tiny shimmers when some gardening gem reappears or deep gloom when a shrub bites its head off. Major events such as flood, drought or cows crossing the garden. It won't all be pretty but if I snap any nice pictures I will surely show you. I will sometimes cheat when previous year's pictures are better than this time round.

All gardens are different and mine is more different than most (this is not intended to be complimentary) and not all I do will be relevant to you and sometimes you will look on with amusement or even distain.

My twin ponds have become overgrown. For eighteen years now I have merely scooped out unwanted vegetation, leaves and litter with my upturned scarifier. All of sudden what was welcome cover for the fishes has become somewhat excessive. I have been indulgent with the hippurus horsetail, wilful with the water bean and cavalier with my oxygenators.

I think part of the trouble was last years's drought and Brenda regularly refilling with tap water. (Regular readers will know I always blame my beloved). There is more nitrate in tap water than you might imagine and did the plants grow! (permitted levels are below 10 ppm are completely safe)

I have given it a much more thorough clear out this January. I have used my normal methods but much more intensively. I dragged out everything that I could find. (Not the water lilies which have spread out of their containers). In all I have removed twenty piled barrowloads.
I like to divide such heavy jobs into repeated short efforts. It took several more sessions than my hour on New Year’s day. Under the thick mat of surface vegetation it was surprisingly clear and the amount of well decayed organic matter accumulated at the bottom was not as much as I feared and is so well decayed it is unlikely to deplete oxygen and I am very happy to leave it.

The pollution in the above picture looks pretty bad. I have encountered it before and it has quickly disappeared after clearing. It is toxic to fishes and can be very serious in overgrown waterways 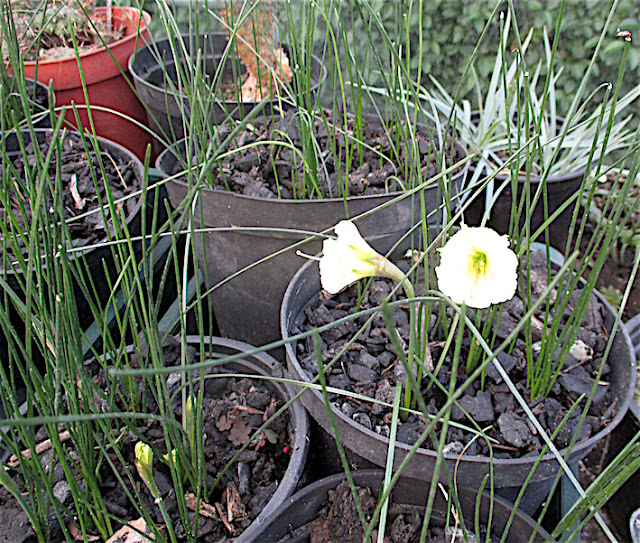 Five years ago Peter gave me a pot of seedlings and I have been building up my stock by annual division in alpine pots in the greenhouse. I just love them and now I have enough stock to try them outside
I was heartbroken in October when a snail went on a rampage and grazed to the ground emerged centimetre long shoots. The snail was soon dealt with and the shoots regenerated. I have been reading how plants rapidly internally transmit warnings of a predator and seem to know whether the best survival strategy is to keep on growing or die back. The ones radulated by snails are now flowering as well as the others.
I was puzzled why another pot failed to emerge until two months after the others. I think that when I divided them they went to the bottom of the pot and perhaps upside down. They have caught up and are now looking fine 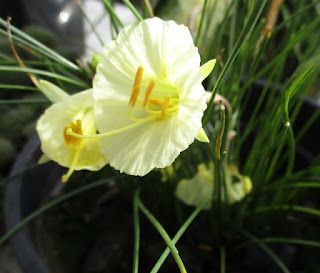 No flowers on Garrya elliptica 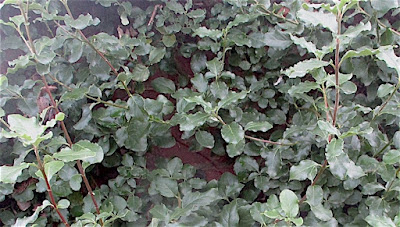 Last year the beast from the east ravaged a magnificent display of my best ever long dangling catkins which at that time we had enjoyed for ten weeks or so. It eventually regenerated with strong growing shoots and this Summer it escaped my over enthusiastic pruner (guess who). My reward has been zero flower production!
I conclude that in our long lasting drought new growth came too late and inhibited flower bud development.


Daphne Jacqueline Postill loves my sandy soil and has spread to make a very fine clump. We nearly lost it in the double Winter of 2010 and it took a couple of years to return to its earlier glory.
You would imagine from the prolific shoots it sends up from the ground that you could easily divide it. Not so, dug out rooted shoots usually look promising but eventually go yellow and die. I have succeeded only twice with two rather large pieces and now have three very fine  plants, one in a large tub, and all give gorgeous penetrating pink perfume January to March

Readers fail to identify daffodil but David steps in

Some of last years daffodils stood in flooded garden for three months in last years exceptionally wet Winter. They have not turned a hair and this year they are now emerging strongly. I had forgotten the name of my earliest variety and turned to daffodil expert David Willis and he gave me its name. You don’t see it in all the bulb catalogues but it is very well worth buying.

Cutting back dieback on cut leaf maple
Every year my dormant cut leaf maples (and some of the dogwoods) show frizzy white dieback on young shoots. After last year's drought one plant  was particularly bad and I have ruthlessly pruned out some large pieces

No reward for pressing this link to be the 10,000th reader about Garrya elliptica

Cut leaf maple can be difficult but is well worth growing

I wrote about my twin ponds last year

Apologies for the glych I had publishing this post