I wonder how many gardeners have been sucked into buying expensive products that litter the internet?

I wonder how many trees have been chopped  down to make charcoal to satisfy misguided carbon incentives? (Not here in the UK but in the big wide world)
I wonder how many UK farmers apply char to their land?

Biochar has wonderful potential and worldwide research continues and many successful schemes are up and running.
Never the less I am getting a feeling that our earlier high expectations will not be fulfilled.

Recent bringing together of research findings suggests that most UK agricultural soils are not responsive to biochar in terms of yield. Although char might be a basis for sound husbandry and healthy production it would seem that UK farmers however much you demean them are achieving maximum production already on the basis of present technology and adding char for most gives zero yield increase. Adding char is not inexpensive and would seem to bring no benefit to the bottom line.

In contrast worldwide where many soils are acid and lack nutrients and nutrient retention, yield increase might typically be 25% and sometimes very much more. It’s in tropical agriculture where there is the greatest potential.
Figures for UK forestry are rather better than farming and growth increases of perhaps 10% reflect the general starting infertility of land chosen for trees.

Overview
My own experience is that charcoal which is a very strong nutrient absorber has a negative effect if applied raw. My own homemade char gets at least a year with generous nutrient addition as fertiliser before I apply it. It stands outside in the rain to expose products of combustion to amelioration and nutrient absorption


It is the nature of many biochar experiments that they are done too soon when the char is still fresh. In my opinion It is a major requirement for early soil addition that it should be fortified with fertiliser.
Many researchers resent having too many variables and I feel this vital priming is often either insufficient or even neglected. The ancients who over centuries laid down Amazonian terra preta in effect composted it when it was initially stored in their ancient middens. It was regularly applied to the soil in small quantities from what was essentially organic waste. 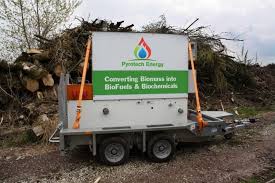 James Lovelock envisaged every farm having a pyroliyzer that carbonised organic waste such as woody prunings and residues inappropriate for direct soil application. It provides gaseous energy rich liquid in addition to conserving carbon as char.


The results of adding charcoal accumulates over the years. Included in the myriad of its recorded advantages it hugely encourages mycorrhiza that intimately attach themselves to char’s internal porous structure. Mycorrhizal  hyphae extract plant organic compounds (products of photosynthesis) which help nourish them as they infiltrate plant and soil. In turn their slow eventual decay produces glomalin which binds soil particles (and char) together.


In our short term society long term research on biochar is stymied and a farmer might go under waiting for long term crop yield.

Five years ago I was certain that our local organic waste disposal unit would by now be charring the mainly woody waste product it processes. It’s not going to happen


Readers will know I make my own char by dousing my garden-fire embers with water. I guesstimate that half the woody debris that feeds the fire is converted to char. (The rest burns away). I have two or three large fierce fires a year. I energetically feed them and they burn down in little more than an hour. What would otherwise take as much as a day to burn through is immediately extinguished.
It takes more than a year to prepare the charcoal by weathering and fertiliser addition. It is quite lumpy and I do not sieve it. No more than a thump with the back of a spade.  For some uses it would be better to sieve.
I do not know how my char compares to that produced in a commercial pyrolyzer - somewhere between slightly inferior to somewhat superior!
I now pity those gardeners who let their garden fires burn through. What a lost opportunity!

Some might disapprove of garden fires and some of you might be unable to have one. I make no apologies for here in the country having an occasional fire. Its environmental harm is probably no worse than so called green methods of disposal and in contrast it’s effect is hugely dwarfed by pollution caused by domestic wood stoves.The very long term conversion of wood to carbon means a little less carbon dioxide in the air.

I have been adding my homemade char to my vegetable garden for twelve years now. Mainly left on the surface or sometimes lightly forked in, essential planting and lifting and moles (!) have ensured that it eventually is buried. Not sure about the work of my prolific worms. I understand that an Amazonian species is an important part of historic terra preta formation.

Unfortunately I no longer grow vegetables and have reported that for two years now I have sown vulgar displays of annual flowers. Oh what a waste but the flowers grow wonderfully strong;y and from only a light scattering germinate freely. (Some research has suggested char might inhibit germination)


I have changed my focus to using my char to make up my seed and potting compost. I have reported this elsewhere but might mention last year my tomatoes were my very best ever. Perhaps 40% char mixed 60% with my sandy soil was perhaps best but I have had excellent results with up to 80% char. My tomato compost gets eventually recycled to my other container grown plants. Just like my soil in the garden it is used to grow new crops endless times over.

My char based compost is quite lumpy for sowing and pricking out and is rough on the fingers! Surprisingly surface sown fine seed germinates rather well but for densely sown seedlings the compost is too coarse to other than patch out. Large seed such as tomatoes needs to be well covered and if sown thinly they  plant out really well.
Needless to say my precise mix and fertiliser addition is somewhat intuitive! None of my char is used fresh and without prior long term fortification with my yaramila fertiliser.

I understand serious research is looking at using char as a peat substitute in commercial composts.

Char in composting (I mean the compost heap kind)
Although I am not a composter myself I think char has very real merit in making garden compost. The trouble with good compost is that it does not last long in the soil. Tops about five years before it decays away
In contrast the great thing about char is that it lasts for a century and in ancient terra preta very much more. I suggest as gardener’s start to use char in their compost they will find it lasts very much longer than before.
I would love to hear any reader’s experience.

Links
I have written about most of these things before! To read about char in more detail you will find my previous articles if you use  the search box at the top of this blog. Useful keywords include char, compost, terra preta, yaramila, glomalin, humus  and mycorrhiza