Myth buster Robert Pavlis is back


For readers of his Canadian /US myth busting blog he never went away! Where do all his myths come from? His fertile mind seems to generate them from nowhere. When I started blogging I had perhaps twenty gardening stupidities in mind on which I could bare my own prejudices. In his two books he has reached over 200 myths and if you go to his blog there are more.


When I received his e-mail to tell me he was forwarding his new book Myth-buster 2, I inwardly groaned (I lie Robert, I am immensely grateful). The thought of ploughing through all those gardening inanities was too much to bare.

As ever of course his razor sharp mind picks up and dissects myths major and minor. His new book goes further than before in distilling from each myth sound advice on good gardening practice.
The patience of the man! From the worst and most shallow of social media chatter to real gardening anomalies he gives the same precise well researched documented analysis and is fearless in rubbishing snake oil salesman and those who peddle propaganda, distorted science and just plain lies. 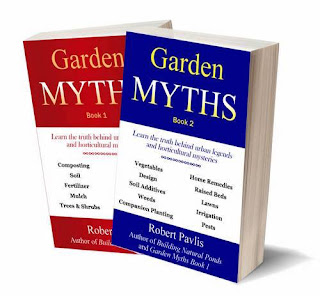 He shows endless ingenuity to find myths in the most innocuous places. For example, trivial and silly gardening tips are dissected and given undeserved  attention.
I lose the will to live when he tackles the value of some of the tat that none gardeners add to their soil.

Some questions like “are plastic plant containers a danger to human or plant” uncover someone’s belief system and the answer covers half truths and myths alongside undeniable facts.

Snowdrops are best planted in the green - myth


This illustrates how Robert can correctly find myths in sound advice! Every good gardener knows that snowdrops moved in the green (that is planted or transplanted as green plants) grows better than dry bulbs from the store. I myself expand this advice to transplanting right through from first emergence to complete dying down.
But of course Robert is right. Snowdrops plant perfectly well as green plants or dormant bulbs direct out of the ground whenever you do it (if you can find them in Summer) - with the obvious proviso of suitable planting conditions. Dormant bulbs are fine - even best if you lift and replant the same day. (This period of grace might in nature last for months in Winter when animals have dragged bulbs to the surface).

The difficulty with planting dry snowdrop bulbs bought at the garden centre or even from reputable bulb suppliers is that they might shrivel and even die in the rough and tumble of marketing, transit and display.
I hope my casual unresearched concluding remark does not create a new myth - perhaps snowdrops in a sales display merely go hard and dry.

Nitrogen fixing plants share their nitrogen with their neighbours - myth


As a so called expert one combs others work to find things one disagrees with. On the face of it challenging this long cherished tradition of gardening lore must be wrong. Reading on, Robert does not disagree with the long term benefits of an increased nitrogen resource when legumes decay into the soil, merely that they don’t directly share fixed nitrogen with their neighbours.
Fixers keep nitrogen to themselves and even when they die most of the nitrogen goes into their seed. Indeed nitrogen in the dead haulm might be less than from other bulkier plants.
I do find it a little surprising that some plants might not form symbiotic associations where nitrogen is shared between them - but apparently not so. I also wonder if natural organic exudates into the root rhizosphere inevitably leak nitrogen.
Robert’s piece in the book confines itself to the association between grass and clover but he expands the subject on his blog. I did enter into correspondence with him when I sent him a picture of a glorious green patch of grass and clover shining out of yellow faded lawn at Edinburgh Botanic Garden two years ago.

Peter Williams and myself have been back up to Scotland  and eagerly pounced on the said patch and Peter took numerous photographs. Was the green just the dark green clover or was the grass extra green too? We concluded it was.
In itself this proves nothing. Could it be nitrogen from a fairy ring type fungus, could it be that the soil round the clover was more sheltered or warmer? You can’t jump to conclusions.


American gardens are different
Although we have so much in common in our gardens we Brits need to bare in mind that the book is written for a different gardening culture. One with different mores and expectations. I discern that Canadians and Americans are more victim to fashionable whims and bombarded with more devious products.
More significant the continent represents a huge land mass with large variations in climate and soils. Their gardeners might find conditions much more extreme than our own.
In the north it can be cruelly cold and in contrast when did we last suffer from problems of excessive light intensity on our trees?

When Robert talks about lawns he needs to cater for huge variations.

Did I find any errors?
In his analysis of myths I find almost total perfection. I might look askance at such things as his suggested soil preparation where there are so many variables - but then I would be equally vulnerable to criticism myself.

I did wonder about the odd ‘throw away remark’ but not sufficient to run to google.


I prickled a little at the bald statement that tomatoes need no more magnesium than other plants. Perhaps it is true. American gardeners have a big thing about using Epsom salts (magnesium sulphate), for multiple purposes — almost all wrong.

We would have to have a serious conversation about Robert’s assertion that sandy soil evaporates more water than clay. What on earth does he mean?  (Inadvertent pun)
……It just dawns on me later that it would be along the lines that sand which holds significantly less water against gravity than water-retentive clay does release a greater proportion of this limited amount to evaporation and transpiration through the plant - but in terms of total loss it does not….  Clay provides a much greater water resource for plants (to transpire) than does sand.

Myths I like.
Mainly in terms of confirming my own prejudices I loved the following debunkings. Forgive me Robert for imposing my own spin.

1. You should give your lawn roller to your worst enemy

2. Raised beds need compost - myth
And by my own extension fertiliser enriched soil can be used for large pots.

5. Analyse your soil before you fertilise - myth, only very rarely of value

6. Organic fertilisers are more eco friendly than inorganic ones - myth
7. Using purchased bacteria and mycorrhizal fungi is a good thing - myth, it's a complete waste of time

8. Adding peat to your soil will acidify it
Partly true but very little and short term