I remember how I avidly devoured a series of school programmes called ‘How things began’. I want to say pre-school but on reflection it might have been in the school holidays. (On further reflection school programmes did not go out in the holidays - the timing is not a false memory).
I started a lifetime of intense interest in evolution - although  actually it was never even mentioned at school

I only formally learnt about evolution for A level biology at Hartlepool Technical college (N.E. grammar schools did not deign to teach things biological). I remember an early essay about evolution when addressing the concept of animals appearing as from nowhere in the fossil record and often remaining for millions of years almost unchanged before becoming extinct or still surviving.
I remember mentioning hybridisation as an explanation for this phenomenon of apparent sudden appearance in the fossil record. Metaphorically my suggestion had a thick red line drawn through it.
I know the conventional explanations but in truth evolutionists have always blurred hybridity over.

Nowhere in the school version of evolution did hybridisation appear. Everything was in a straight line and nature’s new innovations were never shared.
Schools still teach that rag bag of horse ancestors as if one came directly from one another whereas in truth in evolutionary terms they are not even in the right order.  If you regarded them as close relatives which sometimes got together you would be nearer the truth. (Impossible with the actual examples that are distant in time and distinct in genome). The arrow of our much beloved genetic trees would seem to be broadly true but much more meandering than generally portrayed.


My next foray into hybridisation was at Wye College when in a student exercise in public speaking I had to give a talk to classmates on a research paper called ‘heterosis versus variety’ in relation to breeding tomatoes. It is etched on to my mind
Heterosis is the posh word for hybrid vigour and is associated with bringing together of two inbred genetically uniform distinct parents (albeit actually close in genetic distance) where off-spring tend to be uniform heterozygotes and lacking in often inferior paired recessive genes. (don’t ask).
It requires the cross to be repeated for each new generation of seeds which suits seedsman very well.
I subsequently learned that all the advances of bringing distinct genes together can in much more expensive longer breeding programmes be stabilised in true breeding varieties.
I would imagine advantages of hybrid vigour become stabilised in evolutionary processes too

Influence of Agriculture and Horticulture


Perhaps in the popular mind creation of horticultural hybrids bare no resemblance to the process of evolution. The elementary text books would have it that way and indeed any hybrids are an inconvenient aberration.

We gardeners and farmers meet hybridised plants and animals every day and just about all the plants we grow in our gardens are hybrids. I don’t mean immediate hybrids between distinct genera and species although there are thousands of those too. Just between varieties and closely related forms. They all have numerous hybridisation events in their long ancestry, some more distant genetically but most more closely related. Just think of promiscuous aquilegia species that cross and seed themselves everywhere.


In the popular mind hybrids are some kind of aberration. In truth they are an integral part of evolution and a means that diversity is created and shared.
It is almost universally excepted knowledge among professional botanists that half of the world’s plants are hybrids. I suppose they mean theorised from known or mooted hybridisation events over the past few thousand years. Go back through evolutionary time I believe all have been influenced by hybridisation on many occasions.

A popular illusions about hybridisation
It is less relevant to animals


Certainly for want of a compatible partner animal hybrids have less chance to breed. The more distant the cross the less fertile a hybrid will be and such as the mule are said to be sterile (on the net you will find opposite claims).

As already mentioned most hybridisation events  are between fairly close  relatives and a substantial number are fertile.
Even rare extremely distant crosses where the odds against fertility are thousands, even millions to one might have the chance to procreate. Such odds are as nothing over evolutionary time

The most likely partner of a new hybrid is one of the parent species. If in rare events the progeny of a first or early cross are geographically isolated or in some other way physically separated they might start new evolutionary lines. New species can start this way. In fact some people think almost all new species start this way.

A new hybrid’s most likely fate is that they are subsumed into one of the parent lines as succeeding generations mate. Even though such hybrids are ‘lost’, genes have crossed over from species to species and if some are advantageous will potentially be repeatedly passed on as 'near' species mate. (A to B to C.... ad infinitum)


This process is known as introgression and I believe it to be very significant. Not only significant, but in terms of millions of potential liaisons universal and common.

Hybridisation news
I try in my posts on hybridisation to report new developments as the world starts to embrace hybridisation’s evolutionary significance. The new atmosphere is well illustrated by a post on the BBC website which inspires two of the three items I mention today

1. New hybrid coral
Acropora prolifera (dig that name) is a natural hybrid that has been discovered on the sea walls in the vicinity of Miami harbour and thrives there but unfortunately is threatened where colonies are inundated with silt.
Although it is sterile this is no barrier to distribution as corals propagate vegetatively. Efforts are being made to establish it out at sea and develop efficient  propagation techniques. It is a classical example of where an environment is inhospitable to parent species - virtually all have died out - and without their competition the new hybrid can thrive. In this case being sterile there are not even backcrosses involved

Recent discoveries of hybridisation’s major influence are being further entrenched in public acceptance by articles such as the BBC piece linked below. It provides many interesting links to recent research.
The program which mainly reports on recent discoveries does touch upon very early human ancestry millions of years ago (most evidence that can be gleaned from genetic analysis is relatively recent - perhaps a maximum of half a million years or so. The further back you go it becomes much harder to hypothesise where genes have come from).
It does puzzle me why our ‘recognised’ very early primate ancestors would have had such very long periods of stasis as suggested by the fossil record.
After all hybridisation is not new and has been happening since the dawn of sex in multi-celled organisms. 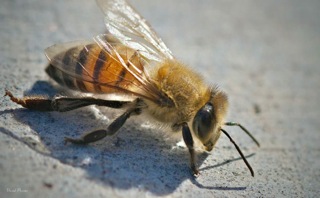 Thank you New Scientist for your story ‘chiller bees’
You will have heard stories about South American hybrid killer bees that are dangerously aggressive. You might have even seen films - both real and fictional stories of their aggressive ways.
It’s broadly true.
The original hybridisation was by a Brazilian bee keeper in the mid nineteen fifties He brought aggressive African bees from Tanzania in an attempt to strengthen the weakening populations of Brazil’s own domesticated european bees. Unfortunately the hybrids escaped and bred further with South America's own wild populations. Now they are found throughout and beyond South America. They are very aggressive indeed and are the sort of thing that get hybrids a bad name.
There the story might end except the hybrid bees arrived in Puerto Rica; it’s more densely populated than most other places and for bees has a hostile climate where natural selection is extremely acute. Within a decade or so extremely docile swarms started to appear. Even better they were prolific producers of honey and healthy. They are thought to have huge potential through further hybridisation to improve world bee populations. This time with necessary safeguards.
The genetics are very interesting. Apart from hybridising creating new gene combinations, what happened in Puerto Rica illustrates very rapid evolution by natural selection.
Where past hybridisation gives nature variation to work on, relatively small but significant changes can be very speedy.

The most convincing explanation is that the wild  bees  descended on this very heavily populated island where selection pressures were huge as the bees were so feared and mercilessly hunted. Only quiet ones survived to produce fertile queens.

Hybridisation is not the only means that genes cross over


It is called horizontal transfer, where genes have wandered from the the much vaunted traditional ‘straight line’ from the first ancestor. Hybridisation and attendant introgression are the obvious cases but in primitive ‘pre-sexual’ organisms swopping genes such as antibiotic resistance is far too common.

A recent New Scientist carried details of natural transgenic plants. It claims that at least 5% of the world’s plants carry transgenic genes that have been transferred by the bacteria agrobacterium. (It does this for its own nefarious purposes and the means is fundamental to the development of CRISPR that we will not discuss here)

It is ironic that this research comes from St Petersburg university. As I observed in an earlier post on hybridisation the Russians were past masters in utilising hybridisation in early plant breeding. That’s before their pioneering genetics research was trashed for half a century by Lysenko.
The recent Russian research suggest that bacterial transfer might be a route to the development of new species.
The New Scientist article also refers to gene transfer by virus.

I was astonished at the statement in the same article that the intimate cell connections induced in plants by common grafting has been transferring genes for millennia.
That goes against everything I have been taught in my lifetime.
I am yet to be persuaded.
Interesting that the Russians claimed transfer of  information by grafting more than a century ago

My 2015 article on hybridisation which refers to Vavilov the great Russian geneticist.