The remarkable role of viruses in a new look at Evolution

Evolution is much more complicated than we once thought. Since the human genome was mapped it brought up all kinds of surprises and raised questions that had never been posed. Twenty years of intense investigation of the source and the action of genes just scrapes the barrel of new facts that are emerging.

My post today has been influenced by the book Virolution written by Frank Ryan. He is a no fly by night crank, he is an eminent research doctor at the peak of his profession. He is a world expert on research into disease and is on personal terms with all the great names at the forefront of genomic research. He lectures to eminent conferences and discusses his ideas with all the worldwide experts in this intensely researched field.
A surprising number of genomic researchers have discovered the most amazing things about genes and yet have not pieced together their evolutionary significance. Many are still steeped in the incorrect school biology that evolution involves merely natural selection, variability created by mutation and that all new species develop by slow steps in a straight line.
His audiences warm to his interpretations and rapidly accept how their study and observations of our own genome are readily explained by a wider perspective and in particular the horizontal transfer of genes. Once thought to follow the rigid straight line of reproduction in family trees we now know genes are intensively mobile and even cross over from hugely different life forms.
The cover of Frank’s book describes it as the most important book about evolution since Richard Dawkin’s ’Selfish gene’.
To pick out a few tasty facts our own genome contains only 1.5% genes of vertebrate origin and at the very least 10% of our genome is of viral origin. Facts that emerge every day suggest that latter figure might be very much more.
Only today I read that a new virus had been discovered where none of its genes were previously known.
You might guess that viruses are a very big part of my story today.

Disclaimer
I would like to emphasise that none of my statements challenge that all life has evolved from primitive origins and the fact of evolution is undisputed (other than by the 50% of the world population who are misguided deniers). It’s just that now we have so much more knowledge than that which was available to my all time hero Charles Darwin.
A further admission is that The book Virolution although readily readable to the lay reader contains much technical information beyond my own ability or patience to completely absorb. I apologise if some of my ‘facts’ are not completely precise and others have become outdated before you read this. My aim is to indicate the direction of travel in new evolutionary thinking.

Hybridisation
Regular readers will know my obsession with the huge significance of hybridisation as an evolutionary force in genes crossing over and its role in deriving new species. It is astounding the sea change over the last few years in its general acceptance as integral in the evolution of both animals and plants. Frank Ryan presents it as a ‘given’ accepted by most ‘coal face’ geneticists that it has been immensely significant over the billions of years of evolution.
The beauty of hybridisation is that it brings together thousands of new combinations of genes in a few generations. Most genes have multiple functions and many find new ones when hybrids occur. The phenomenon of polyploidly where gene combinations double or more, is often associated with fertility of hybrids and this process gives evolution much more to ‘work on’.
Polyploidy is of course not unique to hybrids and genome studies suggest that two ploidy events have occurred in the millions of years of vertebrate evolution.
New realisations about viruses as an evolutionary force
To some of us it comes with horror that much of our own substance  is of viral origin and our integration has occurred throughout all of evolutionary time.

First a few facts about viruses.
They occur everywhere and have existed longer than normal DNA/RNA evolution. Ever since the first molecules were able to replicate they have been there - but always dependant on a host to complete their life cycle.
It has often been debated whether they should be classed as living. With a few tweaks on what defines life they certainly are and indeed the most numerous and successful forms of life ever!
They evolve far faster than life as we know it, most of their genes are new or unknown to science and have amazing properties and can perform functions which normal genes cannot. No wonder evolution has teamed up to exploit this remarkable source of variation.
Viruses achieve their reproduction by manipulating their hosts genetic machinery Being so small there is no part of the genome unreachable to them. Some readily share snippets of genetic code routinely, some have formed associations in the germ line as rare past evolutionary unions. To be honest I am out of my depth with all the possibilities of how virus genomes have teamed up with our own to achieve symbiogenesis and be as one with the original hosts

Symbiosis where things associate together to mutual advantage is not new to evolutionary science. It is accepted that chlorplasts in all plants originally came from a ‘captured’ algae and that our energy processing mitochondria were of bacterial origin. New thinking is that symbiosis has been a powerful evolutionary force not only in relationships between living organisms such as when fungus  and algae join forces to make up lichens but also in almost all aspects of our genetic inheritance. It comes as a shock that at molecular level the most common symbioses are between genome and virus!

How do viruses form symbioses with their hosts
Many ways are yet to be discovered but all start with the virus exploiting the host genome to complete its own life cycle.
My first examples is not very pleasant. Viruses start out as invading pathogens to a living organism. Sometimes they occur as a plague that wipe out almost complete populations of their host. Of course if they are too successful they wipe themselves out too and their is no evolutionary continuation!
Take myxomatosis in rabbits as an example. The introduction of this virus wiped out almost but not all Australian rabbits. It was potentially good for those rabbits that survived - no competition. It was good for the virus because it had found a host with which it could co-exist and thrive and sustain itself. Most symbioses start that way and when each element adds to a partnership and natural selection follows. It’s all pure darwinian natural selection at molecular level. After aeons of time the original host might gain more than its original pathogen


An example close to home is that of the grey and red squirrel in The UK. The grey squirrel carries a virus that is to the grey squirrel  harmless (and I only guess that it might make some symbiotic contribution). The same virus is lethal to the red squirrel and this is why in this country the grey quarrel is totally dominant.
Another little story from Frank’s book.
Because viruses have so many unique genetic properties and mutate fast they make rich partners in some of the very most sophisticated biological processes. The evolution all the placentas in those mammals that possess one has involved different but related viruses. Apparently their ability to form complex cellular membranes is a property unique to viruses and from traditional host vertebrate cells most unlikely to arise from the accumulated mutations of old evolutionary theory.
The genome itself clearly maps out to researchers how viruses were an essential part of the process

…and I dare not start on the consequences of viruses ability to jump from one chromosome to another …. and as already implied jump from one organism to another, archea to bacteria or even animal to plant

Epigenetics
The only new thinking that does not involve permanent changes to the germ line is epigenetics. Epigenetics is about switching genes on or off to enable specific functions. All living cells carry a full compliment of all the genes in a genome and now we understand more how they are switched on or off. Such activation is easily appreciated when you consider the ever changing differentiation as an embryo develops.
It is now known that epigenetic switches can be passed on from generation to generation - but don’t last ‘for ever’
When our own genome was first recorded scientists were astounded that only twenty thousand genes or so contained our genetic code. Much DNA was recorded as ‘junk with no essential function.This is now less clear and in many or most cases is wrong. Our viral inheritance is apparently closely involved with the evolution of all the above processes.

Absence of posts
Regular readers will have noticed an absence of posts recently and will know that I have been on medication for acute anxiety brought on by destruction of half my garden by flood. I am not yet back functioning on all four cylinders but am on the mend and will tentatively start posting again.The good news is that the number of readers continues at its highest level ever! 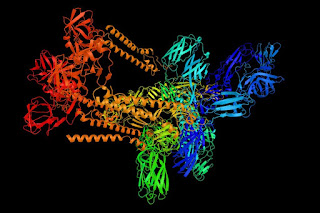