This post contains Yorkshire dialect and ends in a rude rhyme

A  hundred years ago Yorkshire was the European centre of rhubarb production. Not only did huge quantities go by train, the rhubarb express, to Covent garden, further supplies went on to Paris. In a thirty square mile triangle between Leeds, Bradford and Wakefield early last century, there were 200 producers. After the war the industry fell into severe decline. Now on a much smaller scale, production has revived. Rhubarb is again fashionable. Wakefield has an annual rhubarb festival  in February and the industry is now a tourist attraction. Yorkshire rhubarb is ‘forced’ in heated completely dark sheds. It was traditionally picked by candlelight and you could hear the plants grow as the buds burst. We used to take the students on an annual visit. We also would go to Cawood experimental station where director Frank Smith built up a huge collection of traditional varieties. Many varieties had debilitating virus which were ‘cleaned up’ by modern specialist techniques. The national collection now resides at RHS Harlow Carr garden. The now smaller rhubarb triangle is said to be between Wakefield, Morley and Rothwell. 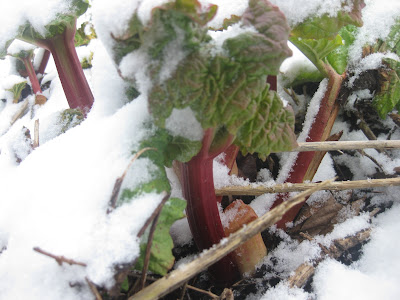 In some parts of the world rhubarb grows all year round but in temperate climates like our own, it has a winter dormancy and needs to accumulate cold before growth will restart in Spring. The rhubarb triangle is in a huge frost pocket  between the Pennine hills and  provides suitable chilly conditions! It is suggested that in the  past, pollution in this industrial area, caused leaves to be shed early in Autumn and get the process of satisfying  the cold requirement off to a quick start. Modern growers  keep an accurate record  of temperatures and when a specific number of ‘day degrees’ of cold are accumulated, they know the rhubarb can be forced in the sheds. Timperley Early, the variety I grow myself, is an example of an excellent rhubarb with a low cold requirement.
Apart from the cold, other aspects of history and geography made the triangle eminently suitable for rhubarb.

'Ear all, see all, say nowt;
Eyt all, sup all, pay nowt;
And if ivver tha does owt fer nowt-
allus do it fer thissen
(Grow your own rhubarb)

Rhubarb is a rewarding vegetable to grow at home. Because it is so easy many gardeners do not give it the treatment it deserves. Plant it in full sunshine and feed it. It benefits from a generous late winter top dressing of growmore, or better, Yara mila complex or similar balanced fertilizer. If you mulch rhubarb with plenty of farmyard manure or compost it will really thrive. Many gardeners like myself do not force it but choose to pull rhubarb sticks right through the spring and summer.
New gardeners sometime do not realise that when you remove the leaves from a plant  you weaken it. This is inevitable with rhubarb as you eat the petiole (the leaf stalk). New plants need a year or two without cropping to get started and even with an established plant, too many pies and crumbles is not a good idea. As a completely unscientific guide, my own clump in full foliage covers slightly more than a square meter and typically I might pull  ten stalks on about eight occasions  a year! If I actually liked rhubarb I might get away with a little more! I don’t strip the plant and do not take more than 25% of the petioles at a single picking. One final tip. Do not waste your time growing it from seed and never plant rhubarb from a dubious source. If a friend offers you stock from a moribund plant, refuse, it’s probably virused.

“Your rhubarb, I’ve noticed grows
By the outhouse where everyone goes!”
Grandad said, “Lad,
It isn’t so bad..
They’re family! Just people we knows!”