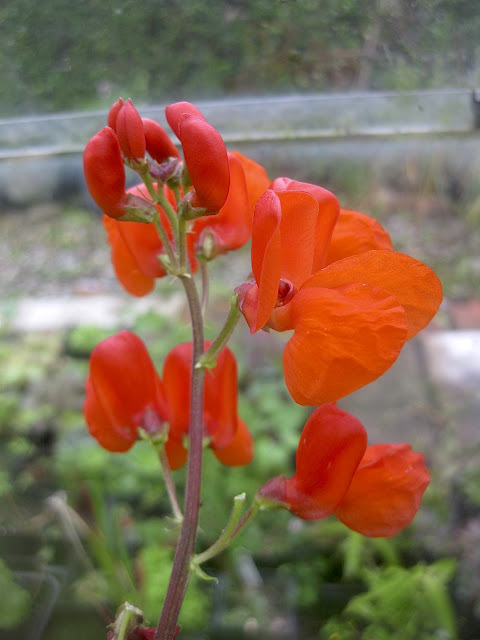 In the old days climbing french beans, variety ‘Blue Lake’ were a very fine commercial greenhouse crop for early beans. For no very good reason I have never tried them in my own unheated greenhouse. Silly really, as we both prefer french beans to runner beans and we could have had fresh beans for an extra month.
It has always been my understanding that cross pollinated runner beans were unsuitable for the greenhouse because, unlike self pollinated french beans, without insect pollinators ‘runners’ produce no beans!
Even outside, pollination of runner beans can be a problem. Early crops might lack pollinators and some bumblebees cheat and go direct for the nectar through the back of the flower and do not transfer pollen. Worse, in a dry summer pollination sometimes fails.

I was intrigued when Marshalls introduced beans resulting from hybridisation between runners and french. I took it into my head that it might be a good idea to try part of my packet of the new variety, self fertile ‘Firestorm’ in my unheated greenhouse for some early beans! I could spare a little space through June and July before my tomatoes grew high! I would grow them in the north west corner of my greenhouse where they would cause little shade.

At the beginning of May I sowed six seeds in each of three large (15 litre) pots. My sandy soil is particularly suitable for large pots - I frequently use it rather than potting compost - and as the level of fertile soil in my tomato bed was a little high I just scooped up some soil, mixed in a tiny amount of Yara Mila Complex fertilizer and filled the pot. I would later top dress with the same fertilizer as I do not liquid feed. It is very important to note that seed and young seedlings are very sensitive to direct contact with strong fertilizer and this must be avoided at all costs. My seeds were sown at the top of the pot in a thick layer of unfertilized soil.

I am pleased to report the beans grew rapidly without any check to make fine plants. They threatened to take over the greenhouse as they found struts of the greenhouse to supplement their seven foot canes!
The only critical part of their management is to recognise that as the plant’s leaf area becomes large, huge amounts of water are required, especially on sunny days. For the latter few weeks I have been thoroughly watering at least once a day.

Lessons learned
Much to our eating satisfaction we now have a heavy crop of delicious runner beans. What has my ‘experiment’ proved? Nothing, but I have learnt a few interesting things.
Although my crop will be very little in advance of outdoor runner beans in the balmy south, here in the north I have gained beans for perhaps an extra month. Next year I might just try sowing a little earlier. I might try a few tricks like watering in the seed with warm water, ‘free’ from our solar generator! Bean seeds are very liable to rot away if the soil is cold.

Although Firestorm is a fine variety it is in practice a runner bean and not a french bean. I do not dispute that its genetic inheritance of self fertility has been ‘bred in’  from french beans.

My ‘trial’ completely failed to demonstrate the afore mentioned self fertility! My greenhouse ventilators and door are always completely open from June. The bumble bees thought my greenhouse was a wonderful warm place to collect their nectar the proper way and pollinate, I am pretty sure if I had grown a standard runner bean variety I would have had just as many beans.

Next year I think I might sow some beans direct in my greenhouse soil rather than pots, I will not need to water quite so often, The plants will need the same total amount of water but in less frequent doses.

But should I grow a  true climbing french bean next year. I recall blogger Mark Willis recommended a good one…

Just one more observation. My runner bean pots are standing on soil. By mid-June they were starting to root through into the ground - rather like old fashioned ring culture of tomatoes. I am sure that the extra zone of watered soil made my watering so much more effective. And those extra vigorous fibrous roots would improve my soil, perhaps the roots would support nitrogen fixing bacteria…..

Three days ago I was at last completely confident there would be plenty of beans. It’s beans tonight and for the rest of the month!

I filed this post in some haste before everyone got sick of their own outdoor runner beans! Things did not go quite as expected. I did have a few reservations whether my newly set pods would actually grow. I need not have worried they gave me a huge quantity of beans. They came in a glut! I am left wondering whether it was wholly because of the extraordinarily hot July or because of their superbly efficient self pollination, not to mention my busy bees. It will be interesting to see if there is much continuity of supply with the Firestorm I am growing outside.
Unfortunately I am having a little trouble with my culinary chef. As mentioned Brenda is not particularly fond of runner beans and has not been preparing menus that involve them. We have only eaten runner beans three times! (She does not also seem to consider that my summer cabbage is suitable for summer either!). Her reluctance has been to the benefit of friends and relations who have proclaimed them  tender and delicious. I estimate that my total yield has been 40 generous person-portions.
To the relief of my now cropping  tomatoes the three pots of beans have now been completely removed and their tops are mulching my vegetable garden where they are rapidly being covered by my extending butternut squashes. I hate to waste organic matter.
Interestingly when I dragged out the pots from the greenhouse there was much less rooting through than I had expected. My outdoor french beans are just starting to crop. We have visitors tomorrow and they are on the menu.

My previous posts on vegetables