I have honey fungus in my garden and am unconcerned 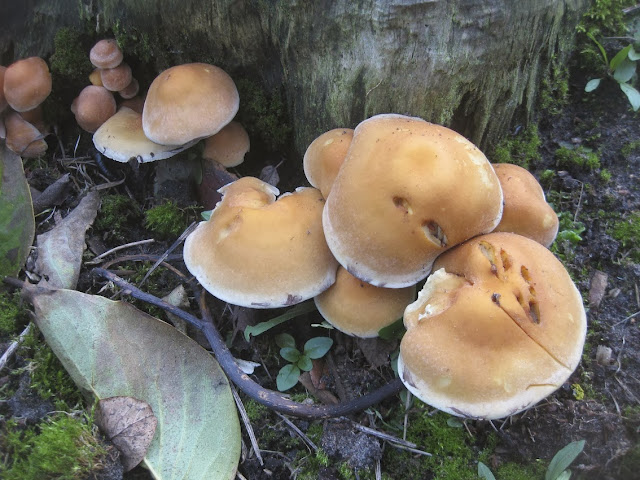 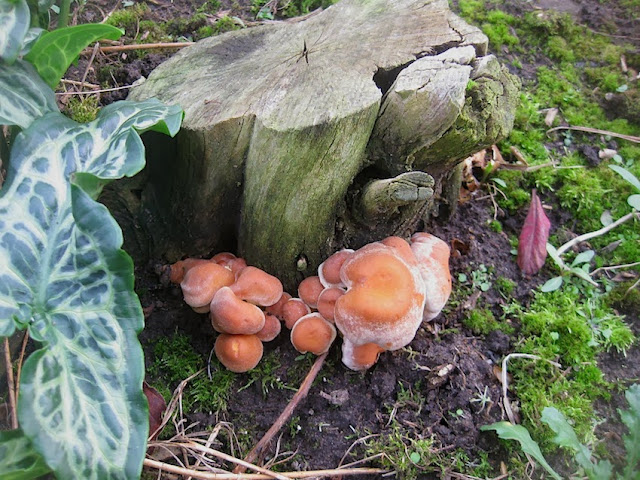 Armillaria mellea, Honey fungus, bootlace fungus. These three names describe the fungus that bring a shudder of fear to most gardeners. To read the gardening press honey fungus is the kiss of death to a garden! The story goes that black rootlike, shoelace-like, fungus strands invade the whole garden from dead tree stumps roots as they spread to new hosts. It is true, it does spread that way as it insinuates it’s way through the soil. But I consider that in most gardens armillaria does very little harm.
There are some significant exceptions and many gardeners will say I am very complacent! 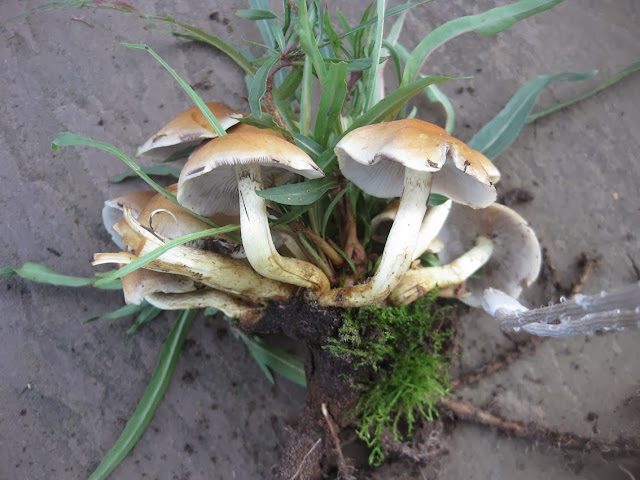 I am grateful to former student and landscape designer Davy Blakemore who spotted  fungus fructifications on the stump of a dead tree in my garden. I was lifting some plants for him and we found this fantastic example of a seemingly strangulated oenothera garlanded with a beautiful necklace of the toadstool spore-fruiting body. I could sense Davy draw his breath and noticed the look of fear in his eyes. Dare he refuse the plants that his former tutor was giving him? Clearly he had not attended my lectures!

I was thrilled to find this rare example of a plant in the process of being invaded. The next morning I rushed down the road to show it to plant biologist Peter Williams. Like a good scientist he suggested we wash it to examine it more clearly, and then to dissect it. He immediately set to work with his scalpel. Anticipating the likely controversial line in my blog I casually observed that the infected oenothera looked healthy and vigorous. Could it be that rather than being a harmful fungus invasion, that it was a developing mycorrhizal association? Peter is an expert on mycorrhiza and quickly dismissed my suggestion  He is too nice to be rude and after consideration explained why this was a rather silly idea. 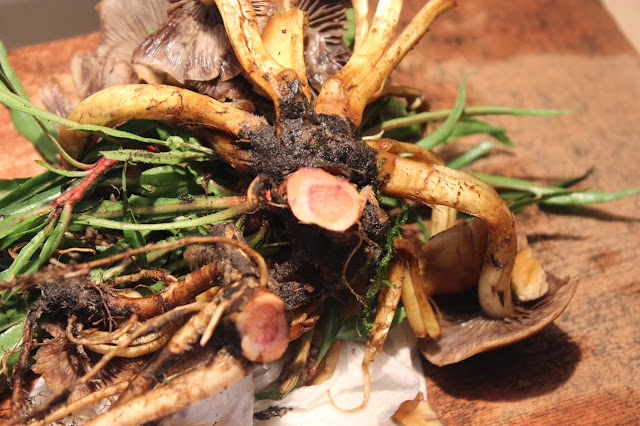 Forty five years ago when we moved into our new house in Bolton Percy we called our home Betula and planted a Young’s Weeping Birch! The house adjacent was called Corylus. Much subtler as the family name was Hazel! The house across the narrow country lane was called Ashdown. The relevant ash was in my new garden, it had been cut back to a huge five foot bore stump. It was the start of my lifetime experience of cutting down trees as close to the ground as one could go without damaging a chainsaw, but not wasting energy digging  them out or hiring a stump grinder. I resolved to make the stump an attractive garden feature by covering it with clematis and other scrambling plants. I suppose it was the  start of my mingle-mangling! I feared the stump might eventually get honey fungus.
And sure enough after five years I saw the first fructifications on the tree stump and very soon later armillaria toadstools appeared in my lawn. Not being confident of my identification - I still fear to eat a wild common mushroom - I took it to college. My botanist friend Mike Ashford walked into my office, declared “nothing wrong with that” and took it home and ate it. Apparently armillaria fructifications taste quite delicious.
An so the saga started. Bootlaces threaded everywhere. I was already a no dig gardener and rarely encountered the fungal rhizomorphs but they were to be discovered up to forty yards away from the stump. When Tim and Ben were toddlers we took up our plastic lined pond and converted to a more childproof bog garden. The underside of the plastic was covered with a beautiful matrix of grasping fingers. They looked rather like the tentacles of a Doctor Who monster clawing to emerge from a subterranean grave!

The point of my story is that in the next twenty years I never lost a plant. I did joke that perhaps I lost a flag iris and having seen the top picture I can now envisage it’s demise! I rationalized my experience by concluding that plant death is often a syndrome; a combination of susceptible plant species, plant age, soil conditions - especially  drought and poor drainage - and the actual pathogen. Further research - we could not google then - suggested that there might be more virulent strains.

Case study 2. No plant harmed by the fungus, killed by a bureaucrat’s pen.
Chestnut avenue was a beautiful track lined by sixty magnificent old trees. A new road was to be constructed in our village of Bolton Percy.There were two alternative routes.The crux of the affair and close to the heart of the whole village community, was whether Chestnut Avenue was to be widened with the necessary demise of the trees. It was due to go to court where the result would be decided in a typical British way.
One hired ‘expert’ found strands of armillaria. The trees were doomed! Such is the reputation of honey fungus, the case never came forward and the trees were felled. Dammit, where-ever there are old trees there will be signs of armillaria. Old trees and armillaria go together like chalk and cheese. The fungus was doing no significant harm. The trees were good for another sixty years. What a shame.

Case study 3. Very real damage
We were on a student tour and visited a famous parkland in Cheshire. It had a very fine grove of ancient one hundred year old rhododendrons. The whole avenue was gradually dying, killed by armillaria. The manager was beside himself. He cursed and feared armillaria with very good reason.
Some plants such as rhododendron, lilac and privet are particularly susceptible to honey fungus when they are very old. Honey fungus will gain some kind of ascendency over the years when soil conditions are bad. Often poor drainage will create bad aeration and root death. Dead roots and woody organic material sustain the fungus and the death of deep roots  make the effects of periods of drought more severe. It’s wet enough in Cheshire at the best of times and some of their soils are heavy. It had been a particularly wet season. Who knows it might have been a particularly virulent fungus strain?
I would argue that it is rare and very real events such as this one that gives rise to the fearsome reputation of this normally ubiquitous and often insignificant fungus.

Case study 4. A new on-going case
So my old friend has returned at the top of my new garden. It must have been with me unnoticed for a few years now, growing from the stumps of any of a dozen cut back trees. All my plants in the infected part of my garden (bar one) are healthy. I have also discovered black fungus rhizomorphs next door in Cathi’s garden where I am in the process of replanting. Sorry Cathi I have not yet broken the alarming news to you that your soil is a seething mass of black bootlaces but I assure you that you have  nothing to fear.

Hot off the press, now that I am suddenly recognizant of this invader I have noticed another dead stump emitting the characteristic melliferous smell at the bottom of my garden!
Now I have found armillaria invading my garden I must look again at a rather tired looking old lilac, a known susceptible genus. For some years now I have pondered it’s removal. Perhaps I should start to panic, another susceptible species, an old flowering cherry is just a few boot steps away!  It is extremely healthy. Over the last twelve years I have established about seventy  different uncommon trees in my garden. Can I be certain that in another ten years they will  still be there?

Am I being too complacent?

No, not in my own garden, but yes in terms of being a worldwide problem. I would have liked to merely report that armillaria is a force for good in nature’s carbon cycle and a desirable mycorrhizal host for certain wild orchids and other rare plants. Unfortunately I cannot deny in certain sectors of forestry and orchard production it is a significant scurge. You can see on the net sections of hillsides where hundreds of tree have been killed by this fungus. Large financial resources have been invested in investigating it’s control. Some areas of land are infected with huge bio-masses of infective fungal rhizomorphs. In some cases they are hundreds or even thousands of years old, repeatedly refreshed by new generations of trees. Some of these biomasses are genetically identical, in effect a huge monster.

Armillaria mellea and it’s many relatives - there are at least seven British species, not to mention individual strains - can be a real problem.
It’s just that I want to suggest the world is a very big place and that there are millions of acres including your own garden, where the fungus  will be present and need not be a cause for concern.