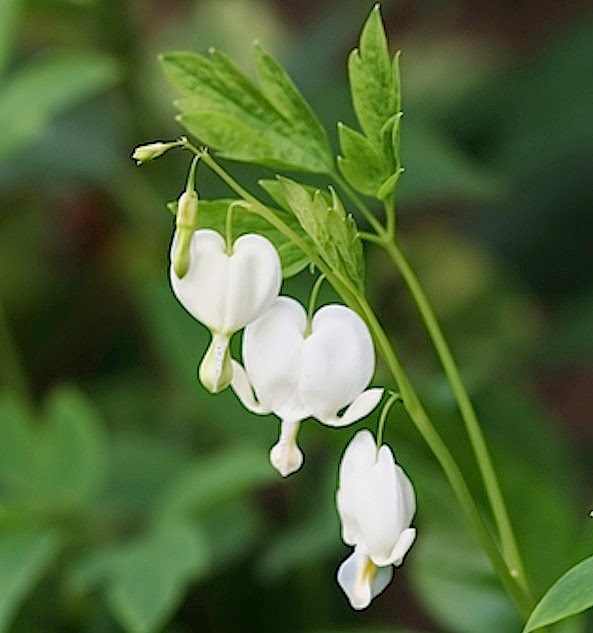 My first dicentra, the one that adorns the wall of this blog, is not a dicentra anymore! Its called Lamprocapnos spectabilis. What an ugly name for a beautiful plant. It’s those damned botanists again! I refuse to use that horrible word again today!
The highest horticultural authority in the land describe it as a rhizomatous perennial but its subterranean structure looks like a root to me! They also say that it can be propagated by root cuttings. They seem to want it both ways!
Whatever the world calls those underground structures they have never rooted for me! I used to examine for a national horticultural examination and in a question on root cuttings I was universally told  by the unfortunate students that Dicentra spectabilis could be propagated by chopping up roots. How could I mark them wrong when all the books sing to the same tune!

Root cuttings have two important characteristics. One is that they should be roots! The so called root cuttings of that other popular dicentra, Dicentra formosa are not roots, they are underground stems  called rhizomes. ‘Common knowledge’  dumbly repeated  by all the media says that this dicentra is propagated by root cuttings! Don’t get me wrong pulling the couch-grass-like  rhizomes apart in early spring is a wonderful way to propagate Dicentra formosa. I used to divide hundreds in February and March directly into small pots to sell on my Open days as lovely plants which would be in full flower a month or so later!

The second characteristic of root cuttings is that they can initiate new buds on the cut pieces. Roots on the majority of plants do not have buds on their surface and are generally unable to generate  new ones. A few plants do have this special ability as you may very well know to your cost in the case of dandelions.
Dicentra spectabilis roots (as I claim them to be) do not have this much vaunted ability  to make new buds on cut pieces. The fanged roots certainly have terminal buds and subsequently shoots at their apex and as long as you take a piece with at least one bud it will grow. This is the normal way it is propagated, it’s an example division!  They are NOT root cuttings.
I have tried getting cut pieces of  spectabilis root taken without their natural terminal bud to grow many times. I always fail!

An interesting analogy to the roots of Dicentra spectabilis are the root tubers of dahlias. If dahlia tubers are to successfully grow they must also have their terminal buds and you cannot chop them up like the stem tuber of a potato.

My own Dicentra spectabilis
You might expect someone who holds the National Dicentra collection to have fabulous plants. You would be wrong and although they are very easy to grow and my own are adequate, survive and look lovely, they are not as good as the best I have seen. The most magnificent I know have been in Belgium and France. Our maritime climate here in the North of England is so cruel. We get warm periods when new growth bourgeons and after a few weeks of benign conditions suddenly we get a series of sharp frosts. My bleeding heart is broken every year! Some of the varieties such as Dicentra spectabilis alba and the cultivar ‘Gold Heart’ are particularly sensitive to sudden cold. Even if I escape frost damage, cold dry biting winds are a problem. It is very important to position plants so that as far as possible they avoid such constant checks. In those climates where severe Winter cold stops and Spring follows without changing it’s mind, Dicentra spectabilis thrives!

Cultivation
Despite the above proviso about wind and late frosts, Dicentra spectabilis is very hardy and tolerates a wide range of soils. It prefers deep well drained moist soils but is surprisingly tolerant to inferior drainage. It thrives in quite heavy shade but will also grow in full sun providing their is ample moisture. The best places are protected from wind and in light shade for a part of the day. If your dicentra thrives do not faff around lifting and dividing it every few years like the books say. I had one in Bolton Percy in the same place without any disturbance for about twenty years.
I have sometimes bought new plants for clients at the Garden Centre and they usually survive but I don’t guarantee it. Plants raised in soft conditions can succumb to all manner of ills.

The basic form from seed is the true breeding species D.spectabilis. When raised from seed I cannot discern any appreciable variation between plants. It is the first dicentra I owned.

Dicentra spectabilis ‘Gold Heart’ has on a good day lovely golden foliage. On a poor day if you are feeling a little jaundiced, it is rather insipid and somewhat chlorotic. It’s rather a matter of opinion. It seems unbelievable now but I bought mine at Homebase when I was participating in a staff training programme  twenty years ago.The garden centre supervisor told me that it was so chlorotic, she thought - probably correctly - that it had iron deficiency and had considered sending it back. I could not believe that I increased my National Collection at Homebase! 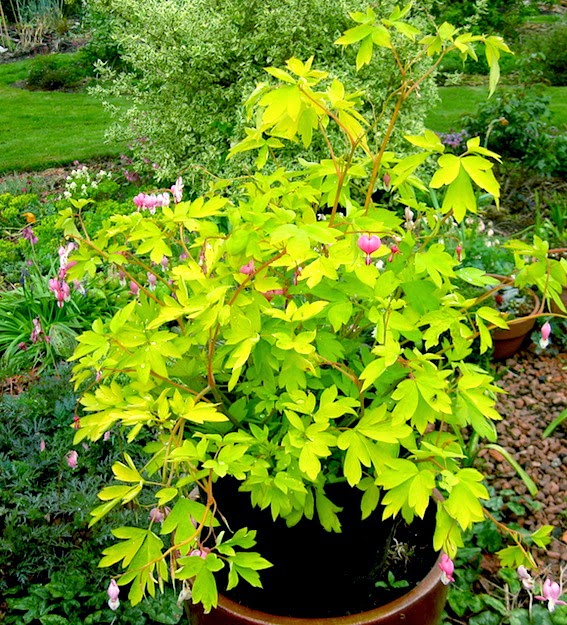 I was intrigued four years ago to see a new dicentra, Dicentra spectabilis ‘Valentine’ in Parker’s wholesale catalogue. I just had to buy some. As is their fashion as a bulb suppler they sell it as dry roots, (wrongly called rhizomes elsewhere).  When my plants arrived I was amazed and surprised by the quality of the sturdy roots and the strong  terminal buds. I potted them up and even in their first year they made made very fine plants. ‘Valentine’ with its sound reliable constitution and beautiful colours is now my favourite.

Propagation
As already mentioned spectabilis and spectabilis alba come true from seed. As is often the case with hardy perennials it is best to collect your own seed. I usually sow mine in January in my unheated greenhouse. I am not quite certain whether it has a cold requirement, but cold certainly does not do the seed any harm!

All the forms of Dicentra spectabilis are best and most easily propagated vegetatively by division. If you want maximum numbers from your plant tease the fanged roots apart and pot-up each one individually. If you are really confident you can sever the root fangs vertically and providing each has a terminal bud they will potentially grow. It’s not completely essential, but you will have most success if you can give them early protection in a cold greenhouse or frame.

By far the easiest way to propagate is to divide clumps with a sharp spade when you can see young shoots clearly emerging. Avoid slicing the shoots, but basically take a spadeful and replant direct in the ground elsewhere.

In the past I have successfully rooted stem cuttings of Dicentra spectabilis. The shoots take quite a long time to root and if propagated late the natural late summer dieback comes before they are strong enough to survive. Unless you have a nurseryman’s precision I don’t recommend this method.

Ways to grow D.spectabilis
The ideal way is as a specimen plant with plenty of space to itself in a slightly shaded, sheltered, well drained, moist woodland glade. There is a place in most gardens where similar conditions can be simulated, perhaps near a fence in a more shaded part of the garden but not too near vigorous trees or a leyland hedge with their severe dehydrating roots.
As you will see from the pictures I grow some in large tubs. Although I can ensure my tubs are sheltered from severe biting winds and maintain my collection by overwintering in the cold greenhouse it is not necessarily the best way to grow them. They will only be worth displaying for three or four months. The benefit of the winter greenhouse is that the dormant roots can be kept fairly dry. I have lost  pot grown dicentras in pots when the drainage has been suspect during periods of heavy rain.

The achilles heal of Dicentra spectabilis is it dies down very early, frequently before the end of August. Woe betide any foolish ‘digger-overer' who forgets they are there! I have recently been trying to exploit this early dieback characteristic by sharing space with other plants that grow at different times in the year.
My summer herbaceous borders are six or seven foot high by late July but are generally very bare until mid June and even then there  is not a complete canopy of shade for a few more weeks. I have taken to mass planting spectabilis over these borders for Spring interest. It seems to be working.
Later in the Summer they will be overgrown by the tall perennials but will have built up enough strength to do well next year.

Another example of sharing is amongst my coloured stemmed shrubs that I cut down in Spring to stimulate strong shoots for winter interest. I have permanently interplanted the dicentra with my cornus whose stems provide a little welcome Spring shelter before being cut to the ground in the first week in May. The dicentra then have space to themselves until the new dogwood canopy thickens.

Quaint naming
The commonest common name for Dicentra spectabilis is ‘Bleeding Heart’. Much nicer is ‘Lady in a Bath’ and if you turn an individual flower upside down you can see why. I see a rather pulchritude Victorian lady standing in her tin bath by the fire! Perhaps I have a rather fevered imagination.

Early in the days of holding the National Collection, I thought I had found a new variety in a Dutch catalogue. It was called ‘Coeur de Marie’. I subsequently found that this was the french common name.