Ichtyoselmis macrantha but it once was a dicentra!

You might prefer to call it Chinese Bleeding Heart

….or even Chinese Goldfish Plant or the Chinese Fishtail Plant

The original collector in Hupeh in China noted that it was found in a very dark wood! If you have a very dark wood with deep black organic summer-moist soil you might like to try it! If your garden is like mine it might be very difficult to grow. As the holder of the National Dicentra Collection I am obliged to at least try and against all odds and by the skin of my teeth have managed to keep it for the last thirty years. First in Bolton Percy on a pH 7 neutral soil and now at  Seaton Ross at pH 6.5.
In both cases it has been in heavy shade under a tree. Unfortunately the constant moisture it craves can be in short supply under a tree in our low rainfall area. 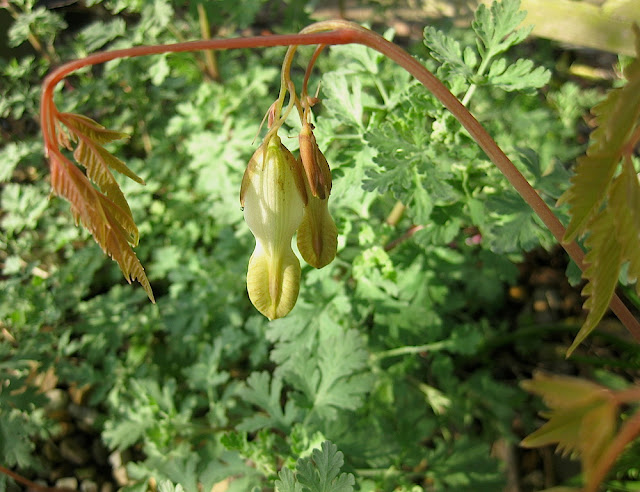 Every year my heart bleeds when cold dehydrating winds tear the fresh soft yellow  gorgeous green growth on my dicentra. It is extremely important that young leaves are protected. I have given them my most appropriate site but they always  suffer and never achieve their potential delicate 45cm high. They only dane to flower at all if the previous season was kind.
There is something about woods and companion plants that ichtyoselmis craves. You will see from my pictures that mine has ‘run’ with its probing long rhizomes as much as ten feet in and among other woodland plants. It has taken fifteen years and the shoots are very sparse.
It might be wind protection, perhaps woodland mycorrhiza or merely the presence of nurse plants that it needs. I don’t know. I note in pictures of one of its woodland habitats in Sichuan that like my own plant it enjoys companions in nature in dense forest shade.

On the plus side my fishy named plant is extremely hardy. It did not suffer at all in our 2010 Winter when temperatures were -20 centigrade for several weeks. In contrast a very sharp late frost might blacken soft new growth in May.
The soft growth on my ‘real’ Bleeding Hearts, Lamprocapnos  spectabilis - I still call them dicentras - gets caught by frost every year and this year my plants have really been badly checked by an ill timed -4 centigrade frost in late April. Lamprocapnos likes protection from wind and cold  too!

Dicentra macrantha - please indulge me namewise - is a very difficult plant. Most ads on the net prove to be ‘out of stock’. They are not easy to propagate unless timing of division is precise and you have resource to a greenhouse. Not like ordinary Dicentra formosa when in late Winter you just chuck a few rhizomes in a pot! They do set seed and as I write now in mid May I hope to take pictures next month to show you! With luck I might get a couple of pods and a dozen seeds. They might even germinate. I seem to remember my existing plant came from a rare seed sowing success. As a natural species  - they are not named cultivars - seedlings come true.

Do you know any places where Ichtyoselmis grows?

I remember I saw a remarkable huge clump in a woodland glade at Kew Garden thirty years ago. I doubt that it is there now. On my recent visit I failed to find it. In the right conditions it probably grows very well and might even be invasive. There must be several gardens on the warm wet UK west coast and in Ireland where they thrive. Please let me know if you have seen them. Best of all you might grow them yourself.

Can I find a better place for my plant?

Writing a post concentrates the mind! I now think there is a better place in my garden that was unavailable when I originally planted. It’s at the top of the garden next to Cathi’s fence and under the shade of an old cherry tree and near a young birch. It is protected on the windward side by shrub and bamboo planting and across the road is a wind proof high hedge. In a slight depression the site captures Summer moisture. Being sandy it’s very well drained in Winter! I think I will try it!
I hate to disturb my established plant. Perhaps those anticipated seeds will germinate to give me new plants? I think I will have to bite the bull and take the cherry by the horns. It will be a very deep spadeful of soil from under one of the dicentra tufts. I think it will be in September, it will be dormant by then.
Come to think of it at the other side of the fence it’s darker, more protected and moister. As most readers know I am Cathi’s gardener now. I have planted Dicentra spectabilis in this dark corner and it is really thriving. If the whats-its-name’s rhizomes spread under the fence they will be ideal companions. Perhaps by then I will  be in the ground too.

Please excuse my mischief if I suggest that if you are a digger-overer of borders there is no point in growing Dicentra macrantha. My established plant is not growing where it was originally placed. Those wandering rhizomes do not like spades!
On second thoughts there may be places in Ireland where a chop with a spade is the best way of propagation!

Update even before first publication!

After yet another windy dehydrating early June day of protecting my flowering ichtyoselmis with folded garden chairs to get my pictures something snapped. No not the delicate shoots - it was me!

I decided to lift and divide part of my plant. I would sacrifice a small clump! As mentioned the plant has weakly dispersed itself around and forking out a portion would not disturb the section that was flowering. I tried as far as possible to keep the long rhizomes attached to the soil. With varying success I managed to get a few small clumps. Some portions collapsed to loosen and reveal the long thin naked rhizomes. I potted them all into my favourite compost. I got six pots of propagules.
The pots were  immediately placed after heavy watering under my slatted greenhouse bench - it gives about 75% shade.
Now on 21st of June I am pleased to report that they are thriving and are making some strong new shoots.
I think Cathi is going to get her new plant ten years earlier than expected!

On reflection my plan to divide them when dormant in September was perhaps flawed. I might have not even been able to find them! In addition the fact that my sandy soil tends to collapse away might have excessively disturbed the dormant rhizomes.

Yesterday I collected some seeds

Despite the horrible weather the flowers got pollinated. I caught a glimpse of a bumble bee as she flew by. The brave worker must have later returned for some nectar. I took just one pod on the longest day of the year. It was just six weeks after flowers had appeared. They are not quite ready but I have sowed them anyway. If they germinate it will be probably in Spring. Some seeds such as certain primulas germinate straight away if still ‘green’. Who knows my dicentra might surprise me but it is very unlikely.
I love those little white elaiosomes on the shiny black seeds. Common to most dicentra they attract ants who collect the seeds and disperse them. I love too the term myrmecochory that describes this phenomenon when a seed contains a tiny package of food to entice and reward the ant for this service.
I don’t want the ants to pinch future viable seed and will watch my remaining pods carefully until they are ripe.

I have written before about myrmecochory


Yet another update in mid November

My fish are swimming

Rick was right and seemingly unseasonal division has worked very well indeed. When I knocked out my not yet dormant plants I was amazed to see beautiful strong rhizomes. To my fevered mind they looked like a swarm of fishes all swimming in the same direction!  I know that the fishy name icthyo… alludes to the fishy shaped flowers but I am now beginning to wonder…

My five plants are now planted. (I don’t know about the sixth, perhaps I miscounted?). The strongest is on the site previously pictured and another is on the even darker side of the fence in Cathi’s garden. On the other side of Cathi’s house the west facing wall makes a sheltered corner with her hedge and a plant has gone in there too.
A plant has gone to Peter. He has a woodland garden. We work on the principle that if our original plant dies we can reclaim a propagule!
I have planted a strong plant in the soil under the greenhouse bench where my propagated plants have grown in their pots all Summer. This I now confidently predict will give me many further divisions in the future. I promised Rick a plant at the end of next year and if he comes to my Open Day in September he can claim it!

Last July I managed to collect a hundred seeds! A quarter have gone to Peter with a challenge! Half I sowed in a pot immediately as I normally do with dicentras. I do this in anticipation that they will usually stay dormant until Spring and that this stratification will best preserve them. Another quarter remain in a packet to be sown in my unheated greenhouse in January.
The picture shows a single seedling that emerged in September. At that time it was doomed and duly met its demise.

Apologies to those who have been enticed by my recent promotion of this update and have come expecting a fish!

The young plant that was planted in the soil under the bench in my unheated greenhouse has made an extremely sturdy plant that has given me lots of propagation material. Above it provided a second crop of flowers in August this year.
Still in his tunnel Peter's plant is thriving. My planting at the top of the garden is after a difficult start getting into its stride. Cathi's two plants died.