A team of volunteers is helping to resurrect Bolton Percy Churchyard to its former glory. 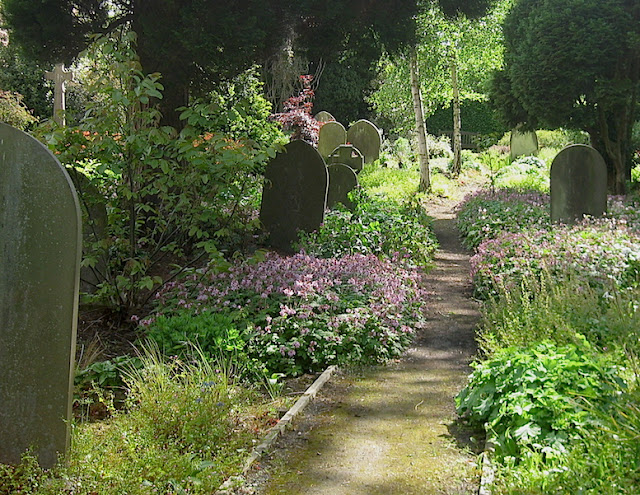 I have described how when I knocked on Rector Norman’s door and offered to spray off the weed in the overgrown churchyard how it changed my life. The world beat a path to the church door. Virtually all the blue-top national newspapers - over a period of fifteen years -  came to see the garden that nature had helped me to make. Glossy magazines came and  nine television programmes were filmed including  a piece for Gardener’s World.
A churchyard garden managed naturalistically with plants of the world was a novel thing thirty years past. At that time when I still lived in the village the garden was  developed and  maintained by me in two hours a week. Significantly this continued fifty two weeks of the year. It surprising what nature do can do with the help of frequent and regular guidance.

I moved from the village fifteen years ago. I revisit once a month to ‘do’ the churchyard. I am there for about three hours. It is not nearly enough and the standard has gradually declined. It is ten years since it has had any media coverage.

The village has become concerned that I might hand in my proverbial P45. If the cemetery had become even more scruffy then they might even have insisted. Worse I might pop my clogs and kick a rather rusty bucket. I have been looking a little peaky of late. I jest, Bolton Percy will have to put up with me for several years more.

Never-the-less I am hugely grateful that a new arrangement has been made . A team of volunteers have started to help. Four skilled enthusiastic gardeners have worked in the cemetery garden for four Monday evenings now. What a difference they have already made. If they continue in this vein in a year or so it will be transformed. I could not believe the improvements they have made. Jackie Giles tells me that they loved every minute of their labour. No mean gardener herself, she used to open her garden under our National Scheme. No doubt some of her collection of Barnhaven primroses will find their way down the road. The group includes some highly skilled pruners. I returned home yesterday on a ‘high’ hugely impressed.

I took some pictures and mischievously thought I might make some suggestions for the ‘C-team’. Bolton Percy Cemetery team.

Some thoughts and suggestions for the ‘C-team’

Put two problems together and make both go away.
There was a large white pile of overgrown builders rubble that years ago had been dumped in a corner. It needed shifting.
Meandering desire lines created by visitors in more popular days extend the viewing points as you walk through the churchyard. They are becoming overgrown.
To my pleasure and astonishment on my last visit the walks were reappearing. I wonder if we might need to find some more limestone hardcore?
I suggest that in life and as good management in business such skill is a rare secret.
Posted by Roger Brook - No Dig Gardener at 07:26