Naturalising hyacinths in the garden 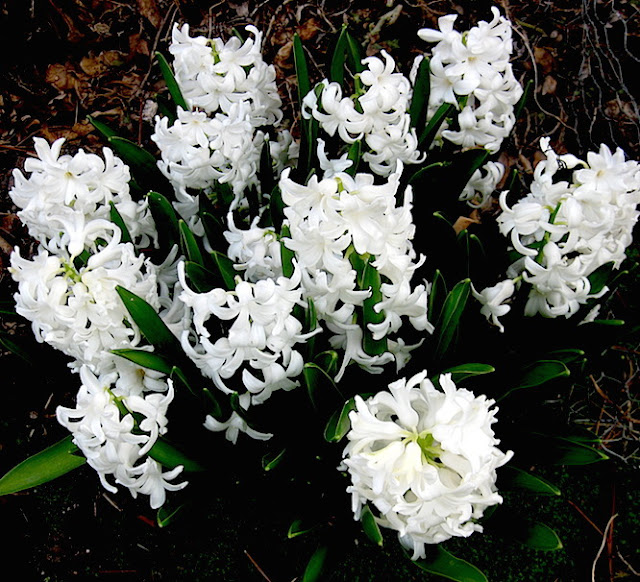 We are cruel to our hyacinths when we grow this hardy plant indoors. We force it to grow out of season in unnaturally high temperatures without proper drainage on a table away from the window.
Worse when we let it die down. None gardeners throw it outside, roots exposed, into a dark corner on a freezing February day.

The emphasis in ‘die down’ seems to be 'die'. Perhaps if we want them to flower next year we should rename the process  'live down'. Indeed when I tried to find a suitable word in the botany books to encapsulate the concept of leaves photosynthesising, eventually senescing and storing food in a vegetive organ there were none!

Indoor hyacinths when finished flowering should be placed in a bright outdoor situation - even better in a cold greenhouse - to continue their life cycle. It is not just a matter for the feeble remaining stored resources to translocate down to the developing new bulb. Green leaves need to work to manufacture new nourishing sugars. They need to be watered and even liquid fed. It might be late May before the leaves naturally turn yellow and shrivel. If you don't do these things you might just as well throw your old plants in the bin! It will take a few years for your hyacinths return to their former glory but most of us like to take on the challenge!

How to properly naturalise hyacinths

Get your order in early and plant new bulbs directly outside in August. It can be as late as October but the sooner the better. Do not buy expensive 'treated' hyacinths, you are not going to force them. Top size is ostentatious, just get ordinary firm fat ones. 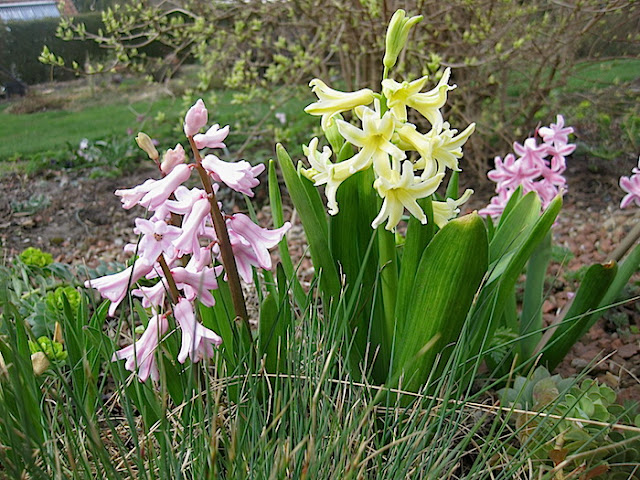 You need to plant them in clear soil. Unlike daffodils, snowdrops, Fritillaria meleagris and crocus, hyacinths do not have the constitution to naturalise in grass.
Plant as deep as their size. Don't be too fussy and if they are not completely upright or at a precise depth it does not really matter. As a none digger I don't make a hole but merely scoop with my spade and pop the bulb under the raised soil. I have never yet used a bulb planter and don’t intend to do so.

Don't bother to try and improve drainage by placing gravel at the base of a hole as is frequently recommended. It is a complete waste of time.
I hope you do not dig your borders or you will lose your future bulbs when dormant when you shred them. 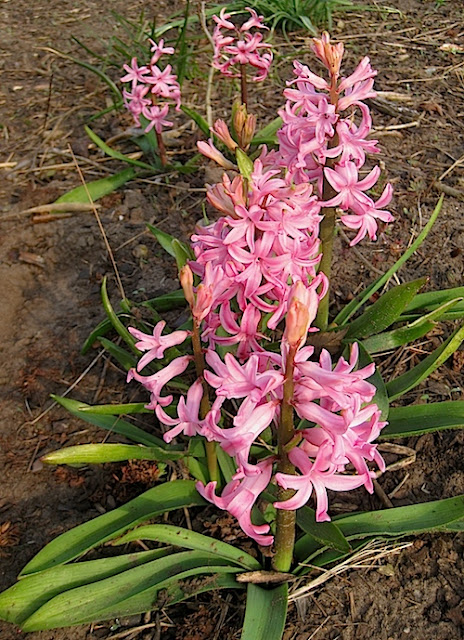 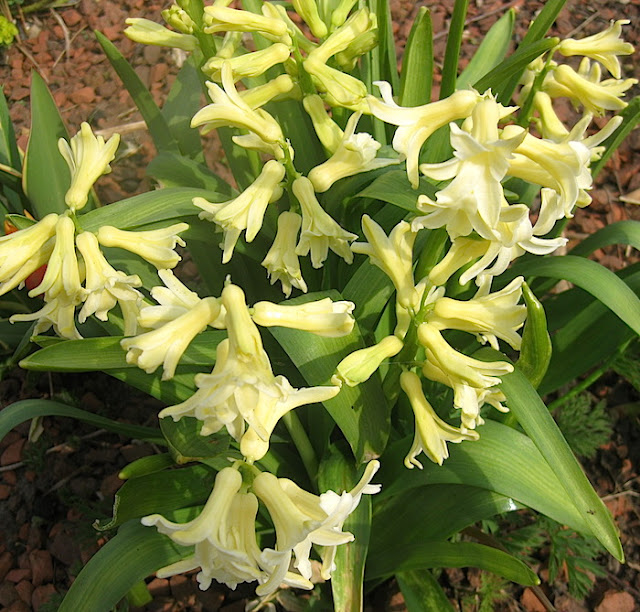 Unless your soil is really fertile and well drained the flowers might not be as big in future years as in the first one but they will grow into healthy and arguably daintier clumps. I have been adding a few extra bulbs for several years and they are littered all over my borders. They get no special attention other than freedom from weed, an open position and chance to naturally die down. Each clump gets bigger every year. 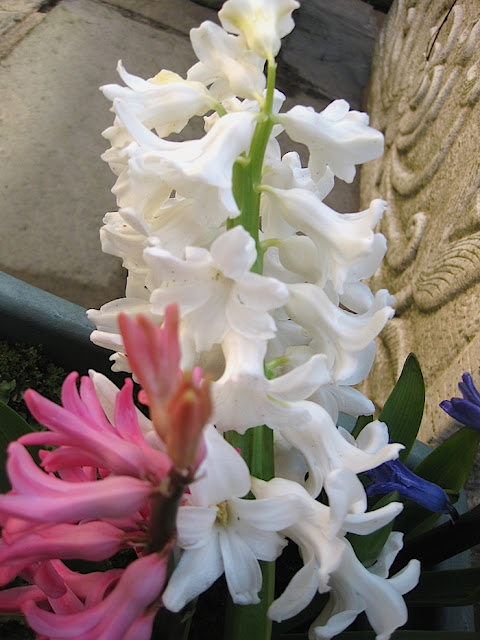 The same rules apply to when growing in the ground. You have the advantage of enjoying the flowers in a temporary display but their early growth and dying down period can take place in a light propagation area.
In pots and containers unlike in the ground, it is necessary to liquid feed or top dress with fertiliser to compensate for nutrients lost by leaching.
Unlike in open soil, you need to give keen attention to watering. It is very important to realise that on a dry windy late winter day substantial dehydration will occur when your plants have become leafy.
I usually find that I cannot recycle tubs of hyacinths more than three or four years. They get crowded, unbalanced, weaker and some bulbs might even die. I start again and any remaining bulbs are popped into the ground.

Some of you will remember this lady played by Patricia Routledge in the TV series 'Keeping up Appearances'. She has been in my mind as I wrote this piece and in her honour I spelt Hyacinth in the title with a capital H!
Like indoor hyacinths she started from humble beginnings and married to higher status and became an hilarious snob.

Many folk start their hyacinths in a cold cupboard - not really recommended - better to start in the cold outside. Brought inside they are 'forced' in warmer conditions. Like Hyacinth Bucket they are very heavily perfumed and if the scent was not so gorgeous you might think it sickly. Like Hyacinth, hyacinths are 'loud', plump and flamboyant rather than delicate, elegant and retiring.
Indoor hyacinths are frequently grown in a 'bucket' - well usually a shallow undrained container. I disapprove.
Hyacinth would not want water to drain on her elegant furniture.
Only posh Hyacinth would insist on growing hyacinths in 'upmarket' bulb fibre - a really 'common' practice! Your indoor hyacinths are best grown in ordinary compost in normal drained pots with an outer container to catch the water. I wonder if Hyacinth would deign to empty out surplus water. She would perhaps wait for her servant. Brenda chastises me when she does the same for me at home.