Confessions of a lapsed dicentra collector

Attempting to leave a record

Thirty years ago I was delighted to be awarded the National dicentra collection but I now wonder if I was handed a poisoned chalice!
It’s not as if one is given the plants in the collection. You have to find and pay for any plants you acquire. Having the National Collection does gives a little credibility when you ask someone for seeds or a plant. I have been sent  seeds from around the world although anything ‘difficult’ usually fails!
No other ‘volunteer’ has come forward to hold a duplicate collection or hold a particular section. I am starting to worry that when I portal my mortal coil that no one will know what I had got or where to find it…or care.

Some dicentras are not easy to grow. Forms of Dicentra peregrina are for me personally impossible. Even peregrina hybrids with Dicentra eximia and formosa are difficult. I hold out great faith for a new three way hybrid ‘Amore Rose’ which I recommend you seek out. It has a strong constitution, delicate fine foliage and pink/red flowers all summer.
(Two months after writing these words I am starting to wonder. Now in July it is looking rather tired but then so do normal dicentras. And my peregrina hybrid ‘Burning Hearts’ has died yet again - but the roots did come in shocking condition from my normally favourite bulb supplier!)

I intend to mainly confine my comments today to Dicentra formosa and Dicentra eximia. Naming  of these in the trade is hopelessly confused as I have previously reported. The epithets ‘formosa’ and ‘eximia’  are interchanged with ignorant abandon. It is 95% certain that the form that you personally have in your garden is formosa and you will know from it’s  characteristic long rhizomes and dumpy flowers.

How can I say that something you might find taking over your garden is difficult to grow?
For a start Dicentra eximia - well for me anyway - has dubious perenniality. It does not live long in my soil and has to be restored from fresh seed which it fortunately sets freely. If your conditions  are really suitable it will self seed itself but if you get a bad germination season you might very well lose it.

Dicentra formosa is generally easy but brings it’s own problems and different cultivars vary in success from season to season and garden to garden. This year for example the very similar ‘Bacchanal’ and ‘Cox Red’ have had real difficulty in making headway in the persistent cold drying winds. I have had to save my rather weak plants by lifting and potting and placing in my  cold greenhouse.
Several years ago I was privileged to meet nurseryman Adrian Bloom. Dicentra ‘Adrian Bloom’ is a very fine red. (I saw it recently on the net as a very fine pink!). We bantered that he could not grow his red namesake but red ‘Bacchanal’ grew for him very well. In my case it was the other way round! 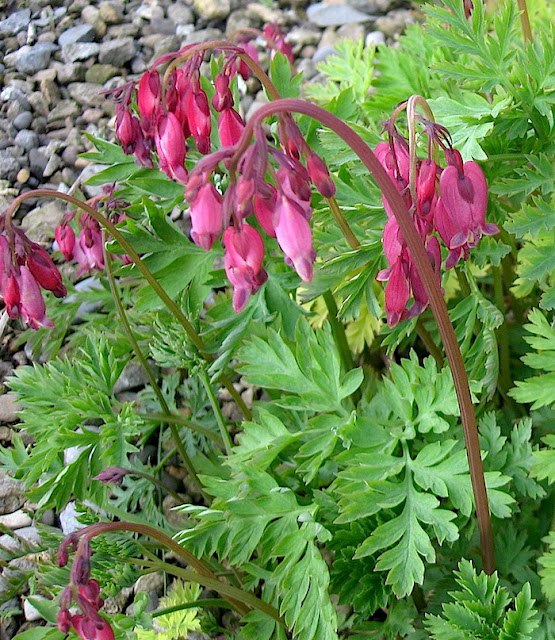 Why Dicentra formosa is difficult to collect and maintain

1 Some varieties - but not all - seed themselves freely and germinate in abundance in February and March. Seedlings are not true to type and are usually inferior and left to themselves will take over. Embarrassing to me when a red one comes up pink! Vigorous wonderful reliable glaucous-blue foliaged Dicentra formosa oregana ‘Pearl Drops’ does not do this but many others do. In fact some varieties self seed so freely that I regard them as a seed-strain.

Seed strains differ in detail but broadly conform to some general characteristics - unless they have cross pollinated with others. I do not now recognise my original ‘Bountiful’ and the original plant is long since dead! Never-the-less the self seeded off-spring in a fairly isolated part of the garden in respect of pollination conform to a similar pattern. At one time  I would buy garden centre plants to check on my naming. Last week I walked past an alleged and un-flowering Bountiful on a garden centre display stand and was not even tempted. It was bound to be wrong!

The pictures below are all self sown plants from ‘Bountiful’ - but who is to say that my original plant was itself not a nurseryman’s seedling too? 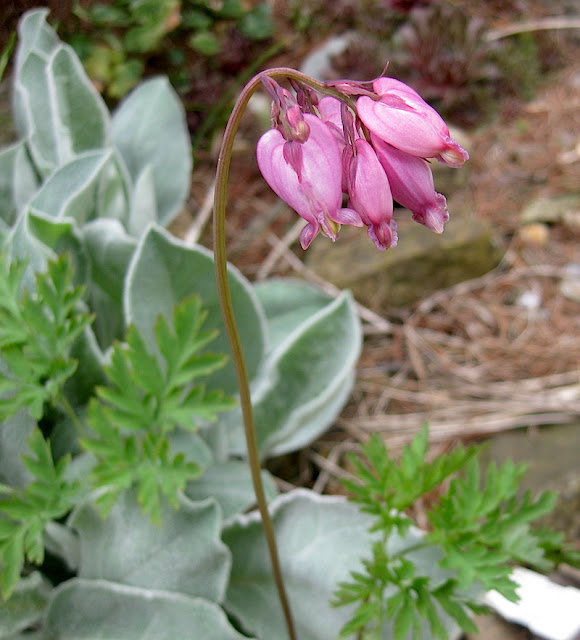 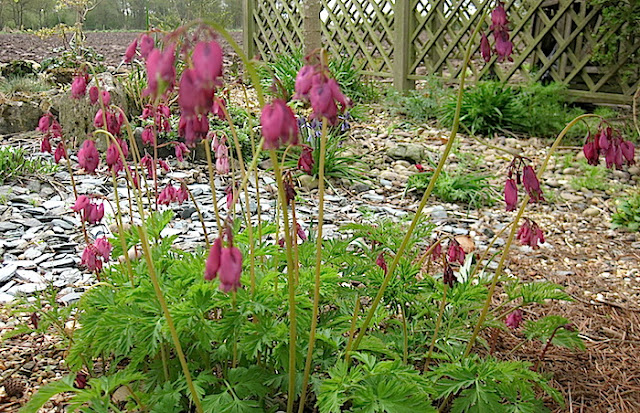 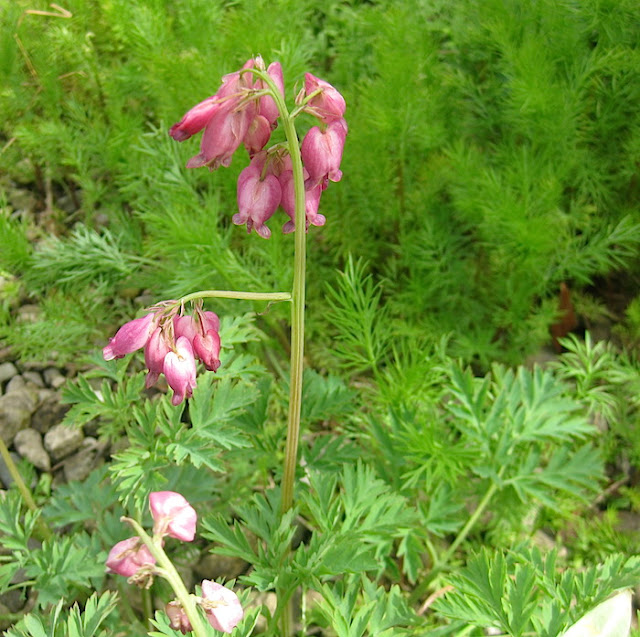 I have another self seeding formosa that I call ‘The Parcevall Strain’. The parent plant had been donated to me thirty years ago by colleague Ernie Oddy who used to do volunteer consultancy and work at Parcevall Hall.

The pictures below are of the Parcevall strain 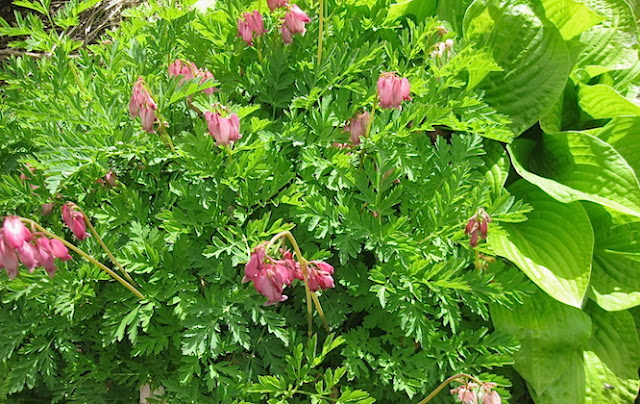 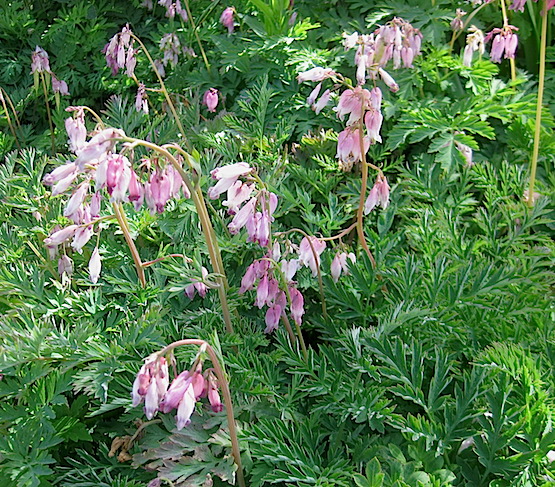 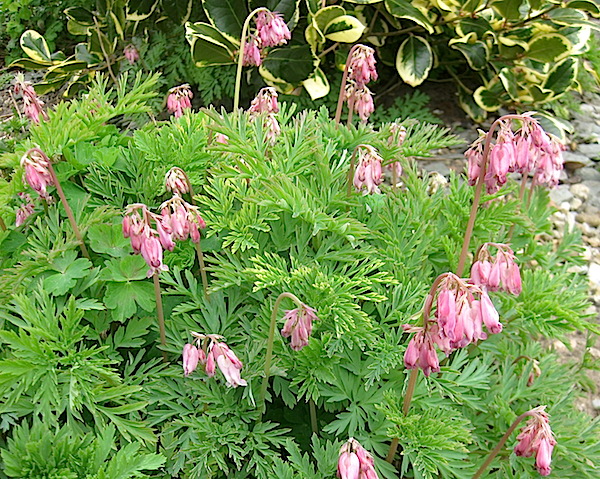 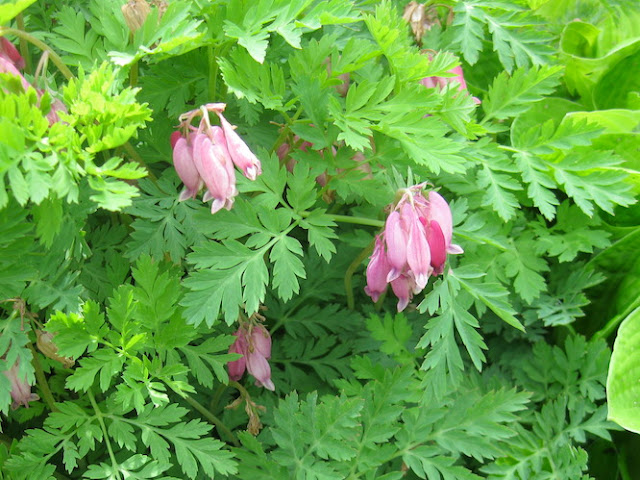 2 Many varieties are not genetically stable. Although I am intensely interested in matters genetic I really don’t understand this. It might be an unstable gene for colour that mutates easily. In gardener’s terms this is called ‘sporting’.
‘Aurora’ is a relatively new variety that might be described as ‘tinged white’. I now have two variants that are very nice pinks. 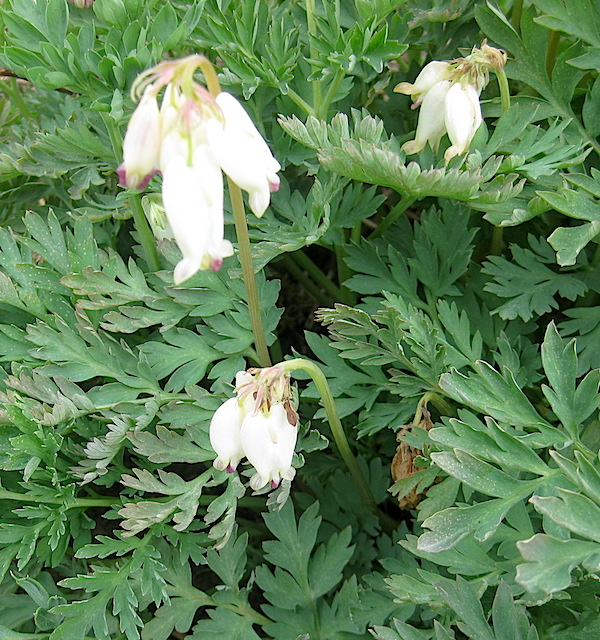 Many years ago I selected for myself a very nice strong free standing pink seedling which I privately refer to as ‘Roger’s Pink’. I now have four vegetative variants. One of them has delicate fine foliage. 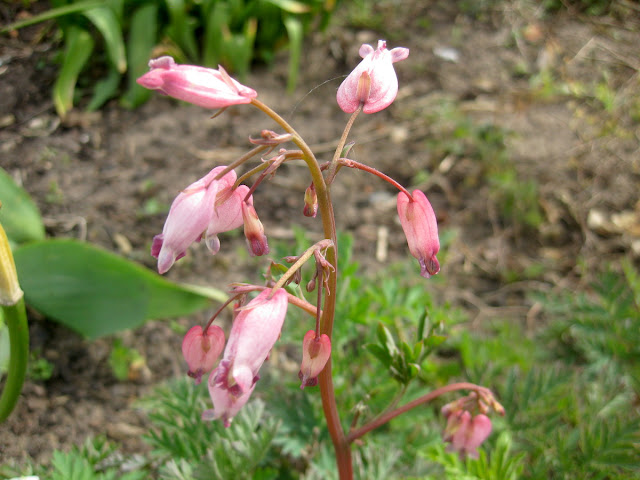 3 As mentioned you cannot be sure of the correct identification of cultivars that you buy. Nurseryman sometimes inadvertently sell similar seed sown plants. ‘Stuart Boothman’ is a wonderful pink variety with very delicate foliage. I have bought it several times and they all look different. It is alleged that clonal material from the original Stuart Boothman plant was retrieved from his housekeeper’s garden. A lady from Scotland sent me a very fine delicate leaved dicentra and I think it is the same one.

A difficulty with Dicentra ‘Stuart Boothman’ is that it’s delicate fine foliage only occurs in slightly starved plants. In the early days we took the students to visit Oxford Botanic Garden. Mr. Cleverclogs pointed to the label and declared to our guide that it was wrong. To my shame the label was right - the plant had received very generous nutrition. You might remember from the post listed below that Oxford’s record with dicentra naming is not very good!

4 Some Dicentra formosa are genetically stable and although they do not cause confusion seeding themselves around they do have variable colours within the same clump. Nancy Boydell’s dicentra, ‘Furses Form’ and ‘Spring Morning’  all three illustrate this phenomenon. 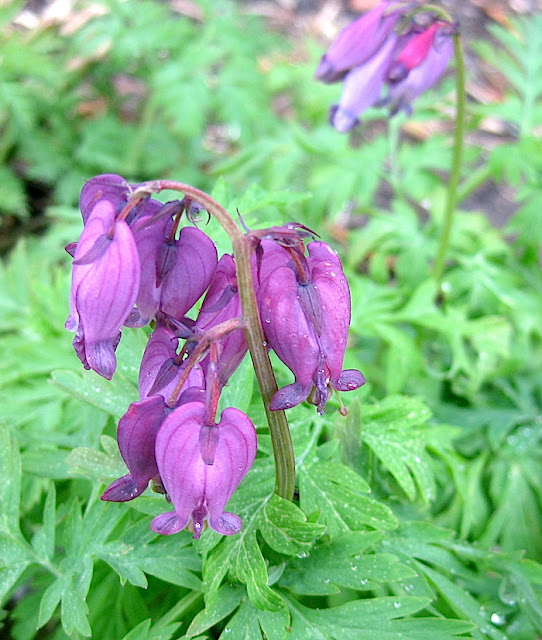 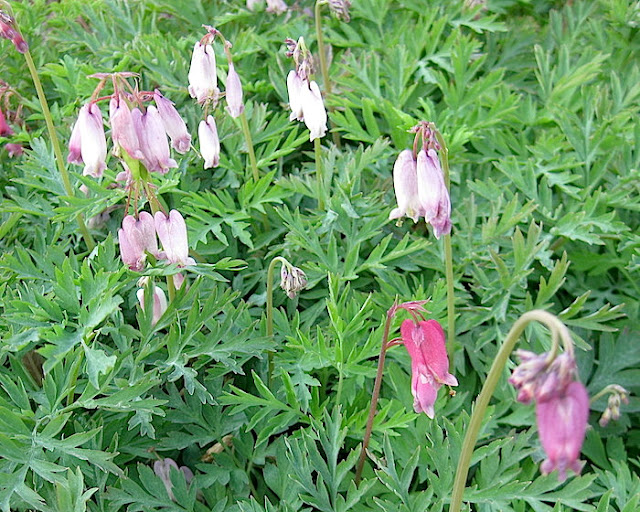 5 Variable colour is always a problem. It can vary with season, level of shade, soil type and temperature. This Spring has been rather cool and my colours have happily been ‘true’ ones which have lasted very well. In a  previous post I have published a picture of Dicentra ‘Roger’s Pink’. It is a genuine picture but bares little resemblance to the colour I recognise.

6 Many nurseryman are rather cavalier about naming. Especially imported ones sold at garden centres. I recently read in a trade magazine that named varieties of Dicentra formosa could be grown from seed!
A nurseryman offered Dicentra eximia alba ‘Snowdrift’. I was sure that it would be formosa rather than eximia and of course it was. As I do not have genuine ‘Snowdrift’ I contacted the nurseryman to enquire about it’s provenance. He quickly backed off and admitted it was from seed!
A real difficulty here is whether ‘Snowdrift’ ever truly existed or was it just a nurseryman's fancy?

Restoring my collection
In my confession I have admitted that my plants are all over the place and only I know what they are - on a good day! Some I know because of the whereabouts of the plants with which they intermingle! I am afraid permanent labels are something foreign to me.
I am starting to rationalise my collection. I have discovered after all this time that I can propagate by division small pieces when they are flowering in May. (I normally propagate from Dicentra formosa rhizomes just before or immediately after their shoots emerge). This is very useful to know because I can rescue small plants when I have a clear identification of them. Even better if some of my plants have sported or self sown a rather nice seedling I can furcul them out and pot them up. I tease out such young plants and immediately pot them and place in my greenhouse away from the vagaries of the weather, especially the wind.

Now in July I have been very pleased to find that that plants propagated in this way have done rather well. (Well not Cox Red, it survives on a thread).
Now I must work out where I am going to plant them!

Links to all my dicentra articles
I intend to publish more dicentra information in future. Eventually I will  bring it together in a special blog section. In the meantime you can find my dicentra posts in the links below. They are also in my theme column but unfortunately the older posts do not seem to display.
Growing Bleeding Heart
Dutchman’s Breeches
My first dicentra post includes a discussion of the misidentification of eximia