Will impending changes to the pesticide regulations deny gardeners the opportunity to buy professional strength glyphosate?

Hitherto it has been difficult for amateurs to legitimately purchase full strength glyphosate concentrate. Will dubious health and safety considerations be an excuse to completely close the market?

In addition, after 26 November 2015, it will be an offence for anyone to purchase PPPs authorised for professional use unless they have ensured that the intended end user has a certificate.

If you don’t already have a certificate, you will need to get one by 26 November 2015 so that you can continue to use PPPs as part of your job after that date.

You will find these two significant paragraphs in an anodyne amendment by The Health and Safety executive to the Pesticides Rules.

My concern is that this will firm up the distinction in the market between commercial sources of glyphosate and the watery tinctures sold to the general public in garden centres.
Note that to buy ‘proper’ glyphosate you will need a certificate. Note the subtle phrase 'as part of your job'.

I wonder what 'it will be an offence' really means. The amendment certainly offends me! Will the full force of the law fall on my head if I buy commercial glyphosate. I am fully certificated but I don’t have a job. Do I need to work on a farm or a country estate to obtain it? Do I need to pop over to France to buy it?

Glyphosate granddad: the grandfather’s rules.
When the pesticide rules were brought in late last century there was a concession that if you had been using pesticides on farms or horticultural holdings and you were born before 1964 you would not need the new certificates.
This concession is about to be withdrawn.

In practice to farmers this of little consequence. The word 'in the pub' is that most farmers have members of the family who do possess certificates. Failing that perhaps some of their employees, such as the apprentice who has done 'the tests' hold the relevant papers. And of course they can buy from a fellow farmer. There is not a farmer in the land who will stop using glyphosate. Some will become criminal of course.
I imagine you will be able to count on one hand the number of pensioner farmers who sign up for night school. Grannies, eggs and sucking come firmly to mind.

Consequences to owners of large gardens…  and folk who maintain cemeteries.

Let’s do some maths. Gardeners at the ‘soft end’ of the garden centre market buy already diluted ‘ready to use' glyphosate. I recently saw five litres  ‘reduced’ to £40 forty pounds. This would be enough glyphosate to a third fill my 15 litre knapsack sprayer. This is £120 a sprayer full and £240 for every monthly visit to each of my two cemetery gardens. Every month five hundred quid!

Another way to look at it is that each time I fill my knapsack with a diluted 200ml commercial concentrate it costs me one pound. Admittedly this is a quite weak concentration of a one in seventy five dilution but a hundred fold difference in price compared to that for anyone who buys ready-to-use glyphosate!

The law of unintended consequences
Not all gardeners use glyphosate. I know hundreds of respectable people from all walks of life. Of those that are gardeners I know none who use weedkillers who would have any reservations about using commercial Roundup when they can get hold of it. They accurately perceive it as a more concentrated and cheaper form of a very safe and effective weedkiller. They are right. If it really is illegal - but the law is so obfuscated that this is not clear - then a lot of normally law-abiding citizens are committing a crime. That can’t be right.

If people fear that the new amendment which comes into force on the 26th of November will make it more difficult to obtain their supply they will buy it and horde it. I hear anecdotes that ten year old glyphosate is every bit as efficacious as pristine product. Long term storage can’t be right either.
I emphasize that stored agrochemicals must be in a safe store behind lock and key.

The unintended consequence of enforcing two separate markets that I fear most is that gardeners might be tempted to accept supplies of concentrate from a registered user in other than it’s original container. Some agrochemicals in concentrate form really are dangerous.
I emphasize that all horticultural chemicals whether amateur or professional must always be kept in their proper fully marked and labeled containers.

Do the authorities really want to encourage folk who are deprived of their favourite weedkiller 360g/litre glyphosate to buy it legally in a supermarket in France? 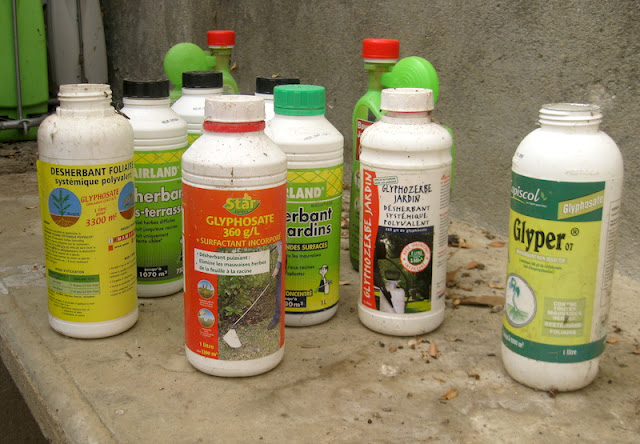 Somewhere in France a gardener’s display of his herbicide containers. Bought at the amateur store they are all full commercial strength glyphosate.
Why penalize the public?
What has suddenly changed?

I know no suggestion that professional chemicals have become more dangerous. Rather the opposite.

I know no evidence that those amateurs who use professional glyphosate do sillier things than those who buy the weaker version in the garden centre. Quite the reverse.

I see no evidence that professional users use glyphosate more carefully than amateur gardeners. Indeed some farmers are very complacent.

I do not understand that a very safe chemical in concentrated form suddenly becomes dangerous when its concentration is double or treble of what I can buy in a shop.
I emphasize that for all practical purposes glyphosate when sprayed on weeds and appropriately diluted is exactly the same whether bought as a trade chemical or as an amateur product.

The amended regulation will be represented as a simple rationalization of existing regulations. I won’t comment.

Why two markets?
It is right and proper that dangerous agrochemicals should be restricted. Most agrochemicals are safe but not all. It is not unreasonable that there are two separate markets. What is unfair is that responsible individuals are deprived from obtaining those professional products that are safe ones. It is not as if the relative safety data is unknown.

If only it was made clear that if an amateur gardener achieves his spray qualifications he can buy commercial glyphosate to spray in his garden. I really cannot figure out if this is so!

Two markets suits manufacturers and traders. Suppliers to amateurs can sell small quantities of weak glyphosate at inflated prices. These partially reflect the extra costs of retail and providing a service.
Professional suppliers are not really interested in the amateur gardener who buys very small quantities, asks too many questions and is administratively inconvenient.

Some horticultural sundries suppliers trade in both markets. When you go to their website many of them blank amateurs out of their trade pesticides section (pesticide is the generic legal term for all plant protection chemicals). I don’t think it is fair that they will only sell you the same chemicals in dilute amateur form with much juicier mark ups.
Posted by Roger Brook - No Dig Gardener at 09:06