The soil and the plants in Cathi’s new border. (Part 2 of a series)

I started this story when I embarked on the elimination of Cathi’s nettles and ground elder on her roadside verge last May.
I published the tale in a two part series. I subsequently revealed at the start of a new series that I had cheated and had deliberately commenced planting prematurely for reasons of timing when some of the ground elder was still there! I stated that my new ambition was to establish a garden feature planted in grass. For no very good reason I wanted the main planting to consist of monocotyledons. That’s spiky leaved plants like daffodils and iris. You need to read Part 1 first.

The soil
Some of you might imagine that glyphosate spraying of unwanted vegetation and later subsequent direct planting is a lazy and inferior way to make a new garden. On the contrary it is a way of retaining natural soil fertility without very much labour and without the use of damaging machinery.
The downside is that you have to be a patient. In the case of my methods in Cathi’s new feature, a modern family might have moved house before it is completed! (I must not destroy my case for the sake of a cheap line. I hope what follows will persuade you that a new herbaceous  border - for instance  - will be healthy and luxuriant just as quickly as when prepared by traditional digging. It will also be completely free of perennial weed).

Some might harbour the notion that spraying off with glyphosate is somehow unnatural? It is much less so than a traditional gardener’s disruptive soil churning in ways never attempted by nature.
If you imagine you are poisoning your soil and its ecology you are wrong.

Cathi’s border had not been cultivated for at least twenty years. For all I know it might have been a hundred. In that time nature has worked its magic. Plant roots have deeply penetrated and created natural channels. The worm population is high and worms have  improved drainage and soil structure. If you examine this soil you find it is composed of fertile crumbs. Organic matter is high because nature has recycled the products of years of photosynthesis and organic content has not been oxidised away by gardeners’ misguided cultivation. Although you cannot see them the soil is permeated with mycorrhiza. All natural life is in wonderful balance.
As a result of spraying all those unwanted perennial weeds die and donate their nutrients and organic substance to the soil. There is no wasteful time-consuming removal and destruction by burning. Even better the weed’s honeycomb root-print remains to guide new roots and aerate and drain.

Why should the gardener destroy all this fertility for his planting? Small holes will suffice to introduce plants. Other times a slit and a footfall will do. With bulbs and dormant plants merely levering a spadeful and tucking them under is all that is needed.
Where nature has been in control there is no need for digging.

In contrast soil damaged by previous ploughing or rotavation which has created pans and other compaction or loose soil that has been driven on when wet by builder’s machinery might need artificial correction.
The plants
Bulbs
The roadside plot already contained hundreds of snowdrops which have been completely undamaged by the spraying when they were dormant last Summer.
Last Autumn the rabbits had a field day in another part of Cathi’s garden and thoughtfully extracted a generous supply of daffodils, snowdrops and bluebells that were collected and planted
I had previously rescued some native Lenten lilies ‘in the green’ that had been disturbed and scattered to unsuitable places by our 2014 roadworks. Some spare daffodils from my own garden were also transferred over.
I made out an order to Parker’s Wholesale for daffodils, crocus, scillas, chinodoxas, camassias, Fritillaria meleagris and (I seem to remember) hyacinths.
Everyone knows that tulips are completely unsuitable for naturalising in grass. As my methods are eccentric I thought I would try some. They will be lovely the first year....
My ipheions have gone from strength to strength since I posted about them and strong sprouting bulbs were planted in September.

In my own gardens the clumps of Scilla peruviana had made strong green clumps in December and clusters of bulbs were teased out for planting.
For several years now I have been successfully overwintering gladiolus in my borders. Not the gaudy large floppy ones but the more compact kind. I lifted strong not yet dormant corms still attached to their stems in November. They will look magnificent naturalised  amongst the fescues.
The plant divisions
My garden has a huge stock of plants Many of my herbaceous perennials have been undivided for many years and offer a huge resource of propagation material. It amazes me how many gardeners, including many very good ones, are scared to divide their most precious plants and instead increase their stock by buying new ones! 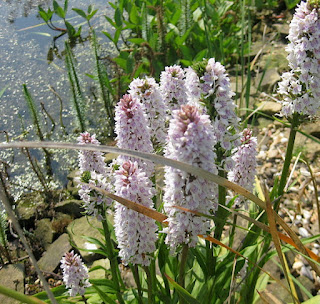 This wet Autumn and warm wet Winter has been wonderful for planting. No dig gardeners rush out and lift and plant when it rains. There has been zero need for any watering!
I have now been planting for more than six months and it gives me a thrill when I stumble upon a new suitable plant I had not previously thought of. There is of course no record of my random planting and sometimes one plant goes in on top of another. That merely initiates a little more propagation! 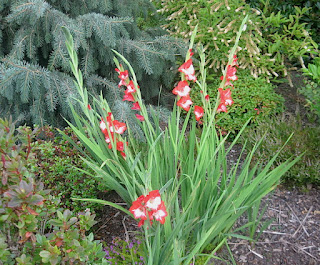 I cannot today recall all the plants that have gone in and the list is constantly extended. Here are a few examples.
Schizostylis  I have very strong aggressive clumps of a pink variety which flowers in October and November. It is a bulbous plant and small clusters of shoots are easily slit in. Dierama divides in a similar way and also slips into new ground.
Montbretias There is a very wide range of lovely colours and as any gardener will tell you they enthusiastically spread. Indeed it is a major gardening challenge should you wish to kill them! I have rejected the very tall varieties and have also avoided tall vigorous grasses.

Iris ‘Perry’s Blue’ and numerous other iris. Some of the bog irises make very strong plants that are almost impossible to chop. I needed to take a long handled axe to some of mine.

Cyclamen hederifolium I have huge clumps of cyclamen, the product of many years of self seeding. Lacking imagination I have never thought of separating clumps of them ‘in the green’. It has now dawned on me that they lift  and transplant extremely well.
Hemerocallis is one of natures more versatile plants.

Sisyrinchium striatum and similar species will blend in very well.
Briza maxima. Rampant in Worsbrough Cemetery, I have scattered seed and for good measure have brought back a few plants. I have planted several other ornamental grasses albeit dwarf ones.
Encrusted saxifrages Although these are not monocotyledons, I have many strong plants of these ground hugging so-called alpine plants that provide ground concealing carpets. I have not resisted the urge to try some. I believe my spraying is sufficiently sensitive to avoid them and yet keep my beloved fescues at bay!

Liriope, liatris, tritelia, tradescantia, kniphophia and chives have all joined the party.

There will be more plants and bulbs going-over, going over to Cathi

These are posts where I have reported on this project
Start last May with first spraying
Continuation of the weed control
Justification and statement of ambition (same link as at top)
Also relevant
Ode to digging
Rushing out to plant when it is wet
You can read about agapanthus, ipheions, daffodils, cyclamen and Tignes' wild flowers by putting the names in my search box.