Oldies day out, Visit to a restored pit heap 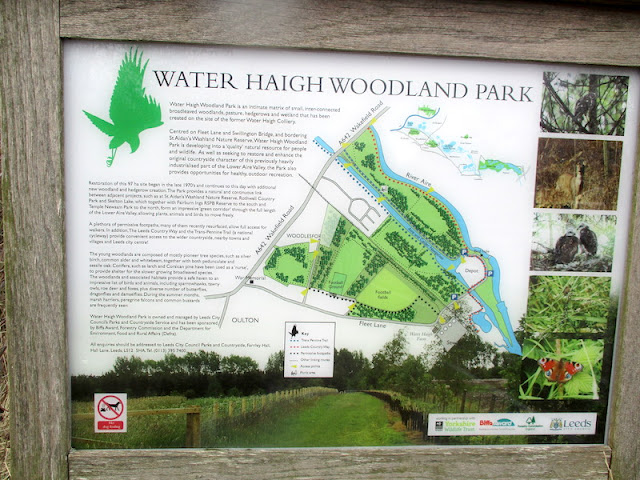 After the joy of the rhubarb farm the main attraction was to see the site of an old Yorkshire slag heap forty years on. After all Peter Williams the restoring genius was one of our number.

A political decision had been made that as new motorways extended to the north they should show a better image of our great northern counties. Without major investment more than a hundred years of landscape despoilment would be somewhat revealing.

It is not easy to make plants grow on colliery waste. Acidifying sulphur can lower pH to to as low as 1.5. In contrast garden soils rarely go down to pH4. The heap in question was subject to spontaneous internal and surface combustion. Slag lacks organic matter and organic life. It is devoid of many nutrients significantly nitrogen and phosphate whilst certain minerals  such as iron are present in toxic amounts. It is not water retentive. Steep slopes are susceptible to run off and erosion and have very poor rainwater absorption.

Man has extracted minerals for thousands of years. On many sites nature has pointed the way to landscape restoration but it takes a very long time. Unlike extraction of china clay, gravel and stone many mined minerals leave toxic residues and can cause pollution.

Plant growth is the key to turning slag into what passes for soil. Organic matter in the soil holds nutrients and water, supports soil life, helps mineral particles stick and clump together, improves structure and aids root, air and water penetration. In turn as a soil develops there can be a succession of improving and aesthetically pleasing vegetation. A virtuous cycle is eventually created.

Iron pyrites in coal slag is tremendously acidifying. Heroic amounts of lime were needed in the first few years of the project. A gardener such as me has no comprehension of the vast quantities needed, the amounts used were off the top of any gardening scale.

Nitrogen is the key to strong plant growth. There were two practical ways to provide it, high nitrogen fertiliser and nitrogen fixation. Both were needed.

Use of fertilisers
I have argued before that fertilisers by virtue of maximising the production of organic matter improve fertility when all the organic matter is returned back to the soil; in this case direct from the plants. Because nitrate is readily leached from the soil, nitrogen rich general fertiliser needed to be regularly applied over several years. As organic matter builds up it becomes the soil’s nitrogen store.

Part of the project was to restore some of the site back to agricultural grazing. It was only when reluctant farmers were persuaded of the necessity of fertilisation that grass establishment really succeeded.

Nitrogen fixation
Where legumes such as white clover can be established they host nitrogen fixing bacteria that can provide an ongoing substantial supply of nitrogen to the soil. Clover needs sufficient phosphate and lime to be really successful. Grassing down mixtures included several nitrogen fixers and plants with deep penetrating roots.
Nitrogen fixers like lupins, tree lupins, gorse and broom grow very well on infertile nitrogen deficient embankments and such plants were seeded too.

Site preparation
Planting and seeding followed substantial slag redistribution. Suitable gradients and new drainage patterns needed to be created. Steep embankments would be subject to water erosion. Where possible water should be absorbed into the ground.
An unusual feature was that because the slag contained combustable material it needed to be consolidated to exclude penetrating oxygen as it was graded down.

The trees
Much of the site was intended to develop as woodland. Planting would start a natural succession. We saw on our visit how this had proceeded with time. You can never really know which species will be really successful and plots of several species of one and two year old trees were tried. No doubt the better prospects such as birch were planted in greater numbers. The greatest successes were birch, whitebeam and black Austrian pine.

On our visit we witnessed beech and oak only now starting to establish.
Although such plantings are intended to grow into seemingly natural woodlands suitable species are limited and projects will be most successful if they use plants that grow naturally in similar habitats wherever they come from. It would be foolish to insist on only planting so called natives.

Thank you Peter taking us to this fascinating country park and for all your explanations. There are still many more questions I want to ask you. There are some things I still want to discover such as, what is it like in Summer, what is the herbaceous understory - are there any bluebells, why on an acid soil (now about pH5) are there no rhododendrons and what is the current management?
I think another post will be needed!