Attracting bullfinches to the garden 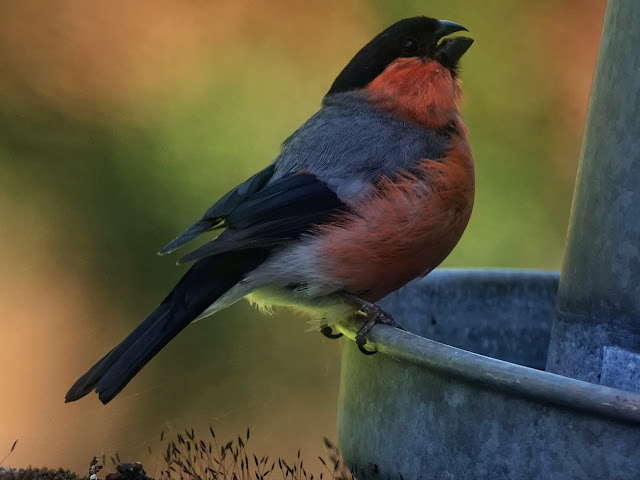 Po wants them to come to his bird feeder and Peter watches them return every year to eat his mourning widow seeds. (Geranium phaeum) It would seem from Po’s video (below) that they are happy to come for his sunflower hearts. At the time of writing we are hoping that they will return to Peter’s garden for him to get some pictures.
We wonder what is going on.
I must warn you that this post written in anticipation ends with a damp squib 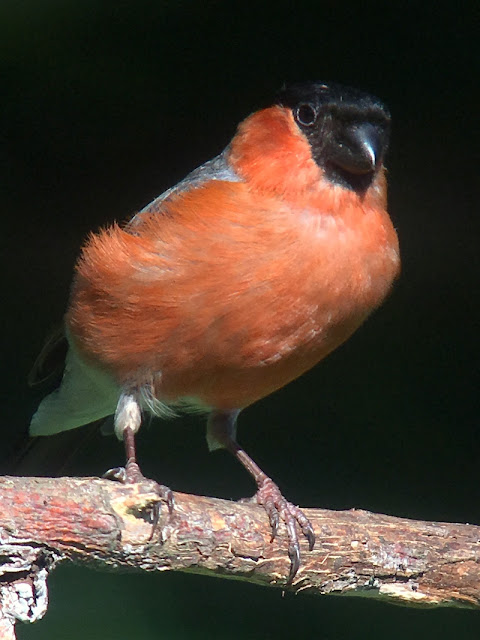 About bullfinches
A secretive bird, they are shy to come to the bird feeder. They have an omnivorous diet eating insects and plants. To some they are not wanted munching fruit tree buds and because of their partiality to devouring soft fleshy seed-rich raspberries. Their liking to blackberries is less of a problem in the countryside than it is in the garden. No doubt they spread bramble seed around.
If you are good at growing nettles, docks, ash, birch and honesty they might very well love your garden. No hope for me then except that I do have  - to Brenda’s derision - prolific Geranium phaeum at home and in my cemetery gardens a great deal of honesty.
I never see bullfinches, but then I am not good at looking!
They inhabit light woodland fringes. Much of Peter’s garden is wooded. This might be behind our story today about their liking for the seed on his Geranium phaeum. The small mystery is why bullfinches love his widow’s weeds and then when we ask all our birder friends no one else has noticed. Have Peter’s bullfinch learned about phaeum and passed the information on to their chicks? They return every year.
About Geranium phaeum 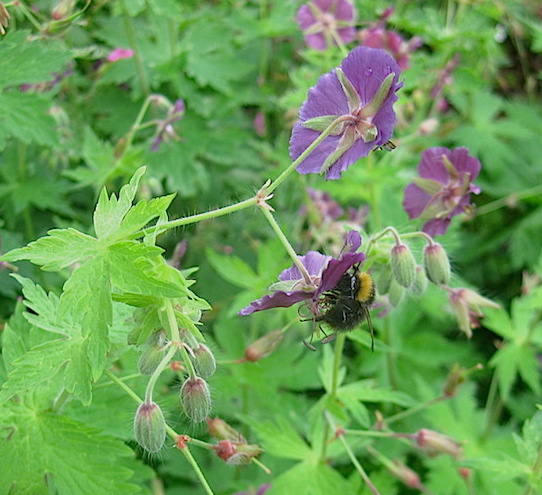 It is a beautiful geranium but perhaps best in a picture. Unless you look closely in the garden you miss the gorgeous small dark cranesbill flowers. An old slide in my cemetery lecture was metaphorically drooled over by audiences for thirty years! I mentioned recently that blogging concentrates the mind. In this case I now notice that it is gone from the cemetery but in my own garden it is taking over. Hence Brenda’s ire. It is ridiculously easy to propagate by division at almost any time of year. It will be returned to the cemetery in large quantities this Autumn and already several cut back clumps now nestle in Cathi’s garden.

Although the dusky cranesbill - also dubbed the black or mourning widow - often seeds itself around, some varieties are shy seeders which is no good for the bullfinches. It is a case of where natural species are better than hybrids. Or perhaps not if you just want the flowers or your local bullfinches do not know about the seeds.

In the past I have cut back my early Summer geraniums tight to the ground with my hedge clippers (I do not have a strimmer). They rejuvenate a tight mat of new leaves within a few days and remain as nice ground cover for the rest of the season. It is the recommended way. It is no wonder that if cut back they are not on bullfinch agenda.
Is it worth keeping the dead tops for an extra month just for the birds?

I am on a learning curve and am watching the dead heads on my geraniums. They look pretty scruffy. Not all the flowers have set seed and the pointed dispersal bills look very small. I read that the seeds mechanically disperse. At what stage do the bullfinches take them? What does the seed actually look like? Do birds like the seeds of other geranium varieties - some look plumper and more inviting?

Thinking aloud - pondering about animals learning
Remember when milk bottles had silver tops and a lovely yellow cream line. Now that questions are being asked about homogenisation's effects on gut bacteria and cream is about to be reinstated as a healthy food perhaps they will return. Dream on.
Every tit in the land knew how to burst the tops open to get to the cream. First observed in 1921 after several decades it became almost universal bird practice to wait for the milkman.
I wonder if we started to use silver tops again how soon they would relearn?

Animals do learn and pass on information. I see on our bird feeder ever more varied contortions as birds twist and contort and pigeons stretch up from the wall to the seeds. Birds never designed to flutter and hover seem to get to the food.

My garden has no boundaries and at Seaton Ross I have always had rabbits. In fifteen years they had never discovered my astrantias. They have now!
So much for my skills of identification! I just assumed that my astrantia’s lack of progress was persistent snail feeding in this very wet season. It has now dawned on me that my astrantia’s repeated decapitations with clean secateur sharp cuts is the wretched rabbits munching. They all seem to know. 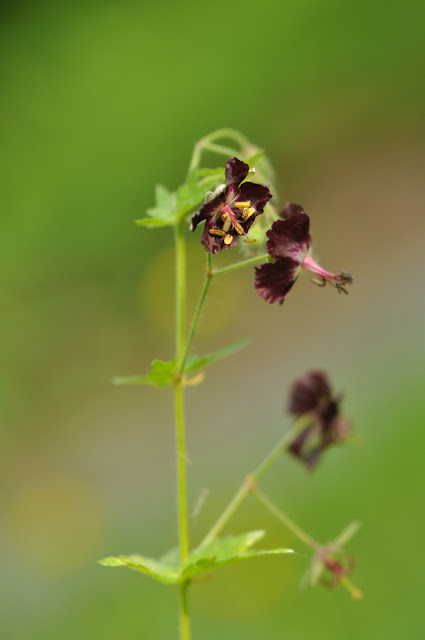 Peter’s bullfinches have learned about the dark lady and have passed it on to their children. Not many gardeners grow phaeum. Not all phaeum sets seed. Gardeners are too tidy and cut back prematurely. I fear that Peter’s secret will be confined to his garden.
So what should I put on my bird-feeder to bring in the bullfinches?
I actually tried a few bunches of phaeum heads on Brenda’s bird feeder. No joy there. Perhaps as Brenda is less assiduous in stocking it when there are so many seeds in the field few birds are coming?
I wonder how many gardener’s provide their own seed heads for their bird table rather than buying imported seed?

I have noticed over the years how birds in one garden strip seed and eat buds and leaves and not in another. They don’t seem to know and some gardener’s plants are left well alone. It might be that some varieties are less tasty, local bird populations may be low or more tasty temptation is available elsewhere?
For years birds left my beautiful red currants. It was about the time Brenda decided she would like to start using them in the kitchen when my birds started to strip them. Ah well we had the blackcurrants! Not this year, my beautiful ripe black fruit was gone overnight. Now the secret is out they are probably doomed. They have told Cathi’s birds and she has no blackcurrants either.
My pigeons have gradually learned that my brassicas are tasty all year round and not just as small plants in Spring. I now cover them with environmesh for the complete crop. I wonder how long before they learn to crawl under? 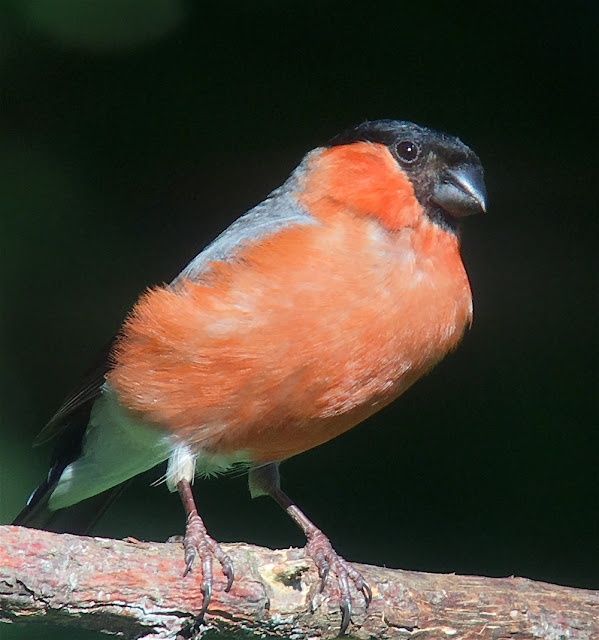 Po Simpson who has kindly provided me with the bullfinch pictures and videos has recently noticed that his goldfinches have a new way of eating the niger seed from his feeder. Instead of pecking a seed at a time they have learnt to initiate a more fulfilling flow! I wonder if he has made a video? He has made several videos of normal goldfinch feeding which at the present time can be viewed by pressing the u-tube link at the top.

Learnt on a steam train
Last week we ate dinner on the North Yorkshire Steam Railway with friends Mike and Isobel. They had noticed this year that the bullfinches in their garden had taken a liking to the persicaria in their herbaceous border and had provided them with much pleasure watching them eating the seed.

Mike as a keen fruit grower added a new dimension to the discussion when he lamented how bullfinches every year return to eat most of the buds on his red and blackcurrants. They come in mid Winter when the top is off his fruit cage because of the snow. I asked him as a botanist whether the tastes and flavour of the fruit may also be present in the buds. He thought so.

A big let down
If the bullfinches returned this year Peter was sleeping! His Geranium for some peculiar reason set very little seed. We do hope his bullfinches remember and come back next year 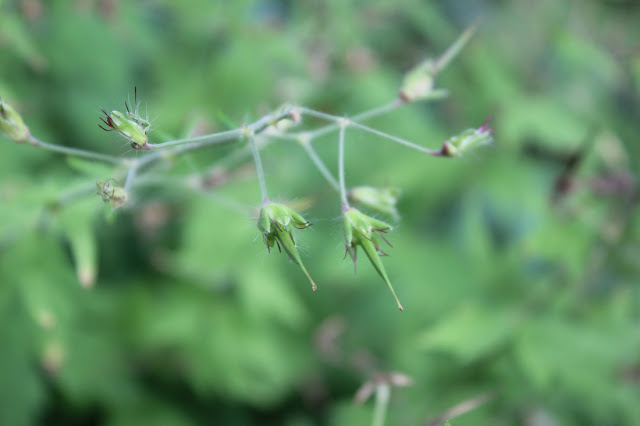