How to grow Zantedeschia 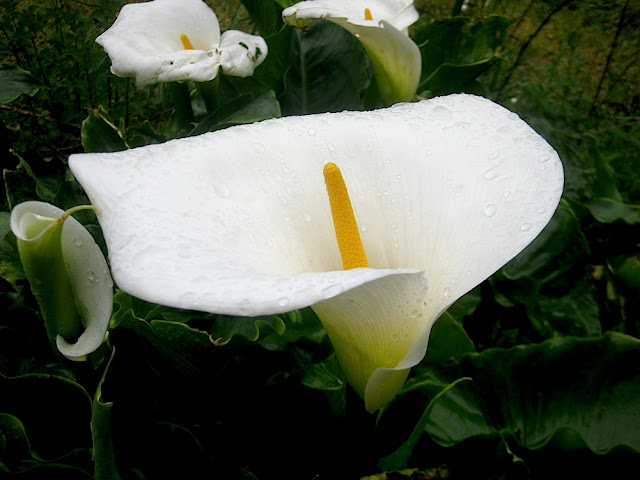 Little did I imagine twenty years ago when Steven married Haley and the bride carried Arum lilies which also bedecked the tables that I would ever successfully grow these magnificent cut flowers. At that time I lived in dry Bolton Percy and without using copious watering they would never have thrived. With regard to watering I used to be rather self restricting and if an established  plant needed watering in the garden I felt it to be not worth growing. That included vegetables down on my allotment.
Now in my Seaton Ross garden zantedeshias are littered everywhere and make magnificent strong deep rooted plants that add brilliant white to the garden from May until September. My very deep sandy soil overlies clay that creates a water retentive basin. A huge ancient agricultural drain takes surplus water away and half of my garden boasts that rare condition of all year round well-drained moist soil.I have more than a dozen randomly distributed two to five foot high zantedeschia specimens.
(Whoops I have written too soon and this August we have run into quite severe drought! My plants look healthy, some are setting seed but there will be no flowers for next month’s Open Day)

Zantedeschia aethiopica ‘Crowborough’ is an almost fully hardy bog plant that can also be grown in a pond as an aquatic. I have doubts about its long term success in open water but it will certainly survive through the Summer! I would be very interested to hear of anyone who grows it permanently in the water. I tend to think that bog plants such as this arum and my own ten foot high gunnera prefer to be planted next to water but just a little above it where their roots can penetrate down.

French interlude
My pictures of Brenda’s son’s zantedeschia in France provide some evidence of their permanent success in very shallow running water. They are absolutely six foot magnificent. The ancient traditional public laverie spills spring water into a very shallow stream that runs across his land. Needless to tell you I brought a few very small divisions home. With patience very small pieces after a few years made wonderful huge plants. 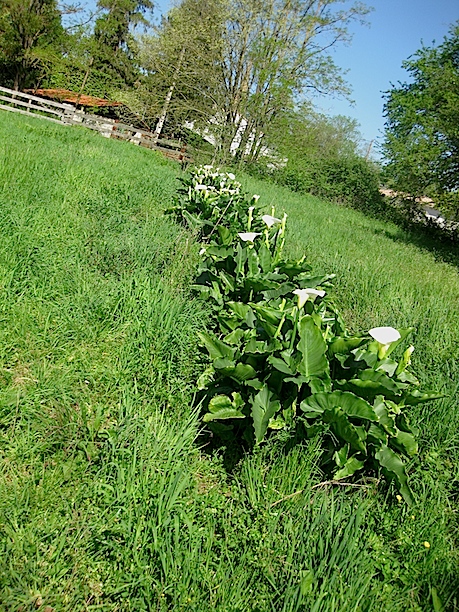 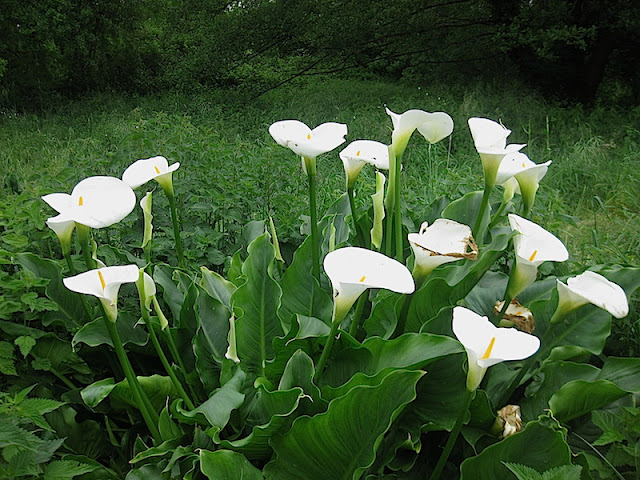 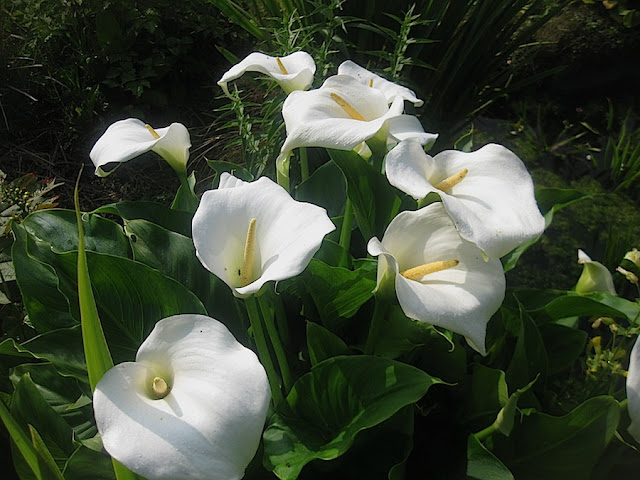 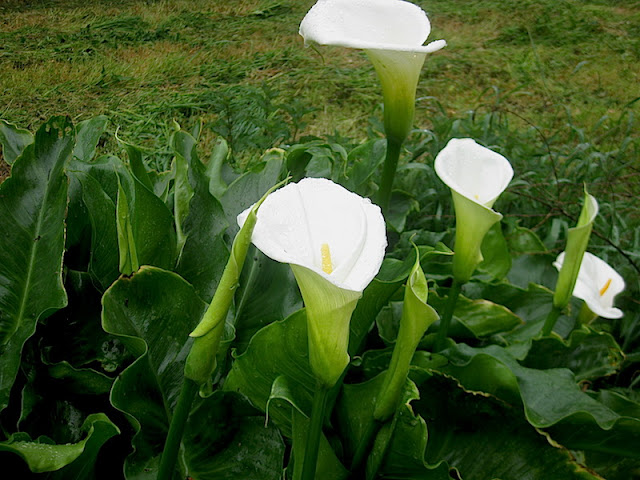 The methods of growing the hardy Crowborough variety and similar cultivars is very different to those for the widely available more compact coloured tender hybrids which I will consider below.
'Crowborough' is really quite hardy, especially when established. Mine survived the notorious 2010 ‘double Winter’ with minus eighteen centigrade air temperature registered in both January - March and December. Just!
Very small plants like the one I brought back from France get going better if you give them greenhouse protection for their first Winter.
They thrive in moist soil although many gardeners successfully grow them in ordinary deep  well drained soil. They are best undisturbed and go from strength to strength with each succeeding year. My own grow in a wide range of conditions but the plants in full light do the best.
Although the books correctly tell you that you can lift and divide them this does give the numerous propagules a considerable check. I prefer to notch or tease out pieces with a spade leaving the parent little disturbed. Small pieces can be potted for coddling in a greenhouse and larger divisions can be directly planted. My plants rarely if ever go completely dormant but are best divided in Winter or Spring. For the record my French rooted shoot was taken in August.
Your established plants need plenty of space when they will make strong large specimen clumps.
Do they respond to fertiliser? Are they better with mulching or adding extra organic matter? Probably yes but I never bother. Do they get pest and disease? I have never noticed - except the tiny black insects that show up on the flowers.
Should I let them seed? Probably not and I remove the dead flowers to encourage more. Do they need staking? No.
Growing the coloured hybrids 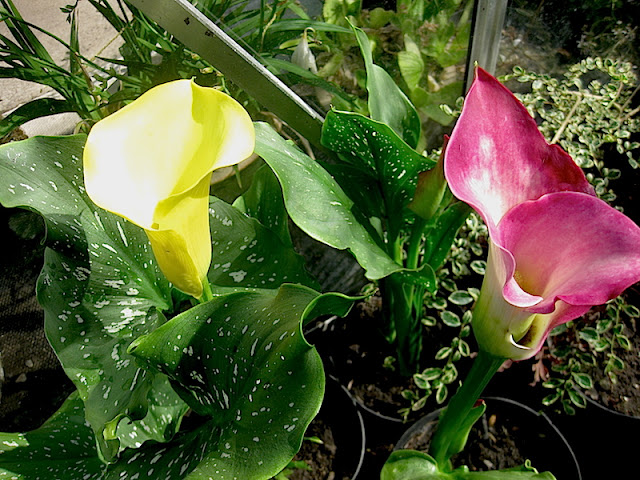 For fifty years I had ignored the coloured hybrids that are sold as ‘bulbs’ every Autumn and Spring. Early failures with rotting-off tubers and weak spindly growth when directly planted in the garden persuaded me that they were a complete waste of time. Especially so when I knew them not to be Winter hardy and be best started off early with artificial heat.
Although I do love our heated conservatory, artificial heat for greenhouses has never been the way for me. Many texts wrongly quote rather high minimum starting temperatures as essential for these so called callas. That might be appropriate for commercial cut flower growers but not for me.

Last year I decided to try some coloured calla cultivars in my unheated greenhouse. ‘Unheated’ is a bit of a misnomer as so called cold greenhouses heat up very well with the sunshine. Even better the warmth is suffused with healthy light. Artificial heat in a greenhouse on dull days very early in the season is not usually a good  gardening option!

I am still on my learning curve. In researching this post I learned that these coloured zantedeschias like it rather drier than the hardy species. Especially when starting in their pots and before new growth appears when the roots can easily rot. Like any plant that grows luxuriantly when they get going they then need plenty of water.
I  grow them in large pots of my own sandy soil enriched with slow release fertiliser and regularly top dressed with my yaramila general fertiliser. Most gardeners chose to liquid feed. My plants are stood outside throughout the Summer.

I have fallen in love with these coloured hybrids.
Less strong first year plants bulk up each succeeding year. In my second year I have not chosen to divide them.
I overwintered the dormant tubers last Winter, still in their pots almost unwatered in my unheated greenhouse.
I think I was lucky as it was a very mild Winter! I have written before how I lost tender plants in containers in the 2010 Winter when for example agapanthus survived outside in the ground when those in the unheated greenhouse died. I am confident that my tender zantedeschias would survive in the greenhouse in a normal winter but in fear of a harsh one I will this year overwinter the tubs in my almost frost free garage.

My niece Gail recently admired my coloured callas and reminded me that they were her wedding decoration too. 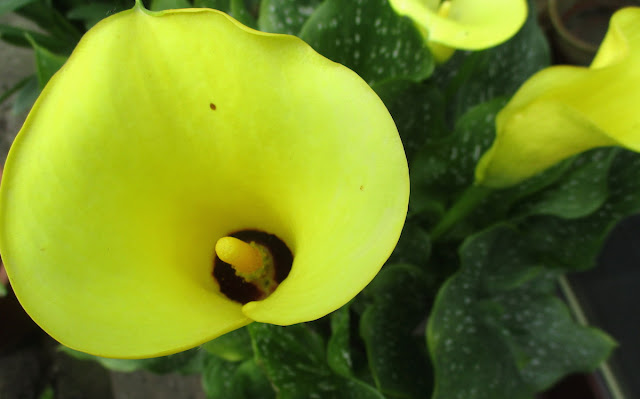 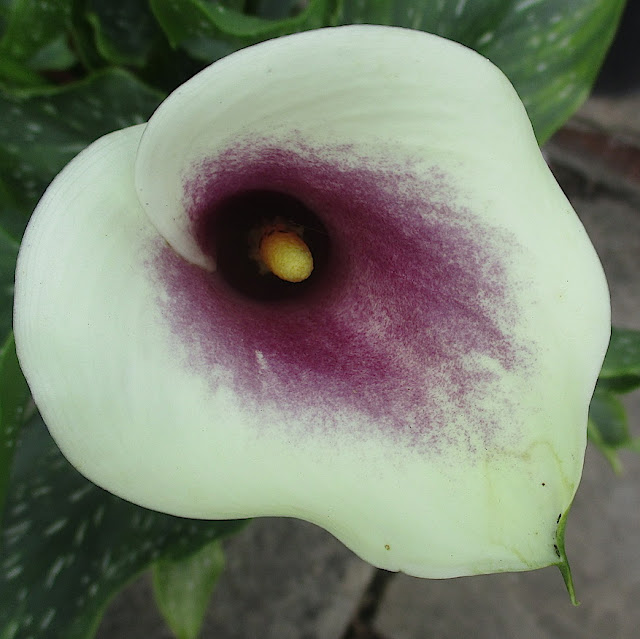