Although agapanthus has a reputation for being ‘difficult’ in the North of England, here in York the deciduous types thrive. I have grown large clumps for the last forty years. On different soils in Barnsley, Bolton Percy and York they have proved  completely hardy. I had a slight hiccough in the double winter of 2010 when in January we had 18 degrees centigrade of frost for many days in the worst winter for fifty years. The cold was later exceeded in the Winter that started in December of the same year! A few of my agapanthus in exposed positions did receive a setback but all but one survived.

Unfortunately this was not true of my agapanthus in pots. We all learnt a hard lesson in 2010 when a number of less-hardy plants in pots failed to survive in unheated greenhouses, yet in the open ground they came through. The problem was that in containers roots are more exposed to intense cold. The cold was so prolonged that inside unheated greenhouses it was just as cold as outside.That year I lost all of my potted agapanthus. Fortunately I had plenty of new stock in the ground. 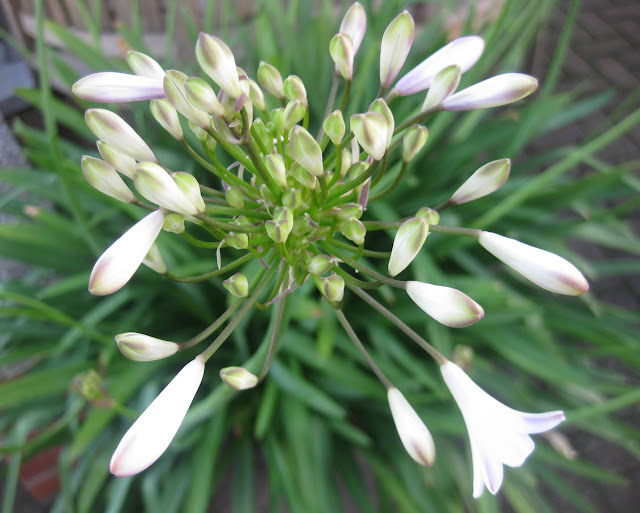 Agapanthus propagation
My large drifts of agapanthus have come at very little cost. For some years my original stock, either from seed or divisions from gardening friends, were re-propagated each year. An existing clump would have a chunk chopped out with a sharp spade. Sometimes each chunk would be chopped in two. I would do this either in autumn when they started to die down or in spring when they started to sprout. I would even divide them in winter if I could find the dormant roots! After one year a single clump would become three. After another year I would have six plants. The next year nine! Eccentric or what? I write this with somewhat rose coloured spectacles, I would never quite achieve such a perfect mathematical progression, but you get the idea. I am very patient! Had I carried on much longer my cemetery gardens would now be completely blue! I do find that inexperienced gardeners are scared to treat their plants so brutally. They should not be scared.

It is even possible to propagate agapanthus in summer. These pictures show ‘proof of principle’ and are not a general recommendation unless you are moving house or want to urgently give some plants to a friend. I currently have a planting project in Cathi’s garden next door and now in mid August have transferred two very large clumps of agapanthus over the hedge to her garden.

They are tolerant of a wide range of soils. I find they will grow almost anywhere if they have good light. Clumps need space to themselves and must not be crowded by other herbaceous plants or weeds and should not be heavily shaded by trees. I find that agapanthus are tolerant of poor drainage. I see pictures on the net of them growing in ditches in New Zealand. Tender plants are often more victim to winter cold if the soil is not well drained so I do not suggest in our climate you go so far as growing them in a bog! A soil that is water retentive yet well drained is ideal. 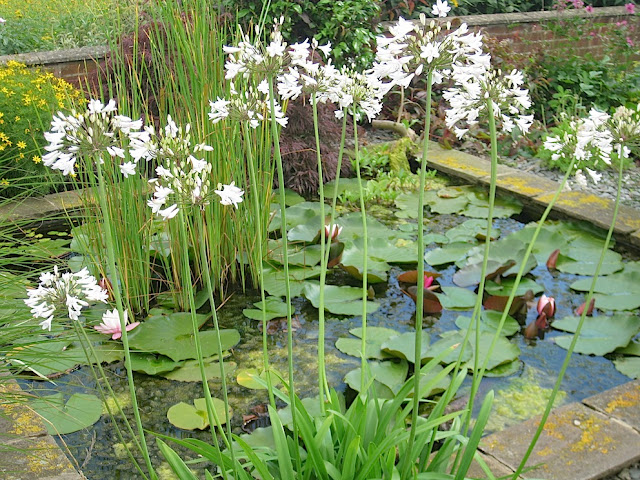 I do not stake my agapanthus, but should perhaps mention that I rarely support any herbaceous plants. If a few agapanthus infloresenses spread out a little or even droop gently across the lawn it might even add to their attraction! I would rather cut away a few horizontal flowers and put them in a vase than stake. There are so many flowers I can spare a few, they are so prolific.
Don’t let anyone tell you that they flower better in pots. They don’t.

For impressive displays use large pots, not fiddly small ones. My own tubs are about 40 cm in diameter. They were originally planted with strong plants from the open ground. They are in good soil fortified with fertilizer. I top-dress at least  three times a year with my NPK granular fertilizer. It is essential to use fertilizer for the long term culture of plants in tubs where leaching conditions invariably prevail. Many gardeners choose to provide these extra nutrients with a liquid feed.
Every gardener knows that letting agapanthus be crowded in their pots promotes flowering. Personally I don’t believe it and find that my strong plants potted up from the ground  usually flower even in their first season. Undoubtedly agapanthus are capable of flowering prolifically when crowded in their pots but I would argue that they also do so in open ground where there is no root restriction.

I think what makes them flower well in pots is good nutrition, a light open position and skilled watering. Give them plenty of water when they need it. Knowing when to water a plant is a hugely significant and rare gardening skill. In hot windy weather generous watering might be as often as every day. In dull wet weather it might be as little as once a week. Some gardeners make the mistake of thinking that because it has rained their tubs do not need watering at all! 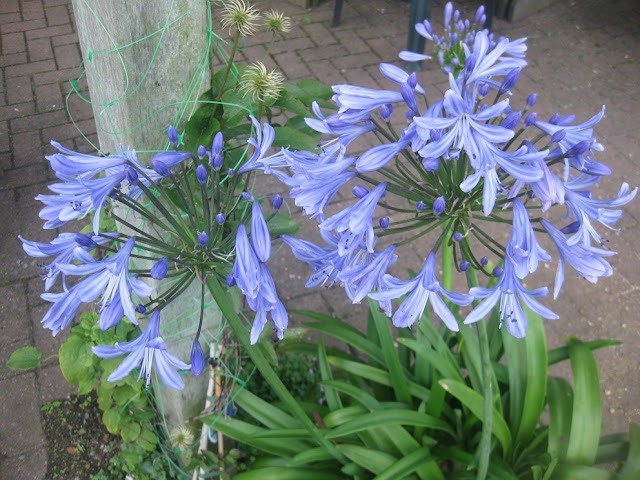 These are even more magnificent than the deciduous types. Other than being significantly less hardy than deciduous varieties the information above is relevant to their culture. They are not sufficiently hardy in my region for overwintering in the open ground. Grow them in tubs which from the end of December to late March can be shifted to a protected and almost frost free place. In a normal winter an unheated greenhouse gives sufficient protection. Since my unfortunate experience in 2010 I have overwintered mine in my almost frost free garage. It does have two large double glazed windows and my plants are not in the dark! Even the shelter outside of an adjacent building or under an evergreen tree might be sufficient winter protection.In such circumstances be very alert in an extremely cold spell to bring them inside!

On our levada walk in Madeira in January this year loose white evergreen agapanthus roots were for sale at a wayside table. I potted up the rather chlorotic pieces and placed them in my frost free porch when we returned home.

2018 addition They flowered magnificently and continue to thrive


Visiting party
Last week a visiting party of gardeners from Flaxton visited my garden. They generally marvelled at the quality and quantity of my agapanthus. Good for my ego. They almost unanimously  thought that agapanthus are difficult to grow. I don’t know why. Perhaps they have been trying some delicate fancy varieties. Perhaps Flaxton soils are very heavy clay and because of poor management and too much digging are not very well drained. Horror of horror perhaps they dig over their borders in autumn and chop up those lovely fleshy white roots! Perhaps they have bought small delicate plants grown soft in a tunnel or stood too long on a garden centre bench? Perhaps they have planted an evergreen type outside? Sometimes it might help with small plants to overwinter them for their first winter in a greenhouse.
None of them could bring themselves to chop up agapanthus with a sharp spade! 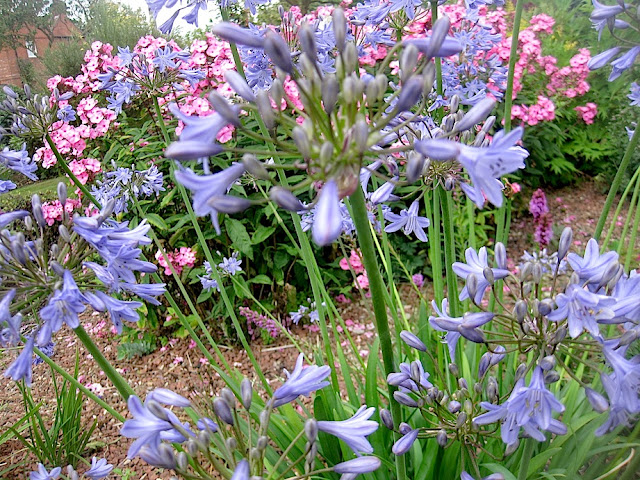 I just do not understand it, agapanthus are so easy
Posted by Roger Brook - No Dig Gardener at 14:53