The epilobiums are the main problem
If you have come here via a search engine looking for how to control willow herb you are a probably a good gardener. I take it that all regular readers are too! When you have mastered most of the common weeds in your garden epilobiums remain! Couch, ground elder, marestail and hairy bitter cress might all be things of the past for you but epilobiums keep coming back. It’s a good illustration of how nature abhors a vacuum and when one plant goes another takes over.
It’s a little ingenuous of me putting rosebay willow herb, Chamerion angustifolia, in the title to attract your attention! That’s the name that most gardeners wrongly call their epilobiums. It is true that rosebay bay willow herb can be a problem but in the right place it is really rather pretty and can enhance landscapes and roadside verges. If you search on the net you will find places to actually buy it, especially the lovely white one.

These are the two main culprits 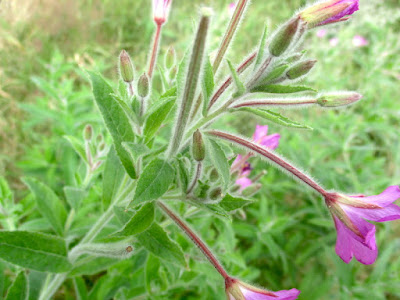 The good news is that epilobiums are rather pretty. The bad news is that if you stop pulling them out they will completely take over. To me it is a thorough nuisance and more than fifty per cent of my weed control time is taken up by it. More bad news is that this post might do little to help you!  We can commiserate together.

As a weed it spans the two normally distinct problems ‘weeds-from-seed’ (wrongly dubbed ‘annual weeds’) and weeds that are existing perennial structures. It is both! It blows in from seed and if left alone survives as a ‘short lived perennial’ Worse if you let them seed they remain evermore. If by dint of much effort you control them they fly back next year from ‘dirty neighbours’. When the village plot flooded last year it even came in by water!

It is so sneaky! It is able to hide itself in your most vigorous dark herbaceous or woody clumps and July to October suddenly appears from ‘nowhere’! It has of course been there all the time but after each new day of pulling them out you find several more! Even after my recent Open day when the garden had meticulous attention I pulled out another half dozen the very day after!

As a weed it knows every trick in the book. Evolved alongside agriculture it has benefited from natural selection for thousands of years. It loves the disturbed soil created by man and has 'learned' to combat most of the farmers' and gardener's wiles.

Perfectly hardy young seedlings, even ever-so-small ones, lurk over-winter waiting for Spring. Larger seedlings germinated in late Summer, Autumn, and early Winter make a tight ground hugging rosette ready to sprout in late Spring and Summer. Depending on conditions in Summer it will flower and set seed at three inches to four foot high.
It gives a curious satisfaction to easily yank out a flowering epilobium. You can do so with a tight and gentle pull from close to the ground. Beware a careless break as it regenerates a tight cluster of several new shoots to either flower or if late in the season await the next year.

If undisturbed in an adjacent paddock it is truly perennial and sets seeds strongly in August and September. The air born seeds fall like snow on your garden.

As an overwintering small plant it is resistant to normal strength glyphosate. It took me years to appreciate that I was spraying the same tight rosette several times!

In dry Summer even when other plants are wilting epilobium never seems short of water. On the other hand it loves bogs and water and will thrive at the edge of your pond.

Its trick of appearing from the dark middle of your plant clumps in Summer is fuelled by stored energy reserves that enable it to rapidly reach for the light and to expose its flowers and seeds. It builds up its strength when your herbaceous plants have died down or your shrubs have shed their leaves. Those green ground hugging epilobium leaf clusters continue to photosynthesize and build up their strength right through the Winter.  Even under evergreens with the sun low in the Winter sky, light reaches the darkest corners to sustain it!
Control of epilobium
Hand weeding
If it intimately infiltrates your borders you just pull it out. Ever vigilant you might check every day! If not yet flowering just cast the dead top on the ground to wilt and die and return to the soil it's due.
If flowering and ready to set seed I ought to advice you to take it away. In practice mine just gets thrown on my lawn to be later shredded by the mower. Any seed has no chance in my lawn!
Hoeing
You have several months to hoe the rosettes through Autumn, Winter and Spring.
If it is windy and dry they soon shrivel and die. Unfortunately in Winter the weather usually does not comply!
The technique of hoeing is slightly different to that recommended in my recent post on hoeing when you attempt to cut a weed from seed at exactly ground level. In this case you need to undercut the weed perhaps a quarter an inch down. This is necessary to detach all the perennial parts but with the consequence that it might root again! In Winter when it is cold I find re-rooting happens only very slowly and normally with luck you will get a spell of windy weather – even a few weeks later - that will kill it and all the goodness can then return to the ground. If you are tidy minded just rake it off  but do not denude your garden of organic matter by throwing it in the bin!
I have been known armed with a hoe to go out on an epilobium hunt in Winter and detach my epilobium rosettes all over my acre garden. I might on that occasion ignore any other weed but as I have mentioned at that time I have very few.

Spraying
Most gardeners do not spray glyphosate in their own borders as I do. Many of my posts suggest how you might do so and one post particularly recommends the merit of spraying in Winter when many perennials are dormant. Even if this is more than you dare many gardens have open spaces that are very easy to spray. Unfortunately as mentioned in the middle of Winter epilobiums are pretty resistant unless glyphosate is applied at perhaps one in forty dilution of commercial 360gm per liter product. I often prefer to use MCPA that I buy as Agritox. Note neither of these products are to be found at your local garden center.
MCPA is an ingredient of lawn weedkiller and is not suitable between delicate plants. In my own case in the large spaces of Worsbrough cemetery where huge drifts of epilobium blow in every year and it is almost my only weed I use MCPA most of the time!
The good news is that when young epilobiums are growing strongly when it is warmer in Summer, glyphosate at 1 in 50 dilution will completely kill them. Unfortunately if they are already in flower it will be too late to stop them seeding before they die! There are many months in Spring and early Summer when glyphosate works very well!
The only good thing about epilobiums is that you have nine months of the year to control the tight leafy rosettes when ignorant observers take them to be garden plants!
Please note glyphosate spraying  is completely impractical  when epilobium is flowering in the middle of your plants. Just pull them out! When epilobiums are setting seed it is too late to spray.

Chamerion is a different kettle of fish to epilobium! Just as invasive as epilobium when it comes in with flurries of air born seed it is distinctly more perennial and as a perennial plant much more aggressive. Large clumps can cover the ground and survive for forty years. Probably much more if anyone had bothered to record them.
Acutely attuned to vacant derelict sites it is famously invasive of stony neglected areas. One of its names ‘bomb site lily’ says it all.

In actual gardening practice I personally find rosebay willow herb no problem at all! Although it does spread in from seed, unlike epilobium  it does not seem to establish all year round.
Your problem may very well be that rosebay willow herb has been standing many years on a site you wish to reclaim. If you use glyphosate it is easy and you will be rid of it in a single season.

Regular readers please bear with me if I repeat the rules for eliminating well established perennial weeds.

* Do not try to dig them out! Chopping the roots creates thousands of new propagules.
* Let the weed make plenty of top.  For the first application spray close to its mature size. It might be the end of May for maximum glyphosate absorption. It is useless zapping new shoots as they emerge.
* If you can obtain 360 gm/litre commercial glyphosate – it comes under many trade names as it is now out of patent – use it at about 1 in fifty dilution and thoroughly wet the leaves short of ‘run off’’.
* Several weeks later respray shoots you might have missed and any weed regeneration. They should be strong and green. Its pretty useless repeat spraying old half dead yellow and brown stubble.
* You might need to re spray two or three times to eliminate  a previously strong stand of rosebay willow herb.

Bits and bats
Most historical references to rose bay willow herb suggest it came to the fore in the UK in about 1850. Before that it was a rare shy woodland fringe plant. I find this difficult to believe when you consider most of Europe shares this now virulent weed. There must have been plenty of genetic diversity to be shared if plants hybridised together! One reference I found says in the US their plants have twice as many genes. Scientists recognize that ‘ploidy’ occurs in this genus.
Rosebay’s historical thuggish emergence is sometimes described as a ‘genetic mystery’. I suspect no one has really tried to find out. 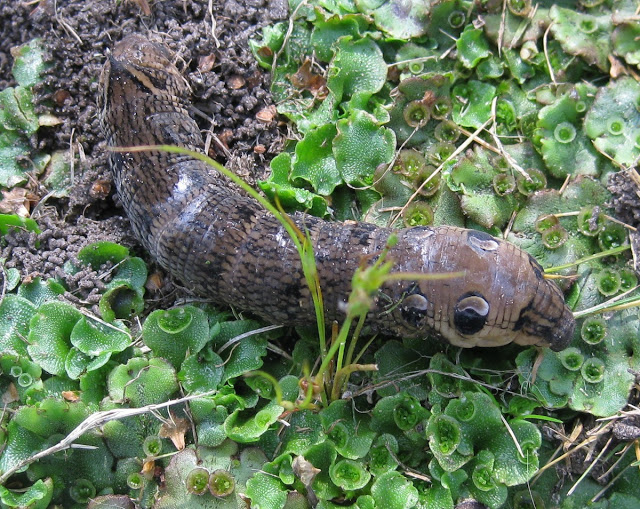 Rosebay willow herb is a beautiful plant. It is also host to magnificent hawk moths.
I allow a few plants in Worsbrough cemetery where it looks rather nice. When I started there were masses holding their own against the acre of brambles! The willow herb was much easier to eliminate.

When I took early retirement and became a freelance garden trouble shooter, plants lady, nurseryman and Chelsea winning flower arranger Jacky Barber hired me to do specialist jobs in her garden. My first task was to spray out weed in her overgrown herbaceous borders. There were masses of rosebay willow herb that I diligently sprayed. Jacky later informed me it was the white one that she treasured! She knew of course that one spraying would merely reduce it to manageable proportions.


She did not sack me! There are not many garden labourers who can eliminate well established perennial weed amongst herbaceous plants! Jacky is now a very dear friend!
Posted by Roger Brook - No Dig Gardener at 12:09