The changing ecology of a garden

How my cemetery gardens have changed over the decades

Everyone knows that grassland or herbaceous/scrub vegetation if completely left to nature returns to trees in an ecological succession. A complete return to woodland will take many generations.

Gardens usually remain relatively stable as a result of a gardener’s constant attention. In my cemetery gardens I garden naturalistically. Although I ‘manage’ the gardens, plants and seed spread everywhere and my control is ill defined. I want today to look back to how the gardens have changed.

Many gardeners experience a garden’s ability to return to trees. Seedlings such as sycamores, birch and ash are examples of our more difficult weeds! You will have your own personal examples. 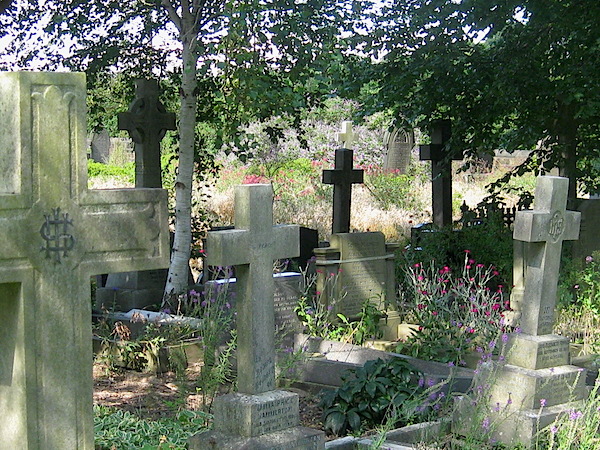 Often a tree seedling might be unnoticed or even permitted because it looks rather nice. Woe if a householder moves and the new tenant thinks it to have been planted. After a couple of decades he has a huge forest tree!
In my cemetery gardens I normally try to kill unwanted tree seedlings. In some cases I have ‘allowed’ some to grow, particularly birch. Many have made very fine specimens. Over the years I have pruned such birch to ‘crown lift’ them to make lovely features. Eventually at their finest I usually chop them down! I do not dare to let them bigger.

In the days when press and television beat a pathway to my door when Bolton Percy churchyard was famous I was always pictured looking intensely at a birch tree. Better than my profile!
My chopped down birch usually sprouted to make new multi-stemmed trees to continue the cycle!
I have to admit that at Worsbrough cemetery seedling holly and yew are a considerable problem. They insidiously sow themselves in any spaces and in the case of holly are adept at arising under plant and shrub cover. I suddenly find very large saplings where they are not very welcome.

Several years ago I took time out to dig up more than a hundred yew seedlings and take them home to give to Peter Williams. He now has a very fine hedge.

When I had my own clients I worked at a large garden. Unfortunately I never saw my ‘difficult’ employer but liaised with his wife. I had a ‘vision’ for a section of the garden and diligently sprayed out tree seedlings including yew.
I learned several years later that the owner was dismayed that his yew seedlings never grew! In due course I resigned.

Most landscapes are guided by man. Unfortunately disruption is often intermittent, misguided, undirected  and unskilled. Particularly so in relation to weeds. Natural ecological progression is repeatedly stilted.
It is then that weeds such as Hymalayan balsam take over. Banning them by knee jerk legislation does not make a h’penny-worth of difference! Nor muttering about aliens - our own native bramble is far more invasive.

Left to real nature or even to sensible farming or skilled unfettered ecological management such weeds would never survive.

Japanese knotweed has evolved to grow alongside fumeroles at the edge of volcanoes. No wonder when they have years of opportunity to build huge botanical structures in disturbed soils that have been stripped of shrubs and trees they take over.

I have written before about how I used glyphosate to eliminate a quarter acre of an eight foot high thicket of Japanese knotweed in Worsbrough cemetery. It was growing in cleared but neglected land surrounded by trees. It is a moot point that if the trees had been allowed to grow it would have got going at all. It is also doubtful  that if the surrounding trees were allowed to grow over and cover the site how long the knotweed would have survived. Perhaps fifty years?

I read that where Japanese knotweed was cleared at eighty million-odd pounds cost on the Olympic site that in places it is starting to regrow! Have they not heard of glyphosate? Japanese knotweed only regrows if it is allowed to.
What a pity if with advance planning four or five years earlier with the use of glyphosate clearing weed would have cost a mere million pound. 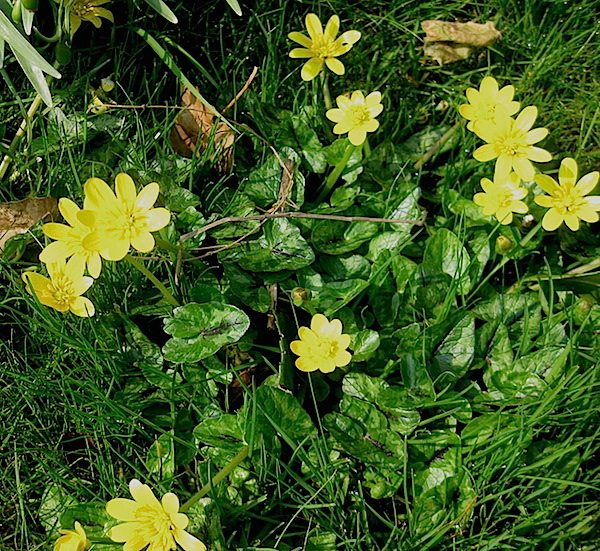 In the early Spring of the year after I started to spray off the coarse perennial weeds in Bolton Percy cemetery a lovely golden carpet of lesser celandine Ficaria verna appeared. Eventual complete transformation of the overgrown wilderness, itself an example of 'disturbed' landscape would take a decade!
It was a superb complete golden carpet and in the early years became a backcloth for lovely primroses and other Spring flowers that self seeded around. The primroses themselves most have been vestiges of seed suppressed by a fifty year cover of nettles and brambles and horse radish and things!
I have an old acetate slide. - somewhere - of this beautiful scene with which I used  to open my cemetery lecture for several decades!
The celandine kept returning each early March for nye on forty years!
It is a wonderful well behaved plant. You might not agree but for me it provided six weeks of golden colour suddenly halted in late April when within a matter of days it disappeared for the year. The uninformed might have thought I had sprayed it off with my glyphosate. Not so, never - I loved it too much.
Back home celandine seeded over my rock garden and most of my lawn! My wife hated it and constantly chastised me! Good cemetery plants are not necessarily good for the garden.

In the early years I showed round a party led by a botanist from the National Society of Conservation of Garden Plants, the NCCPG  (phew). Now rebranded as Plant Heritage they were holding a Northern Conference. Later the visit was reported in their National Journal which described the superb golden carpet of aconites. Somewhat up market from celandine. Even today Winter aconites refuse to naturalise for me – anywhere.

The relevance to my story of changing landscape is that four years ago my celandine failed to reappear in Spring!
My own best analysis of what might have happened is this. Over the years local birds and wild animals had started to graze nutritious celandine and had started to make it a principle item in their menu. We had two very dry Springs. The second Spring dry winds persisted through February and March. The normal luxuriant celandine growth was suppressed. With little cover to protect them the celandine were eaten to death.
We have now had a lovely wet warm Spring but they have not returned. Just a few huddle away under covering shrubs!
I suspect I won't be around long enough to see that carpet again.

Changing times
Both my cemetery gardens are a kind of controlled ecologies where vagaries of season, changing conditions and circumstances create new plant alliances from year to year. It is interesting how some plants have dominated yet later have been suppressed or disappeared.

The biggest management change by far was when we moved away from Bolton Percy sixteen years ago and my intimate and regular attention which included a wide range of methods of weed control was replaced by mere glyphosate spraying. Glyphosate was always the thing that created the garden and made it possible for me to manage an acre in two hours a week but now a quick spray-round once a month was all I could manage. I started to introduce strong herbaceous clumps that I could easily spray round.
I sometimes meet visitors who imagine Bolton Percy cemetery cemetery has maintained itself without human intervention for the last sixteen years! 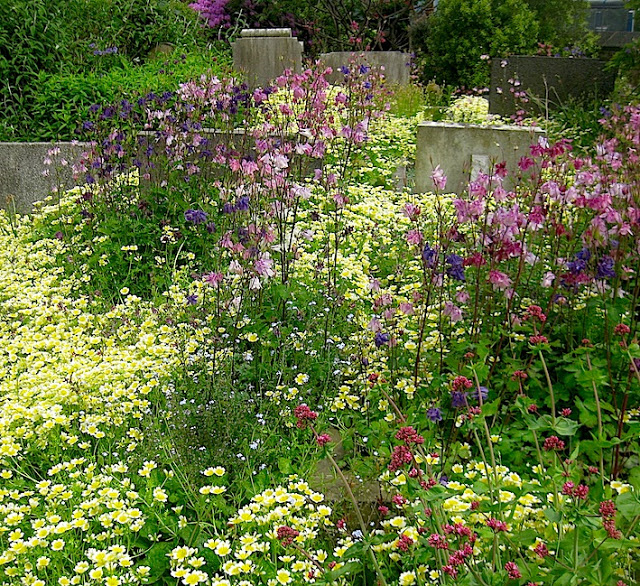 Most gardeners have joked how some people take years for the poached egg plant, limnanthes to get going in their gardens whilst others can barely get rid of it. I thrives everywhere in Worsbrough cemetery and yet previous strong repeatedly seeding limnanthes patches have now started to really struggle at Bolton Percy.

I have had years when certain plants totally dominated  Bolton Percy cemetery. Montia sibirica (claytonia) once made a complete pink carpet and we would sell it with a health warning on an Open day. Now, you can barely find any. It is wonderful plant if you have very shady places.
Similarly I have a old acetate picture of the cemetery white as snow with Viola cornuta alba. Where is the viola now? Well actually taking over at home where it loves my sandy soil.

I think it might be too much for today to suggest that many of the explanations of changing plant dominance lies in the mathematics! Perhaps another time.

The future
For forty years at Bolton Percy, twenty years at Worsbrough I have influenced the garden ecology. I have retrieved the cemeteries from the nettles and brambles.  Their development has been random and changing.
Approaching 75, although fit and healthy I will not be able to go on much longer. Bolton Percy is secure as a garden for several years to come now that I have help from the volunteer C –team!
I have informed Worsbrough I will finish at the end of 2017. I do hope they find a way to continue.

Links to relevant posts
Peter Williams wrote about how in his dotage he would watch his own garden returning to nature. To an ecologist it will be very revealing
The saga of the Worsbrough fisherman
How I controlled Japanese knotweed
My liking for the poached egg plant