Epigenetics in the Garden 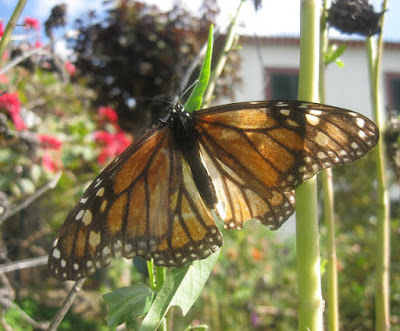 Epigenetic's can claim to be the biggest biological advance in the last twenty years and new implications in plant and animal biology become apparent every day. Scarcely anything that happens to the plants and organisms in our garden is not epigenetically controlled.

I am indebted to Nessa Carey’s fine exposition in her book ‘The Epigenetics Revolution’. It becomes heavy going as you turn later pages but never have I read such clear explanations.

In simple terms epigenetics is about how and when genes impart their information. In a sense the term ‘gene’ is too crude a term in reading DNA. When the human genome was first fully encoded scientists were amazed that gene numbers barely reached twenty five thousand. This is slightly less than a rice plant and a small fraction of paris, the woodland weed! (The latter being as yet the biggest genome that has so far been counted).

The really significant numbers are that in humans, for example, we are coded by about three billion base pairs of genetic code. The number of cells in our body are measured in trillions. Every single one of these cells is shaped and performs under epigenetic influence.

Every cell in our body contains a complete set of the genetic code in our genome and yet most of the code is not expressed in the individual cell. The code is not turned on. For example the information specific to making a liver cell is not turned on in a skin one!
A dramatic illustration of epigenetics in action is the development of a new embryo in the womb. The first divisions from a human embryo are undifferentiated  and potentially can divide to create any human cell. Once epigenetically tagged their divisional destination might be for ever predetermined. A primordial skin cell might only ever divide to produce skin. Some cells such as neurones once laid down might never divide again and yet serve us for the rest of our life.
Some cells are more versatile and may permit change. A great challenge in this new science is to discover cells that retain their versatility and to explore ways of returning certain cells to the undifferentiated state. Already significant advances have been made. To replace our body’s damaged cells by generating new ones is for certain medical conditions a holy grail.
Reading the script
A genome might be regarded as a script rather than recipe. It is reassembled from one sexual generation to another as male and female components combine but essentially it retains the same structure. In asexual reproduction it barely changes at all. The actual genome script is, at the present level of understanding, not changed at all by epigenetic action. What does change is its interpretation.
‘Genes’ are epigenetically turned off or on by a process of tagging. You may have read about temporary methyl, ethyl and histone attachments to the genetic machinery. The presence of a tag might mean genetic code is switched on or off - or some partial combination. Some tags remain a lifetime or longer, some tags are ephemeral. In the life of a cell some tags might be on or off like a yo yo.
An aspect of epigenetics that has caught the public imaginations is that in some cases the modified action of genes by the process of tagging can be passed on from one generation to the next. Has Lamarck’s theory of the inheritance of acquired characteristics been reinstated as a source of genetic diversity? Seemingly not, but long term epigenetic change is not without significance.
Normally at birth a new germ cell’s tagging is wiped clean. We now know in some cases this does not happen and the environmental influences on one generation are passed on to the next and in some cases beyond.

What initiates tagging?
Significantly the environment. The environment in the womb, the environment within the body and the effects of the surrounding world.
In truth almost anything might drive the process of tagging. All the cells of the body working together constantly effect one another. The action of pathogens, symbiotic entities, physical damage to cells, pheromone signals from afar are all included.

Relevance to the gardener
I have intended setting down a few thoughts about epigenetics in gardening for some time and reading Nessa Carey has emboldened me to to do so.

I need to explain that many plant cells retain pluripotency (the ability to differentiate into any new cell) throughout the plant’s life. Pluripotent cells occur in the primary meristems at the shoot and root tips and in the secondary meristems such as cambium. These cells as well as reproducing themselves in their undifferentiated form can differentiate into any plant part. Plants unlike most animals can completely renew themselves - either as  extension growth or when detached as new entities. We gardeners call the latter vegetative propagation. Even simple cells like parenchyma can become pluripotent.
Scientists exploit the regenerative abilities of plant cells in meristem culture.

Certain differentiated cells in a simple plant stem are able to generate root cells when we take stem cuttings. On the other hand there are fewer examples of plant root cells having the ability to produce stems. Some of the exceptions can be quite a nuisance when they appear as suckers! Such roots with the capacity for pluripotent action are the basis for root cuttings.

Gardeners and ecologists have been reading for some time about research showing plant genes been turned on or off. Not infrequently we read how plants from a distance warn their neighbours with pheromone signals of the presence of a parasite or predators. Supplied with this information a plant mounts it defence - as diverse as producing distasteful tannins, growing more spines, producing natural toxins or even sending out its own signals to beneficial predatory insects.
All these defences come at a cost to the plant’s resources and being epigenetically ‘switched off’ when not needed is part of a plant’s good housekeeping.

I sometimes get irritated about researchers pontificating about the significance of genes being working or not. I have previously indicated my irritation when two years ago researchers on biochar demonstrated significant growth improvements by using biochar as a growing media and yet damned this material by reporting the plant genes that fight pathogens were switched off. I suggest you might expect them to be switched off if the plant was thriving without them.
In actual practice plants grown in the field using biochar and indeed in historic terra preta produces very healthy plants indeed.

Phenotypes
Scientists recognise that a single genome can in different environments  produce different ‘phenotypes’. (A phenotype can be recognised on the basis of an organism’s external features). In animals different phenotypes produced from the same genome might be as different as a caterpillar and butterfly or as ephemeral as the colour of a fur coat in the Winter.

Different phenotypes of genetically identical plants is not uncommon and are epigenetically controlled. Certain aquatics look very different if growing on dry land rather than in water.
Plant leaves on the same plant vary in shape, size and chloroplast density dependant on whether grown in full light or shade or varying temperature. Its all epigenetic.

Varying phenotypes are a characteristic of juvenility. A young beech tree retains its leaves in Winter whilst an old one doesn’t unless it has been kept young by clipping. Brenda’s son did not recognise the flowering ivy in his new garden. It looks so different to the juvenile kind.
Some conifers permanently retain their juvenile phase and this is a source of dwarf forms.

I wrote recently about hard and soft growth. Surely this is epigenetically controlled?

A well researched epigenetic phenomenon is a plant’s response to cold in relation to flowering and the timing of seed germination. Vernalisation (preparing for Spring) controls for example a plant cell’s ability to differentiate flowers. Scientists have identified how genetic tags control this phenomenon. Extreme in its sophistication it combines classic epigenetic phenomenon such as  environmental stimulus, delayed timing, long lasting action and at the end of a season ‘scrubbing’ tags clean.

In animal studies there is great interest in developing profitable pharmaceuticals that encode epigenetic actions. I wonder if ever there will be chemicals sold to promote flowering?  At least that might stifle the garden pundit’s feeble resource of suggesting you give your none flowering plants a dose of potassium!

Another remarkable example of phenotypically distinct organisms that share exactly the same genome is the thousands of worker bees and their very few sisters that become queens.
Widely researched their epigenetic story is now almost unravelled.
The ruling queen after several fertilisations by drones on her maiden flight settles down to a sedentary existence of as long as eighteen months and in that time lays tens of thousands of eggs. Thousands of females will be genetically identical (Not all the bees, distinct fertilisations will give rise to different clones and the very few males have their own special duty).

The epigenetic destiny of sisters is controlled by their nutrition. For the first two days from hatching all females are fed with ‘Royal Jelly’. This substance is produced by specialist workers - themselves phenotypically gifted to exude this material. Future queens continue to be fed Royal Jelly for the rest of their life.
The content of this material is a complex rich mixture and contains epigenetically active components. Crucial genetic elements in the growth processes have now been elucidated, methylation enzymes have been identified and it interesting to note that to become a queen a specific gene is turned off.

Apparently in bees there is another well examined example of epigenetic activity that involves a worker’s memory of food sources classically communicated in the famed ‘waggle dance’. Not only does it need to remember it needs to forget a previous site. It’s all in the tagging.

Brave New World
New Scientist last month reported in a major feature that there were huge developments in plant epigenetics just round the corner. Many of the developments will relate to yield and pest and disease control in Agriculture. What comes to farming gets passed on to horticulture and one day we might see at the garden centre epigenetic products that change the colours of flowers.
Much of the epigenetic action in potential farming products revolves around a switching mechanism that involves RNA interference. Like all the above examples there are no permanent changes to the genome.

I get precious about my biochar

Buy 'The Epigenetics Revolution'
Posted by Roger Brook - No Dig Gardener at 09:58