The advantages of mulching

Much ado about mulching 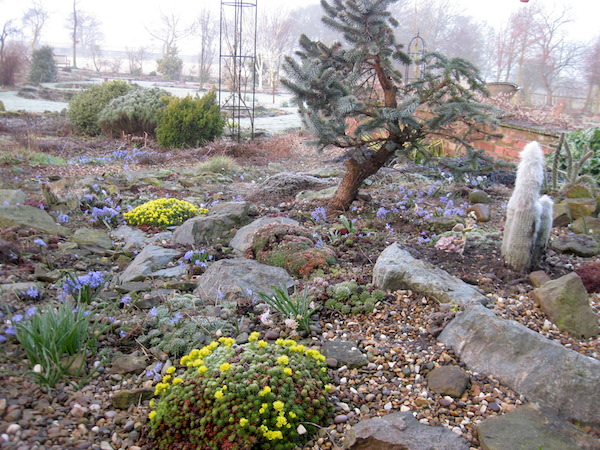 Mulch is a thin cover on the soil surface. Mulch gets thin cover in the horticultural press too. Reporting is very shallow.
You probably know that mulching makes plants grow better, conserves water, looks good, insulates the soil and can suppress weed. You might add that it protects the soil from erosion in heavy rain and keeps the mud splashes off the strawberries.
For many gardeners that is sufficient but you won’t get away with so little today. As is my wont, I want to dig deeper!
Except I don’t dig. A  perceptive student once inquired why as I am so keen on minimum cultivation I don’t just put a mulch on top of the soil and get a cavalcade of further advantages. He was right of course, it was a very shrewd insight. Although I have often rather snidely declared that the main advantage of mulching is to prevent the over enthusiastic gardener disturbing the soil it might actually be true.
As I so often promote the benefits of none cultivation I will spare you that today!

Mulching materials
The actual properties and gardening merits vary with the material. The very best for water conservation are gravel and stones. Include in this list larger rocks and un-cemented paving. How often do you hear that clematis likes a ‘cool root run’ under stones. Partially true. The active principle is that loose stones and gravel do not intercept water and even light rain nearly all penetrates through. Like most mulches, as intended, they do reduce direct evaporation from the surface. Permeable plastics and substances such as polythene add to the list of good water conservers.

Mulches are usually fairly long lasting surface materials although those such as bark and wood shreddings need topping up every few years as they slowly degrade. Discuss with the rabbits and moles the permanence of stone chippings.


We also use the term mulching to include surface organic materials such as farmyard manure and garden compost. In actual fact these materials are usually intended to be incorporated by the worms and only remain at the surface for a while. Manure mulched rose beds annually topped up might last the whole year. Lawn mowings and Autumn leaves are perhaps a half way house in this crude classification. Mulching as a very effective means of adding organic matter is not really my subject today.

Weed control
Other than plastics, mulching against existing established perennial weed is almost useless. The weeds will love the mulch as much as the plants. We will say nothing about gardener’s attempts to smother perennials with newspaper and cardboard!
Against weeds coming from seed mulch’s measure of control is really quite useful. It seems to be generally agreed that mulches need to be about two inches thick to stop weed seed germinating. This cover will be enough to suppress light levels at the soil surface to inhibit germination and enough to prevent emergence of small seeds. It won’t help very much with seed that blows onto the surface or is shed in situ (shame on you).
In my own case the thinness of my wallet reduces the thickness of my mulch. My weeds are well enough controlled by my glyphosate spraying and I actually want many of my garden plant to sow themselves around. (This is why my mulches never overlay plastic - I want my garden plants to self seed).

People tell me that weeds that do sow themselves in mulch pull out very easily!
This year I newly mulched a large part of my borders with bark. This was to pacify Brenda who can’t stand the liverwort!
The freshened up borders looked very nice.

An insulating layer. Be careful what you wish for
In general a mulch’s insulation might be thought to be a good thing if it keeps soil warm in Winter and cool in Summer.
Not all mulches are insulators and plastics are only thin layers. Some colours are good heat absorbers and/or emitters. The relationship between day and night temperatures might be just as significant as those between seasons. It might for example be a difference between crop failure and success if night air above mulch is too cold and fruit blossom is frost damaged.
It is really quite complicated - what do you want? If a Winter laid mulch keeps the soil colder this might be thought to be a bad thing. On the other hand if my frost delicate Dicentra spectabilis emerges a little later I will be very pleased.
In practice in normal UK conditions I ignore potential exceptions, lay mulches at almost any time of the year and in terms of heat transfer hope they are beneficial!

Three case studies about soil temperature
*In my earlier post about gravel mulching a lady wrote in that in her tropical climate gravel got too warm in the hot Summer sun. I must say that on our subsequent holiday in Costa Rica I did not notice this effect on the weeds growing in the hotel’s gravel roads! On the other hand the dry sand on the beach was too hot to walk on. I imagine in such climates the soil is much cooler under stones and although hot for a plant to clamber over keep roots happy?

*A neglected exploitation of mulch’s insulation is putting an extra layer over dormant tender plants such as dahlias in Winter. The mulch might even be extra soil!
This year we had five months of spectacular colour of dahlias overwintered in the ground - it had been a very mild Winter. To increase my chances next year I have carefully folded over the large frost-dead tops of the dahlias and supplemented that with a layer of my miscanthus prunings and scattered amongst it mole soil from the lawn! I will remove it all in March! It does look a mess but the dahlias are worth it.

I have only limited hopes for my effort! Insulation might be successful if Winter cold comes in short sharp spells.
If we get a prolonged period of penetrating frost there will only be a very small benefit. With only a very small heat source from deep soil my mulch will be of very little value in stopping the soil freezing.
As an analogy in our extreme 2010 Winter the inside of my unheated greenhouse was as cold as outside. Your own Winter coat only keeps you warm because of the heat from your body. Blog sleuth and myth buster Robert Pavlis writes about this phenomenon when he tested soil insulating cones.

The best insulation for your dahlias is to plant them very deeply at original planting!

*When I went to see Peter he showed me the graphs he had drawn when he wrote his PhD thesis. They showed how soil surface temperatures fluctuated throughout a sunny Summer’s day. It is really quite astounding. Most mulches would dampen such fluctuations although thin plastics might increase them.

Water retention
My old Head of Department, a soil scientist, contended that mulches contributed very little to soil water conservation and I used to argue that they did.
I thought before finalising this section I would have a word with soil scientist Peter Williams and found that he was not very enthusiastic either. He emphasised that never-the less he thought mulches in the round were a very good thing.  He went on to mention that he had recently assessed the soil moisture under the mulch in his garden after heavy rain that had followed a dry period and found that very little water had penetrated through. Mulches reduce water evaporative loss from a soil surface but they sometimes intercept rain before it can penetrate in.

At that point I scrubbed my text for this section and started again!

I think a key attribute of a water conserving mulch is that it should let water pass through without soaking it up! I have long argued that none absorptive materials such as gravel and to a lesser extent coarse bark act like a one way valve for light rain that otherwise would evaporate away.

A significant thing to understand is that an un-mulched wet soil surface becomes dry very quickly in drying weather. It rapidly becomes its own mulch in terms of water retention and soil surface evaporation stops. It will start again only when the soil is re-wetted and in the case of light showers the water will be very soon gone.
Gardening books will correctly tell you that the best time to put on a new mulch is when the soil is already very wet. I put this to Peter and he explained that although the water retained by such a mulch would be a very useful equivalent of perhaps half an inch of rain that this was not very much in relation to the soil’s total available water content.
Leaving gravel and plastic aside, I think a mulch’s greatest contribution to soil water relations might be to keep the soil surface ‘in play’ in dry weather. When a dry un-mulched soil has reached the stage of ‘self mulching’ it is dry several inches down. In that zone root water absorption and such as mycorrhizal activity will temporarily shut down. Considering that the most fertile soil is usually at the surface this is not a good thing. Peter added that such dry surface soil can also get harmfully hot on a warm Summer’s day (see his graph).

Things people ask.
Do mulches such as wood chips deplete the soil of nitrogen?

One might counter with the question, how could a layer at the surface do so?
It can! Most of the decay of woody mulch is a result of fungal action. Fungus mycelium grows down into the soil to draw up nitrogen to maintain a suitable carbon/nitrogen ratio.
The good news is that the nitrogen extraction is very small and for most practical purposes can be ignored.
Not so if woody mulch is worked into the ground. If it is a problem it can be corrected by a light dressing of a nitrogen containing general fertiliser. 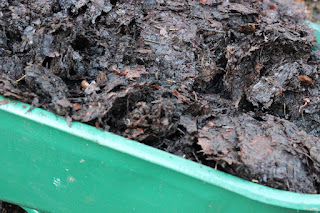 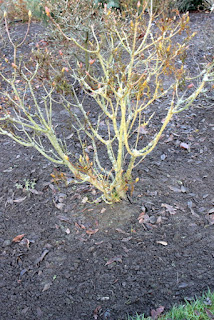 Can fresh wood chips, bark or shreddings be used without composting?

There might sometimes be slightly toxic content of fresh material that might damage very delicate plants.
In practice with my well established sturdy perennial borders if I find an arboriculturist anxious to rid himself of a lorry load of his shreddings I ask him to dump them and I use them straight away.

Is a gravel mulch suitable for herbaceous borders?

Not if your border is the kind where you are aways transplanting. I personally prefer bark for a herbaceous border

My hydrophobic soil
My previous post on mulching
Hardcore gardening