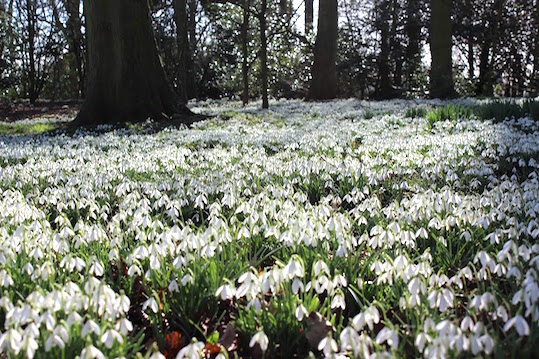 Ironic that I start writing this post sitting in Madeira.There are no snowdrops here - no cold and no snow.
The UK climate in contrast is so ideal for them that some think them native! In fact we have only had them since their introduction in 1600 and it was a hundred and fifty years later they were first recorded in the wild. How long does something have to be with us to be considered native?
Even now their presence is quite patchy. Although they are to be found in quantity in every part of the UK it seems to me that in most places their establishment has started with a gardener. In wild rural places his cottage might no longer be there.
They of course spread naturally for considerable distances. I am not really sure how far and would be delighted to hear from readers the whereabouts of isolated stands.
I would in this post like to consider snowdrop’s spread and garden establishment in some detail. Although in the right conditions they are able to seed freely I suspect much of their spread around a garden is mainly by vegetative propagation. I would be be delighted to be told of any galanthic gardens that show me to be wrong.
Soil and climate
They definitely like us.I know of no soils that are unsuitable in the UK. Some books will tell you that they don’t like very acid soil but that is not my opinion or that of Peter Williams. (Who denies that he is a galanthophile but is going that way). We both also find them to be extremely tolerant of poor drainage (but don’t plant in a bog).

Snowdrops really love cold. Apparently they are able to generate heat at their tips to push through the snow.

Where to grow them

Grow them almost anywhere in your garden. Everywhere between full light and heavy shade. Mine appear all over. They may be in borders, untidy edges, under hedges and in my lawn. Classically they love deciduous woodland with Winter moisture and sunshine through the leafless canopy. I know most unlikely corners where they thrive even when severely overgrown.
When they have completely died down by the end of March without removing them other plants can take their place. It its easier for a none digger like me. Even in a herbaceous border they might clad the ground as long as very early  herbaceous cover does not smother them. Other than the lawn I never cut back and merely let the old leaves fade away.
Their potential in lawns is often overlooked. Best as clumps in a tightly cut sward where you can for the first Spring mowings skirt round them. Wait until they are severely yellow and brown before mowing them away. Perhaps less successful is to grow them in long grass.

If they are thriving in your garden never remove them unless you wish to propagate more. There is no need for transplanting and they go from strength to strength each year.

Establishment
Vegetative establishment from bulbs is easy peasy providing they are not dry from a bulb merchant. Even then if you get your order in early they might be OK.

It is widely recognised that they are best planted ‘in the green’. What is not so widely promoted is this might be almost anytime! It may be when you can barely find them before they emerge in January, or when they actually appear, develop, flower or die down! Even when dormant in Summer and Autumn they are successful providing they go back into the ground more or less on the same day. If moving when in growth take a good root ball and disturb as little as possible.  Best in strong clumps of half dozen up to a spade-full. Fiddly separation into individual bulbs will succeed but can involve a slight check!
You might rightly protest you need stock to propagate from. It is always unfair on the new gardener! Many gardeners have existing strong clumps (or have good friends who do). If you take say a third of a clump you will never know they have gone and next year the clump will be better than ever.

The alternative is to dig into your pocket - for some varieties very deeply and buy pots from a nurseryman. Once started they will double up every year!

Varieties
There are perhaps twenty species and I found 711 cultivars in the The Plant Finder. Some are lost and are no longer available. I suspect their names have been lost rather than the plants not having survived!

We know a well known botanist who tongue in cheek says there are four kinds of snowdrops - big ones and small ones and early and late ones! Perhaps he should add they might be single and double. (For none aficionados double flowers are those with extra petals or petal-like structures).
Tell that one to galanthophiles who worry themselves silly about every fine detail. I think there is a happy medium.

Most of my own snowdrops have made rather large and varietally uniform clumps. In my cemetery gardens there are drifts of thousands which are not very diverse.
I suspect - but am not certain - that vegetative propagation tends to be more significant than seed with reference to spread.
Vegetative propagation may come about in several ways
* The bulbs just divide and push sideways ever further
* Crowded together some get pushed to the surface and out of the ground. Animals, flooding and wind do the rest to disperse them.
* Ground is disturbed by squirrelling animals and moles. Ditto above, the elements move them around
*  In the garden the over enthusiastic soil cultivator unintentionally shifts them!

Undoubtably self seeding is also significant. Every time a new seedling grows it is genetically distinct and is in effect a new variety - although for none hybrid cultivars not a new species. They appear as flimsy crook-ended thin grassy threads. They might take three years to flower. Many seeds and seedlings won’t make it due to inclement weather such as early Spring drought. Numbers will be diminished when poor pollination conditions mean no seed is set in a particular year. Some snowdrop varieties are sterile and rarely or never set seed. Young seedlings need to compete with competitive plants not least their parents. Its all bit dodgy but its part of the process.

Growing from your own seed is actually very interesting albeit not the way to build up a collection! You will often fail to find seed because the ants got there first. You might know form my previous posts I have a soft spot for myrmecochory!  Galanthus seed has shiny white elaiosomes which are tiny ant nutrient treats. In nature ants disperse them to all kinds of  places.
Snowdrop stories
* My friend Peter Williams found several snowdrop bulbs lying stressed on his soil surface. He potted them up and in Spring they produced exquisite tiny-tiny flowers. He took them to his Hardy Plant group sale with full explanation that they would be normal next year. The treasurer slapped a ten pound price on them and they flew off the table. Good for funds.
* I have not yet dared tell you about my new project establishing bulbs in Lyndi’s quarter acre field. In January I raided my own and Cathi’s garden and dug up well more than a thousand snowdrop bulbs perhaps taking 20% from some of our clumps. That was about 35 full spade fulls subdivided to make clumps of about a twenty. It took all of two hours - a long time for me. Planting of the new small clumps took another 45 minutes. They looked great when they flowered but I have a long way to go to fill a very big field.

* Years ago I read in the Grower magazine about a nurseryman who propagated his snowdrops by rotavating the ground of his snowdrop patch in Summer. I don’t suppose they were ready for sale the following season nor do I know what proportion of his stock was so treated each year.
*Before I left Madeira it occurred to me that I might have told you a porky about there being no snowdrops there. After all the island boasts numerous microclimates and a snowdrop’s cold requirement would be satisfied at altitude. We made several enquiries to knowledgable horticulturists but found none. The closest we came were snowflakes (leucojums) at Blandys and we also found daffodils in several places including our hotel garden at sea level.
Surely there must be snowdrops on the island. It only needs someone perhaps 500 metres high putting in an order to Parkers! 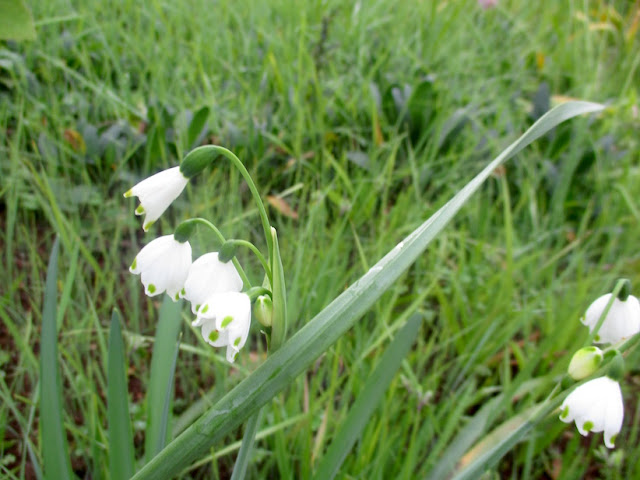 *Still thinking about altitude I read that a famous snowdrop collection in Scotland at 500 feet high flowered two weeks later than a garden at ground level This set me thinking about how high snowdrops grow in the UK. I asked Peter about 300 metre high Buxton and he told me there were plenty there! Princetown on Dartmoor is 435 metres. I wonder?
I looked up snowdrop altitudes in its natural habitats in Europe. The highest altitude recorded was 1400 metres. Why that’s higher than Snowden! But then in Southern Europe it can be very warm.
My earlier request to my readers is to provide answers to some of my questions today!
* It’s back! Last year I posted a picture of my four petal snowdrop. Unfortunately it is normal this year. However two other bulbs from the same provenance have performed instead. 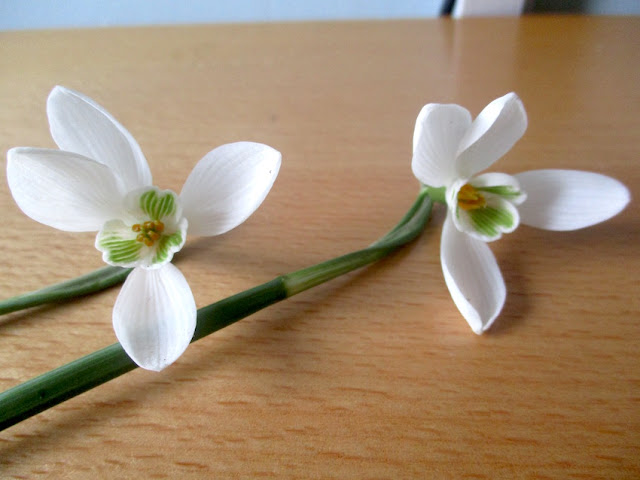