Alan Warwick’s garden secret. Will it be a Chelsea Sensation?

Alan swore me to secrecy. He had raised a brand new weeping ornamental apple tree and that ‘in a few years’ it would be launched by Hilliers at Chelsea. This is the year!

My readers already know eighty seven year old industrial chemist Alan Warwick! Former ICI boffin, he is my former student (a mature one) who when on the gardening course at Askham Bryan declared that in scientific terms the standard botanical explanation of how water gets to the top of a tall tree is complete nonsense! I don’t know if he is right but he offers his own explanation. I wrote about it last year.

Every gardener knows that it is completely stupid to try to propagate an apple by sowing a pip. Not only will a new seedling take more than a decade to fruiting, the odds are phenomenal against it being worth eating. In this case flowering.

Alan knows this but his scientific curiosity got the better of him and fifteen years ago he collected a few pips from his ornamental apple tree and raised a dozen seedlings. A few had the dark green leaves of its parent Malus aldenhamensis and he gave some away. He kept one that looked a little bit different and which after a few years clearly showed a pendulous habit. It would be years before it produced its magnificent crimson flowers. Of course anyone buying a grafted plant from Hilliers will have a flowering plant next year!

In 2014 Alan sent Hilliers a photograph. They were on the line straight away and were up in York the very next day. Alan’s weeping apple is sensational. It fills a gap in a gardener’s repertoire. There is no other weeping apple that shares its neat compact elegant nature and its fantastic dark crimson flowers. It is destined for greatness. Hillier have no doubt raised nye on a thousand. In a decade I suspect that around the world there might be nearer a million.

At propagation time Hillier’s propagators decimated his tree to collect grafting material. It has now recovered its strong weeping habit. It is a tribute to their skill that soon in 2017 plants will be on the market. Alan’s tree is of course on its own roots. The grafted plants will be just as good or even better. I predict it is going to be a garden phenomenon when it is launched at Chelsea this year'

The tree
It is a dead ringer for its magnificent parent Malus aldenhamensis - except for its superb pendulous and compact habit. It makes no more than fifteen foot high. The dense flowers are a vibrant crimson, the foliage is a fetching reddy bronze and its small long lasting dark red  autumn crab apples feed the birds.

Its mother, Malus aldenhamensis is described as ‘spreading’. ‘Crimson Cascade’ is much better and actually weeps. Quite strongly, but fortunately not so tightly as to make a tight dome sweeping the ground. It is the perfect weeper not too spreading not too dense.

Like it’s parent Crimson Cascade has a strong  constitution and unlike similar weepers such as peach and cherry it harbours only minor pest or disease. It is bone hardy and has twice experienced minus twenty centigrade for prolonged periods and not turned a hair. Alan tells me his tree has been flooded twice yet still thrives!

The naming of Malus x purpurea ‘Crimson Cascade’
Alan wanted to call it ‘Jean Warwick’ as a tribute his late wife. The ‘suits’ said “no, that won’t sell”. (This tree would sell if you called it a pig in a poke). They came up with ‘Crimson Cascade’ a very fine name. Pity there is a weeping peach with the identical moniker!

I had the same experience when helping Yorkshire author Joyce Fussy when she registered her wonderful white dicentra which was similarly launched at Chelsea - thirty years ago. I wanted to call it ‘Joyce Fussey’. Instead it was to be ‘Avalanche’. What a very fine name. On its launch at Chelsea it had turned up as  ‘Snowflakes’. I am sure you can guess why.

Some of the best plants I know are named after real people. I don’t agree with the nurserymen especially when a name has an evocative story.

The nerds among you will have noticed the x in the ‘latin name’ indicates hybrid origin - x purpurea means the malus species is a hybrid. In this case not a recent hybrid, ‘Crimson Cascade’ is from a self pollinated flower. It’s mother Malus aldenhamensis itself was a chance seedling found in a garden in Aldenham many years ago. It would be now speculation to discern whether that was the original hybrid cross. 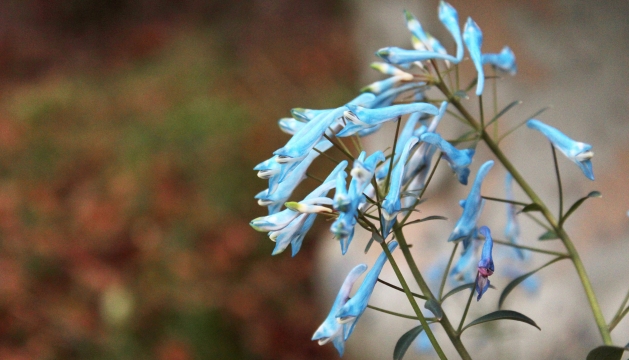 Another hybrid, one that occurred at Hilliers by natural and random insect cross pollination. Ten years observation at Hilliers show it to have strong hybrid vigour and to flower for much of the year. I suspect that it’s parents are Corydalis elata and Corydalis flexuosa. I don’t actually know this but I grow the variety ‘Spinners’ which has the same parents and in my garden has had flowers March through to December. (With short rests in-between). The beautiful porcelain blue in Hilliers' new variety looks the same as that in Corydalis ‘Blue Summit’.
I have soft spot for Corydalis flexuosa and elata and two years ago blogged about their cultivation. 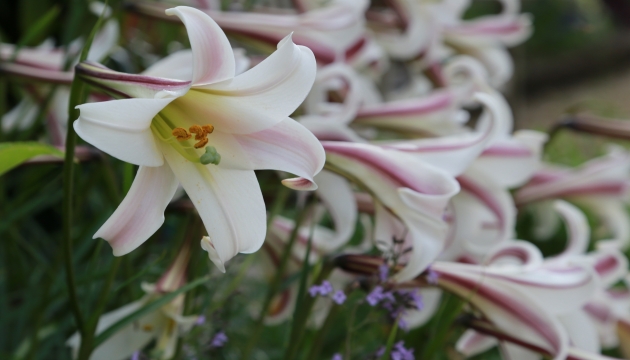 Recognition at last!  (The plant I mean). I have grown this delightful dwarf lily for years - and sometimes lost it too. If you save its prolific seed you will have dozens of full size replacements 15 months from sowing. Just imagine a lily a couple of inches high holding full size white lily flowers aloft up to four inches! Some think it strange but I find it delightful and it is one of my favourite plants.


I think my own Lilum formosanum pricei is an extremely dwarf form and the size I quote might mislead you. In common with most available plants of this species Hilliers’ plants grow about 15 - 18 inches high.

Hilliers
They are hoping to achieve their seventy second gold medal at Chelsea this year and have exhibited there for more than a hundred and fifty years.

I have fond memories of regularly thumbing through their catalogue which was our bible at the Lancashire College of Horticulture fifty years ago. If a Lancashire gardener needed us to identify or obtain a tree or shrub it was always from Hilliers Manual. It was a complete list of trees and shrubs available from Hilliers and embraced just about every woody plant grown in the UK. Many botanic gardens were stocked from Hilliers as were many other gardens owned by the great and the good.

The 72 acre Harold Hillier Garden at Romsey was donated to the public and is a must for any gardener visiting the Winchester area.
The Hillier catalogue eventually appeared as a book and is still very well worth buying.

Alan is 87 now and is looking good for a hundred. He is delighted to know that his tree will be his legacy to the gardening world. As to his theory of water movement up a tree he recognises the world is not yet ready to believe him. I suspect as a scientist recognition of the latter would give him as great a satisfaction.
They have invited him down to Chelsea. He will be there on Thursday. In my opinion he ought to be there with the celebrities on Monday.

Links
The dicentra that went to Chelsea
My corydalis post
Alan Warwick's botanical theory
I have been carried away with new pictures from Alan and have posted again!