It was bloodroot, Sanguinaria canadensis

All the way from the woods of Missouri - I lie - this woodland  ‘ephemeral’ thrives in Peter’s Seaton Ross wood. It’s called an ephemeral because the flower and foliage does not last very long before it goes dormant. As a plant if it likes its situation it goes on forever if left undisturbed. Difficult for constant soil fluffers however.
I must say the response to my quiz was quite pathetic. In the end I prompted blogger Rick to solve it. Thanks for the interest Rick. It was clever of you to maintain the secret and carry out the correspondence in the very next post!
Let me walk you through Peter William’s puzzle. 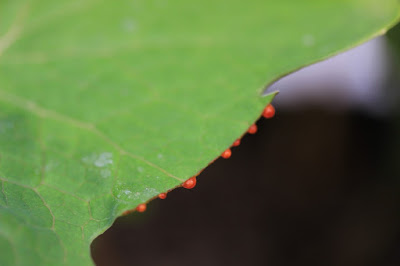 This to me first appeared to be a boot! As soon as I refocussed it was a leaf 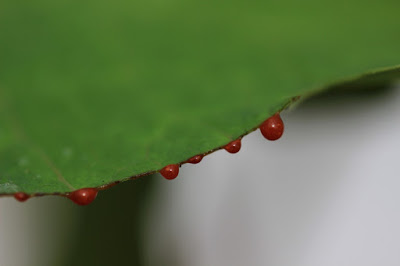 Its clearly a leaf here. My first assumption was that it is an example of guttation. This is the phenomenon where ‘root pressure’ forces out sap droplets in very humid conditions.
I was wrong. Peter with his inqisitive mind had wondered if the poisonous blood coloured alkaloid sap that gives sanguinaria it’s common name bloodroot came up to the leaves. He had cut them - and yes it does but it is much paler. 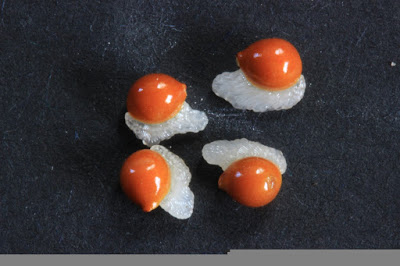 Another picture that requires you to refocus. It is not a fried egg or as suggested a mollusc. It’s a seed.
This is where the myrmecochory comes in. This is when a plant exploits ants to distribute seeds. The ant is rewarded by a small nutritious morsel called an elaiosome which persuades it to carry the seed home. Here the ‘white’ of the ‘egg’ is a wacking great big elaiosome - an ant's idea of a feast. 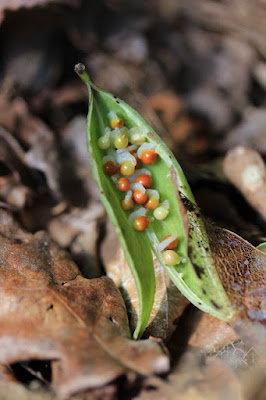 The mature seed pod makes your task clearer. It would be interesting to know how away from its home in Missouri  bloodroot gets pollinated. Various solitary bees might do the task in return for its nutritious pollen. It’s no good for honeybees as it does not produce nectar. Just as well because it might very well have been toxic.

Peter’s later pictures and hints how to grow bloodroot 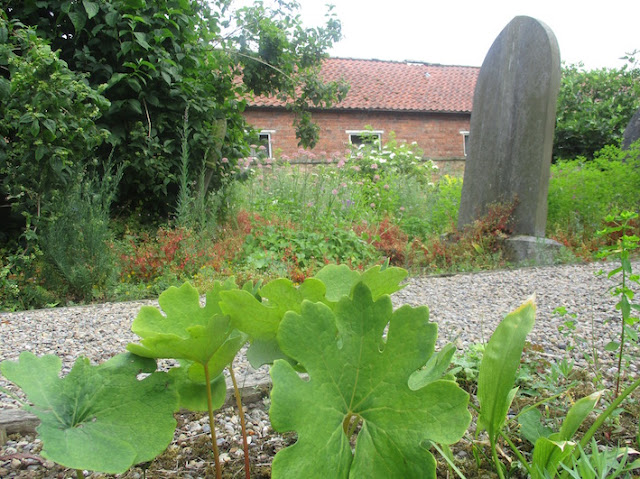 It was one of the early plants I planted in Bolton Percy cemetery forty years ago. It did not thrive but it has survived and in a good year it flowers. It has had a checkered history and not least it has suffered a nearby ever expanding Leyland cypress. Forgive me I propagated and planted the monster. Over the years the patch got drier and darker and too close to competing vegetation. I thought the bloodroot was gone. What has gone now is the wretched Leyland - it has been chopped down. I was delighted that my bloodroot has reappeared and has celebrated by flowering. Sorry I missed it!

Bloodroot is poisonous and is subject to quackery
If you 'goggle' to find bloodroot, search for sanguinaria. Otherwise you will find dubious adverts for very dangerous concoctions. I don’t want to be responsible. As a garden plant it is perfectly safe to handle.


I have written before about my own favourite woodland ephemeral Dicentra cucullaria. Eight weeks after it has appeared it is gone! That too has poisonous rhizomes and American farmers used to call it stagger weed. It is my most loved plant.