I caught the last bit of a Radio 4 item that mentioned the use of reeds in wetland restoration. My grasshopper mind immediately went back to our student visits to the Zuiderzee  in Holland and the story of how huge tracts of land were claimed from shallow sea.The first stage in land reclamation after huge barriers had excluded the sea and the seawater had been pumped away was the planting of many square miles of reeds. For the first two years they sucked water out of the saturated sand before crops of brassicas were planted to continue soil formation.
Many of you will be aware of reeds powerful root action in water purification and their ability to transfer air through their soft tissues into the ground.

My pondering quickly moved on to an old New Scientist article about how researchers had been surprised that many peat bogs dated back a very long time but usually not more than 4000 years. Now I know there has been massive climate changes over such time but the researchers had concluded that the initial bog formation coincided with the felling of large tracts of trees as land started to be farmed. Certain sites where the drainage was impeded retained too much water and peat bogs had formed. Up to that time the trees had kept the land dry.

My preamble might lead you to expect I am going to recommend planting trees to dehydrate an excessively wet soil. Unfortunately this is not usually effective although if you do have a wet site planting water tolerant trees might look very nice. The problem is that water loss from deciduous trees is very small when the trees have no leaves. There is less evaporation when the weather is cold and there are not many evergreens that grow in bogs. Not much help when most drainage problems occur in Winter.
Most people’s drainage issues arise when their garden receives excess water from higher ground. Any puny amounts of water extracted by leafless trees in Winter is immediately replaced as more water moves in.

Where planting might help the situation is on sites where drainage is impeded but little excess water is received from elsewhere. It seems to me that when a small wood goes into the Winter with a large soil-water deficit as a result of Summer dehydration then Winter water-logging is sometimes avoided.

Might it also be that root action of vegetation helps improve actual drainage?

The problem of soil dehydration under trees in Summer

This is a problem for the gardener when it is too dry for underplanted vegetation to grow - and any irrigation is sucked up by the trees.

One solution to the challenge of a dry deciduous wood is to grow plenty of bulbs and Spring flowering plants and write off the Summer! In Spring the soil is wet and the dark canopy of leaves is yet to come. Fortunately most of us do not have to contend with a wood and just a few trees might actually increase our year round planting opportunities.


Some gardeners find themselves under a heavy canopy of trees and have no control over them. In Summer it’s not so much the shade being the problem but the bone dry soil. In a smaller garden for the driest places it might be good idea to grow in containers to ensure your water goes to the plants and not to the trees! The actual shade will limit how often you need to water.

Do shrubs and trees over the years outgrow their water supply?

Young shrubs and saplings establish themselves when roots spread very many more metres than you might imagine to find water. They will often take water from under buildings and roads where extracted water fails to be replenished by Winter rain. As the trees become very much bigger they demand more water and new roots have no new wet places to go.
If the gardener takes no action such as extraction or removing new growth by pruning, severe competition for water leads to the death of weaker specimens. It might not be obvious that drought was the cause when they seem to die of pest or disease to which they became increasingly vulnerable.
My own wedding cake tree Cornus controversa succumbs to stress from my now rather large metasequoia and Swedish birch and is only kept alive by letting the hosepipe run freely in very dry weather. Were I to remove one of the two larger trees my cornus would thrive on its own.


Grass also dehydrates the soil and is a powerful competitor.
Inexperienced gardeners plant trees and shrubs in their lawn and wonder why they fail to grow. Green grass has sucked the soil dry. I have written about this phenomenon before. Ironic really as I am now rather keen on growing wild flowers and garden plants in stands of pure fescue grass when I make garden features modelled on meadows. I completely failed in a previous post to convince readers that ground cover planting does not conserve water - the reverse, it dehydrates

The elephant in the room to this post is that a knowledge of transpiration and the effect of a large leaf area is a fundamental plank when teaching students about irrigation. It is extremely difficult to convince them that evaporative water loss is a meteorological phenomenon that depends most on levels of sunshine, air temperature, wind speed and humidity.
My previous writings about this were received with scorn.


My former boss, PK Wilmott was renowned as a great horticultural educationalist. He said the hardest thing to teach students was how to properly water. He claimed to need a couple of years.

Read how part of Holland was claimed from the sea 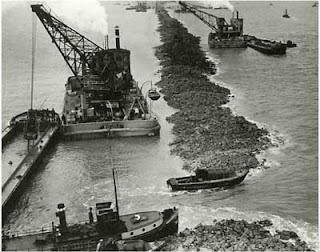 I would love to receive your own experiences of trees dehydrating the soil
Posted by Roger Brook - No Dig Gardener at 07:19