As I write this, there is a colourful display of bulbs outside our conservatory window. Its not for want of Brenda constantly reminding me how Peter’s display is so superior. This year I have taken the challenge and splashed out on a sequence of bold displays of snowdrops, narcissus, tulips and (yet to flower) lilies. The snowdrops came out of the ground and I splurged seventy pounds on 150 Tète a Tète daffodils, 200 tulips and 36 lilies from Parker’s Wholesale.

Heavy containers
Lugging large tubs backwards and forwards palls as a gardener gets older. We have plenty of fairly large hardware containers but they aren’t half heavy and to challenge Peter I need very large ones. These days I am prepared to go plastic They are so much lighter and nowadays so much improved and quite tasteful. I purchased two huge ones, perhaps forty litres and four more not much smaller. For the lilies I made do with my existing smaller hardware tubs.
I still had the problem that my soil/char compost is rather heavy.
Some gardeners bulk up their large pots and economise on compost with light polystyrene granules at the base. I hate this practice and of course my homemade compost is free.
At bulb planting time I have copious Autumn leaves. Why not pack them under the compost? I hope the pictures show that this was very successful and the bulb roots penetrated quickly and densely - a large water reserve unlike horrid polystyrene.
I can report the method worked superbly well. As expected there was slight  shrinkage by Spring but not such you would notice.
I think that this method would also work for Summer bedding but continuing leaf shrinkage would be too severe for long term planting without further refreshing.

Follow my efforts in pictures
Although plastic pots filled with light compost can be too light and top heavy not with large low containers. Yaramila multi-nutrient fertiliser has been mixed in - improvements to current years flowering will be small but will help make strong bulbs for next year.


A quarter filled with my soil/char compost after leaves' sinkage. All the pots permanently outside on standing area until displayed. Tulips deliberately planted late at the end of November. Early planting gives too much time for accidents and has no merit.

On the other hand early planting and time to make a healthy root system is essential for daffodils (And many Spring bulbs, especially hyacinths). At this stage I had not acquired the final display containers.
On the same day I planted the tulips I plunged the knocked out pots of daffodils into their containers prepared the same as the tulips


Several weeks later management intervened! Brenda insisted that this hardware  container must be planted. I did have two spare large plastic tubs and invited her to do it herself. Already the under leaves were flush with new roots and there would be inevitable damage.

These are the heavy pots we find so difficult. Perhaps I should have lifted a more generous filling of snowdrops?

On a whim I tried one daffodil pot with corydalis. Failure, the daffs completely outgrew them. They might as well not have been there.

I write now at the end of my Spring bulb season and my bulbs have surpassed our wildest expectations. Brenda shuffles the bulbs around to make lovely large displays outside our (live in) conservatory windows and they have given us much joy from mid January to mid mid April.
In particular the tulips have been a revelation. Their colours are so bright and strong and massed together are firm and free standing despite persistent windy conditions and some stood high on a table.
I tend to think of tulips as rapidly going over on warm Spring or early Summer days. Not these (yet). Each of my six varieties have elegantly merged their continuity to give us six weeks of continuous flowers and as I look out today on Easter Sunday all massed together still make a fine display. No single variety has give us less than a month’s strong flower.
It has been unusually windy and dehydrating  and through the last month they have needed generous watering  every three to five  days. Many new gardeners overlook this - it applies to tub planting but not in the ground.
As to sinkage of the underlying Autumn leaves, after a small initial drop it has  been barely discernible and a slightly deeper rim completely disguised by strong leaves gives room to water.


I popped down the road to view the opposition. Thank you Peter Williams for your very fine pictures 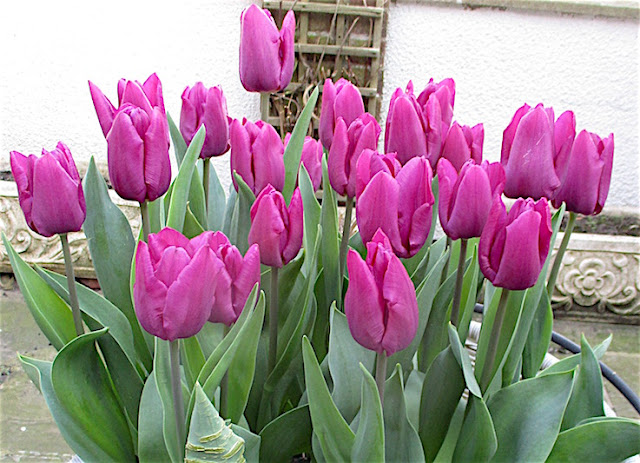 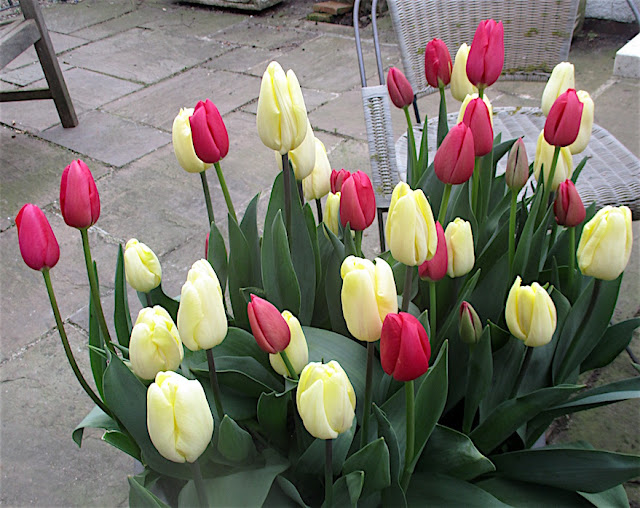