My garden in April

The tap is turned off

April opened with the lower garden under water. Seriously so. The tap had been turned off two weeks earlier and I was desperately anxious for the then persistent drying winds to evaporate it away. Until a few days ago the dry wind persisted.
It’s like that here  - its wet for an eternity and suddenly it seems it won’t rain ever again. Sods law!
My pond levels are now seriously low and I have needed to water the azaleas and rhododendrons at the top of my garden and the turf is turning brown.
Actually it is still very wet at the bottom and although cold soil has held things back my moisture loving plants are now romping away. At the top it is now seriously parched.

When we moved in we made this our acid border but later discovered azaleas and rhododendrons grew better where it was wetter.
We love the 'borrowed landscape' from Cathi's cherries next door 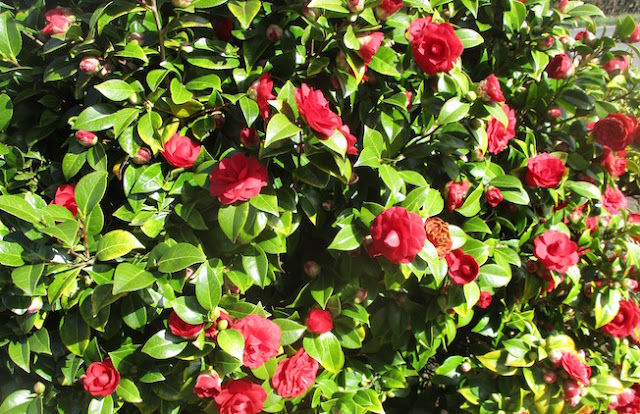 Its been cold but not seriously so. I have not had decent camellias for years and have started to regard them as glossy leaved ‘structural’ plants. Their fat flowers buds annually are destroyed by frost as soon as they open. Not so this year and they have been a joy. So too pieris with undamaged flowers and pink and red leaves.

You win some and lose some. That is the pleasure of gardening.

Each year I walk a tightrope with tomatoes when I sow them too early. Not as soon as some amateurs I know. It was the last week in March. I sow them in the warmth of the house and immediately the first seedling appears they go on my lightest warm windowsill. Two weeks later they need to go into my unheated greenhouse.

I never cover with plastic or glass and you might correctly imagine
the recycled compost has just been scraped off the bench (you can see from the weeds) 17 seeds sown, 17 healthily germinated. No damping off.


....just as well as they needed another week of nights in the frost free garage

My greenhouse is a very old leaky structure and those damned winds persisted even at nights. For the first ten days I had to park the single seed tray in my frost free garage each night. After planting I had to rely on covering nightly with nightly newspaper and four of my plants failed to make it. I sowed some more Shirley in a seed tray in the greenhouse during this recent warm spell to replace the four casualties


I reported last year on my grassless meadow! Now it is in its third year I have not sown any seed at all. At the end of March the self sown seed germinated densely like mustard and cress - they just loved the then very wet well drained soil

As I write today it is raining - the first for six weeks, and I am in heaven