Leaving Dahlias in the ground overwinter

The normal way to overwinter dahlias is to lift them after the frost turns them black and to store in a cool frost free dry place. Not one for following careful instructions it has not been always successful for me. Well documented elsewhere I do not propose to describe how today!


For several years now I have left my dahlias in the ground. Not always successful I do have by now strong plants that I can more or less rely on. Some have survived for up to a decade. Through the last two mild Winters I have not lost a single plant and with self seeding my stocks have increased.

Would any survive another 2010 Winter when temperatures of minus 20 centigrade persisted for six weeks or more and cold penetrated deep in the ground? They would not.
I would buy some more and start again.
No doubt there has been some self selection of the hardier kinds. Those that have come back each year have liked my conditions. In passing I might mention their are some species of dahlia more regularly regarded as hardy. A particular favourite is Dahlia merckii.

If you live in colder areas than I do or have heavy poorly drained soil my methods will not be suitable for you. If you live in the balmy south-west I suspect it is the normal method.

I would love to hear reader’s experience and receive their opinions. I don’t live in hope as other than my much loved and appreciated stalwarts most readers seem reticent to offer an opinion. I often feel I have failed and my only conciliation is that many other garden bloggers share this frustration.

How things have changed


In my youth I would have considered leaving dahlias outside through the Winter as foolish. I also considered them gaudy floppy labour intensive things not for me. I now truly love them and regard them as an essential part of my summer garden totting up  almost five months of continuous flowers. (My best performance being mid June to the beginning of November).
I remember I once had a client who by neglect had failed to lift her dahlias in a very sheltered part of her York garden. I was amazed they came back every year and thought it a complete aberration!
What has changed? Is it climate change and warmer winters? Is it just my expanded ambition? Are modern varieties tougher?
I am told that Victorian gardeners knew that if buried overwinter below the level of soil freezing they would survive in the ground

Dahlias will fail to overwinter if your drainage is poor and there is excess water at the depth of the tubers. My soil is sandy which makes it very suitable. Even so the lower parts of my garden are too wet and I have learnt by success or failure where they will happily survive.

I suggest when first planting you plant them as a green plant and quite deep a couple of inches more than normal - or even much more. I was told that way they subsequently form new  tubers deeply. I have doubts whether this is true and many of my plants are undisturbed self sown seedlings.

Reader Brian Skeys kindly sent me seeds of a lovely extra-hardy dahlia strain and the three plants I raised have now made up to a dozen - and extended their range of colour. (Brian I have forgotten their name, if you are still there perhaps you would tell me?).

The bishop’s children (legitimate and illegitimate offspring of The Bishop of LLandalf) have established the same. I think that like the more tender varieties of alstroemerias, dahlias make ever deeper tubers as the years pass by.
Each year the plants get stronger and with multiples of growing points are less likely to need staking. One or two of my taller ones flop all over and Brenda shouts at me when she needs to put in a stake.
We frequently suffer from late spring drought. There is no problem with my dahlias, the roots are already down.

It is quite easy of course in late Spring/early Summer to shove your spade in deeply and take out a large segment to replant as new stock. So too with a sharp knife take cuttings going deeply to a fleshy white base (not essential). Use your favourite method of rooting preferably under glass.
In early June this year I took advantage of the wet spell to transplant some young plants that had seeded in the wrong place. Young dahlias transplant very well with very little check to their growth. 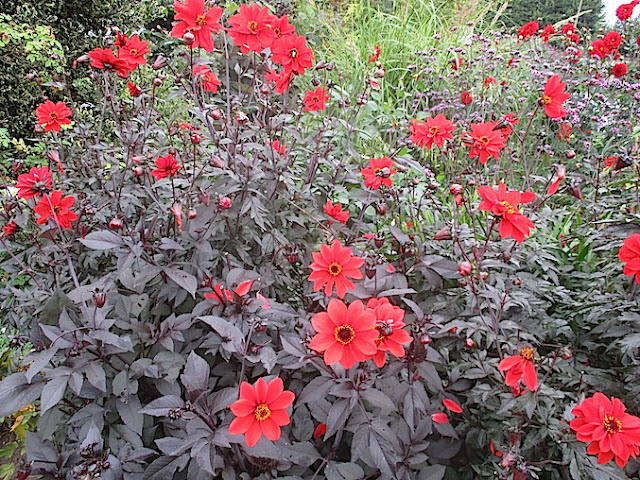 There might be some merit in mulching over with such as insulating autumn leaves or straw when your dahlias die down. I half heartedly leave dead tops intertwined with Autumn leaves  that I rake over the top.
The trouble with such insulation is that continuous frost for a day or so soon penetrates through. Your own overcoat keeps you warm because there is a heat source from your body within. Heat stored at depth in the soil is very small.
My none mulched plants come through just the same.

Although I claim leaving dahlias in the ground will be more healthy than overwintering dry and will have less fungal disease such as root rots and subsequently all the perils of humid greenhouse conditions and pest presence, last year I was not immune!
I was caught out by these aphids. In the picture they are already moulting. I know you can control black aphid on broad beans by pinching them out at the tip of the shoots, thereby restoring the natural balance with hungry predators. I had to go a step further here and cut them half back. They soon made new strong growth and were as good as ever.


Alerted this year by blogger Sue Garret who reported that she also had suffered black aphids on her dahlias I rushed out to find in mid June just one infected plant of my own. I snipped it away.