The magic of silicon


Spoiler alert, my post today is unlikely to improve your garden one jot. It is highly unlikely your garden is deficient in silicon. Next to oxygen it is the commonest mineral on the planet and for most British soils, plants have free access to it. The mineral content of my own soil is almost all silt/sand - almost pure silica rock.

The boffin’s definition of a plant nutrient is a mineral essential for a plant to complete its life cycle and is a constituent of a least one cellular structure. (I am not sure how completely essential potassium satisfies the latter criteria)
Silicon fails both tests. Plants in hydroponic solutions grow perfectly well without it and to all appearances it appears in the plant only as elegant crystalline deposits.
One might add in most laboratory containers such as glass ones, it’s almost impossible to avoid the presence of very small quantities.
The cynic might claim that our laboratories who omit silicon in their hydroponic nutrient solutions create plant artifacts and then draw false conclusions. Such conclusions might have worldwide significance.
The undisputed truth is that grown in the soil plants absorb substantial amounts of silicon. Levels comparable to that of the major nutrients. Sometimes very much more. Ten percent dry weight of plant tissue has been recorded in certain grasses!
It was once thought that silicon merely entered and was passively dispersed in the plant with the movement of water. It is now known that like recognised nutrients it is actively absorbed. What’s more this very insoluble nutrient is within a soil’s biosphere  converted to a solubility comparable to all the main nutrients.
This high level of solution greatly exceeds that which might stray into scientist’s glass bottles - unless soluble compounds of silicon are added as they not normally are.

Significance in the garden
So silicon is not a nutrient, not necessary for plant growth and is most unlikely to be deficient in your garden. Why does it matter?
There is a small possibility if your garden is on a highly calcareous soil or a reclaimed moss peat many miles away from a supply of wind blown siliceous erosion it just might be.

You might live in the Florida Everglades or are the proud owner of a rice paddy field. Seriously, there are huge silicon-deficient zones out there in the big wide world.

What is of interest - albeit being beyond your gardening control, is that silicon although not essential for plant growth does wonderful things to enhance it.

Benefits of silicon to plant growth
Most of these are due to its hard crystalline nature and its ability to harden plant tissue. In terms of plant evolution it is much less ‘expensive’ than manufacturing lignin.


1. Although not essential for plant growth many plants grow better, sometimes very much better, when they have access to silicon. For some crops, yields are increased and for flowers they might be bigger and hang more erectly.

2. Similarly leaves may present themselves more efficiently to sunshine.

3. The structure of the plant is more stable with respect to lodging down in wind and rain. 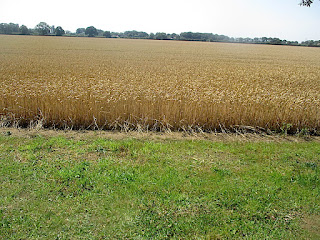 4. Silicon interacts with other elements in plant solutions and toxic effects of such as excess manganese are reduced. There are advantages in surviving in polluted or salty soils.

5. The toughening of cell walls make them more difficult to penetrate by fungi and give a much enhanced resistance or tolerance to many fungal diseases.
Similarly parasitic plants are less able to penetrate. This is of huge importance for certain world crops.

8. Root growth can be increased.

YESI - York Environmental Sustainability Unit
My new awareness of the benefits of silicon came when I attended a lecture at the Yorkshire Arboretum by Professor Sue Hartley from the above organisation on the subject of  sustainability of world food production.

She never mentioned bees once! Tell that to Monty - for the world’s major foods (rice,wheat maize and potatoes) bees are almost irrelevant! (That is not to say that together with wasps they don’t do wonderful things and we would not want to be without them).

The above picture is take from the YESI website and shows two micro pictures of silicon deposits on deschampsia grass. On the right extra silicon has been laid down in response to pest damage
Sue's lecture reported the benefits of silicon in world rice production where it is already applied as a fertiliser which is commercially readily available as a by product of industry. She showed wonderful micro pictures of the arrays of silicon phytoliths and showed how conventional breeding programmes (informed by gene manipulation) were being used to enhance rice silicon uptake and effective distribution of these crystalline deposits. If you were a chomping insect you would despair for your mandibles.

The weed variously described as horsetail or marestail is one of the very few plants that seems to require silicon for long term survival. It contains more silicon than all the other soluble nutrients added together and in almost all of its cells. So much so that one common name is  'scouring rush'. That says it all. Now I understand why it is such a noxious weed on sandy York allotments!

Silicon is the reason why marestail's hardened surface makes your weedkiller run off. Many gardeners bruise its leaves to increase absorption or use a very fine spray that dries on the the leaf and stem surface.
I wonder if any readers have soils that are too low in silicon for this weed to grow. Such lucky people might have an organic peat soil or one so calcareous that their sand and silt is entirely composed of calcium carbonate. I would be interested to hear. (On second thoughts perhaps I should omit 'lucky').


Discussion
As mentioned, don’t rush out and silicon feed your plants. Silicon is even a constituent of tap water. Beware of siliceous charlatans who will seek to sell you extra.

I think it a mistake to regard silicon as a trace element. Plants use it in much more substantial amounts than that and I think many laboratories who do not add it to their solutions really might jump to suspect conclusions.

Are our own plants in the UK ever deficient? I am unaware that they ever are. I mischievously wonder if soft growth in garden centre plants grown in such as peat or other exclusively organic composts and grown dependent on extensive liquid feeding might ever be deficient. The industry seems to be becoming aware of its importance in respect of plant quality. It would be nice to buy plants that do not keel over and die as soon as we get them home.

Another straw in the wind of the benefits of tissue hardness is that one Dutch turf breeder now classes his grasses from hard to soft. Grasses are being bred and graded with varying silicon geometries.

So what about my title "for the sake of the planet?" The world's most important food crops are all grasses which contain much silicon. Some of the world's soils are deficient.
Improved silicon uptake by either fertilisation or better absorption and utilisation as a result of plant breeding have great  potential.
There is a perceived need for less reliance on pesticides in newly bred crops. Tough silicon tissues might fulfill some of this need
There is a need for greater plant drought resistance and tolerance to climate extremes. Stronger root systems seem to be promoted by the action of silicon. (Perhaps it is no surprise that gardeners marvel at the depth that the roots of equisetum goes to).
There are huge crop losses due to crop's lodging over.

There is innovative research proceeding on all these fronts that involves silicon.


Forgive me for demoting bees as agents of world food production. I really do love them

I rambled about hard and soft growth

I hope YESI do not mind me using their picture

My opus on controlling equisetum