I have returned today from a weeks stay with Brenda’s family at the foot of the Dura mountains in Gex, France. It’s skiing country there. It was our first visit since they moved from Toulouse.

Learning a new language
No, not French, it’s more about the subtle uses of English phrase! “Is it the right time to prune roses?” means “Roger, will you prune the roses?” “Can you show us which plants are weeds?” equates to “will you weed-kill the garden please?”  But they do know I enjoy my gardening fix!


Pruning the roses
Well actually it’s not the right time, but I always take my chance. I remember an old rosarian nurseryman who said, “You can prune roses early or late, you can prune them hard, gentle or not at all, they will still flower!” Two weeks ago these roses were under three feet of snow. During our stay it was dry, sunny and warm but for the next two months they are due to be continuously covered with snow! This actually works quite well for pruning early. At home our changeable climate gives too many warm false dawns of spring, followed by harsh cold. I found this out to my cost many years ago when I pruned a few lavenders hard in January rather than wait until March.

Weeds quickly dispatched.
Contrary to the common view, the January conditions were ideal to spray with glyphosate! It was a very short window of opportunity. All of the ornamental borders, hedge lines and any exposed soil were covered with seedling weeds, especially that ubiquitous thug, hairy bittercress. Fortunately the only perennial weeds were couch and other perennial creeping grasses. They were still green! Typical of a non gardener’s garden (sorry Peter), strong weed grass was also growing intermingled amongst clumps of established plants. Fortunately for me, the garden plants were tough cookies - spreading coarse ground cover such as juniper, cotoneaster and vinca. No weed control had been done in six months!
Perfect for spraying! Intact un-chopped weeds with living green top on a dry, warm, sunny, wind-free morning, fairly thin cover of mainly dormant garden plants, no snow forecast for two days. What could be better? Of course at this time of year, it will take take these weeds two months to die! No matter, as soon as they were sprayed they were as good as dead! The weeds are not particularly intruding or unattractive at this time of year. I believe garden maintenance should be done for the long term future benefit of the garden, and I have no interest whatsoever in being complimented, “Roger has done a fantastic job, he has transformed the garden!” The important thing is that when Peter’s garden springs into growth, it will be completely weed free. It might even last until we go next time! (if invited) 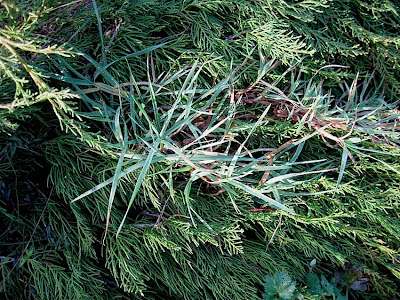 I had intended to demonstrate how you can wet your waterproof-gloved hand with dilute glyphosate and selectively smear these perennial grass weeds to completely eliminate them. In fact the weed is such an easy target and the juniper so bombproof, at this time of year, I just carefully sprayed!

No sign of chalara here. In Gex, numerous ash seedlings and saplings are to be seen everywhere on road verges and in ditches and hedges. I harbour a very small hope, that last year’s aggressive spread of this virulent pathogen might be uniquely exacerbated by the peculiar season last year with severe winter drought until March and excessive wet from there on.

Late news from Gex. The garden is now covered in heavy snow.