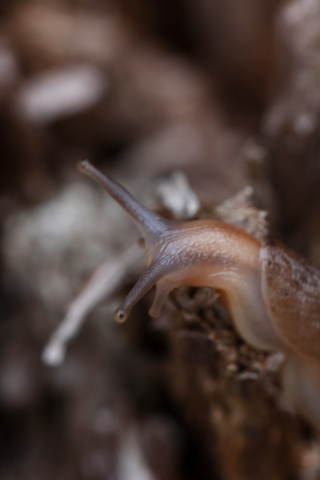 Slugs and snails
When visiting parties used to come to Bolton Percy cemetery I was often asked why my hostas were not damaged by slugs! Funny, when gardeners get together they always talk about slugs. It must be a measure of slugs’ success in eating our plants!  The observation about my plants was scarcely true, but did reflect that my hostas were healthier than  those in normal gardens. According to gardening lore, garden hygiene such as avoiding plant debris reduces slugs. With my methods of directly recycling fresh organic matter what’s going on? I have argued for years, perhaps tongue in cheek, that it did not matter a damn if I encouraged more slugs, as long as they were doing what nature intended, eating decaying organic matter which they prefer. Indeed it’s part of the natural cycle of decay. Slugs have an image problem.They need to employ Bartle, Bogle and Hegarty, we would soon be singing their praises. “Put it this way”, I say in my lectures, “no wonder the slugs eat your hostas, if you clear away all garden debris there is nothing else for them to eat!”
There is  some scientific support for this idea. First I must explain, that there are hundreds of different slugs and snails. What is true of one may not apply to another. In this post for convenience I write ‘slugs’ when I mean both slugs and snails. Years ago, I read an interesting article in the ‘New Scientist’ about slug slime trails. These are super-highways for slugs which they continually re-use as they zoom around our gardens. I found it very interesting to read that the more slime trails they crossed, the less fecund they become. It’s a natural way of controlling their own population. If true, it’s rather ironic, that all those gardeners -  often eccentric academics - who go out at night with a torch, ‘picking slugs’ merely succeed in making them breed faster! 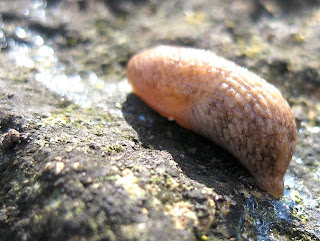 A lady recently did an interesting piece of valid research that if you pick up a snail and fling  it away, unerringly it will find it’s way home! 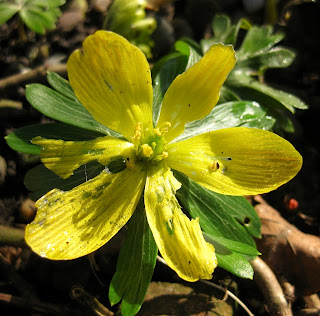 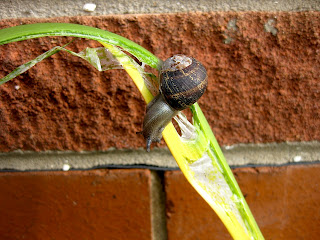 Slug biology
They are the only land living mollusc. I love the word gastropod, the name of the group to which they belong!  An interesting feature is their rasping tongue called a radula. It’s a kind of ribbon with thousands of replaceable backward pointing teeth (I don’t mean dentures!) Like sandpaper it scours the plant leaf to produce the damage illustrated above. Slugs are hermaphrodite and have a very interesting sex life, but I will not go there! 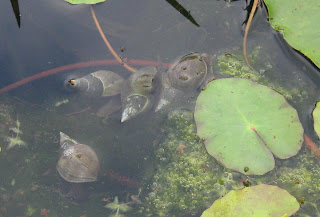 Using  slug pellets
I despair when I see blue mulches of slug pellets. I break out laughing when I see  ‘protective circles’ of pellets around plants. Don’t the blue mulch brigade realise that pellets are a poisoned bran bait and that such large quantities are a danger to domestic pets and wildlife! Pellets only need to be used in miserly amounts, half a dozen pellets a square meter will usually do the job. For my acre garden, a standard tube of pellets lasts me about three years - and most of these are used in my greenhouse!  As to the protective barrier idea, the bait brings the slugs right up to your plants where they may very well decide that your plant is rather tasty! Pellets should be scattered a short distance away from your vulnerable newly planted brassicas.
There is an important issue as to whether slug pellets are safe to wildlife. If used sparingly in the domestic garden, I believe that they are safe, although I cannot vouch for their widespread use in agriculture. Best to apply the pellets under a canopy of plants. It is suggested dead slugs might be eaten by birds but this is disputed. Pellets really are dangerous in packets accessible to cats and dogs. There have been tragedies where pets have eaten poisoned bran direct from the pack. I am told that these days, bran is treated with animal deterrent.

The most vulnerable plants to slugs are those that are newly planted. Perhaps that’s because they are soft from a previous propagation environment or as many gardeners believe, slugs ‘smell the stress in a wilted plant’. After all, as stated previously, their preferred food is dead plant tissue. On the rare occasions I use pellets outside, I apply in the evening before I am due to plant. Try and use pellets where and when they will remain dry. Wet soggy pellets are of little interest to slugs and the metaldehyde poison becomes completely ineffective.

There are  a legion of methods of slug control. Most are fiddly or ineffective and may not be wildlife friendly. For example ‘slug pubs’ are likely to kill desirable ground beetles. I would be very interested to hear of your own successful methods. I understand that wildlife friendly slug pellets are now being marketed. But read these doubts. In 95% of my garden and in all of my natural gardens I use no slug control at all. 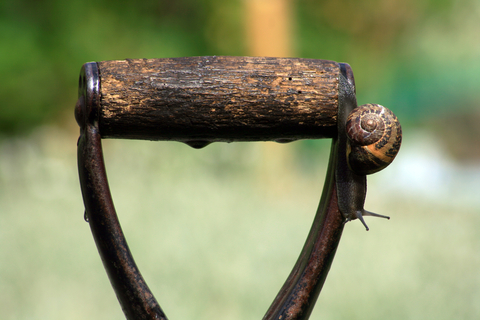 Sometimes checking out facts in google I come across something interesting. The story in wikipedia under the heading ‘famine food’ appealed to me!