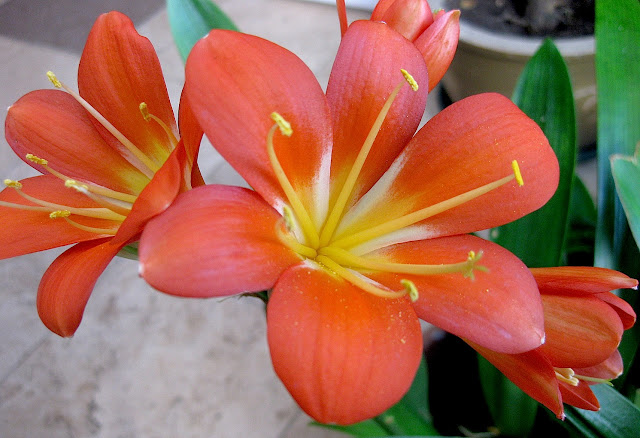 On our our second day in Madeira we received an e-mail from our neighbours. The heat setting on the boiler had not operated, it was minus ten centigrade outside, the pipes were freezing and the conservatory was zero! Wonderful Harry came to our rescue!
Just in time, both the pipes and the plants were saved. Now, after four weeks, even Brenda’s precious orchids are unscathed! Clivia miniata will stand minus four for a short while, so no problems there.

My first memory of clivia is as a handsome, dark, shiny-leaved, foliage house plant for shady places. It was quite a revelation when I discovered that, when grown in plenty of light, it has beautiful flowers. In our conservatory it repeatedly produces fantastic orange flowers from November to March.

In Madeira, this bulb was to be seen everywhere used as ground cover. Sometimes it was in very heavy shade under trees. It’s flowering season there was over. I’m afraid I was too preoccupied snapping exotic flowers to photograph it, a shame as it was so prolific on the levada walks!

As a house plant clivia likes a large pot. Our two plants are in eight inch diameter terracotta pots. They grow well in a range of composts. Mine are in my home made soil compost - only possible because my soil is sandy. I top dress with my general NPK fertilizer about every two months all year round. Regular liquid feeding achieves the same result, it’s just that I am lazy and it’s a chore.

Our clivias have a summer holiday outside between June and early October. They come back inside when first frosts threaten. A touch of frost is ok, and indeed they should not come inside too soon as a touch of cold aids the initiation of abundant flowers. I have to say in summer they look rather moribund and snails love them. I actually found a tiny snail on my plant today!  Outside, they are kept in an out-of-the-way shady spot.The bright summer light and shock of going outside usually turns many leaves brown. No matter, it does them no harm. 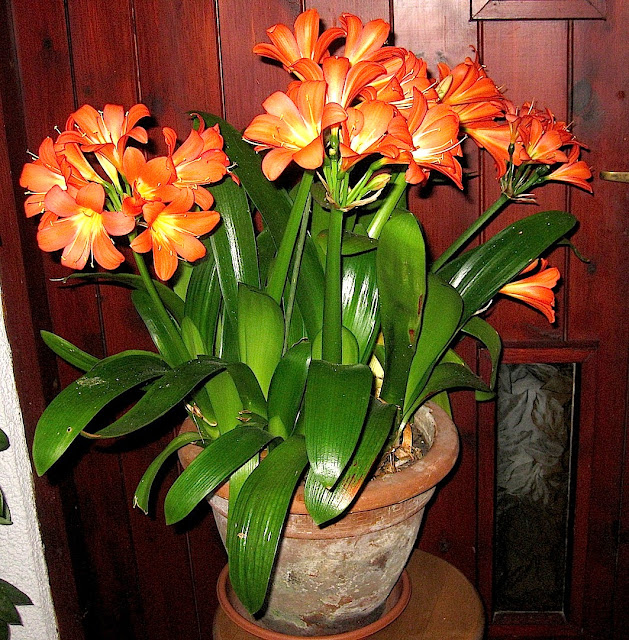 When I bring them inside I give them a little extra fertilizer. They are about to make lovely fresh new growth and will very quickly come into flower. When plants are naturally making growth is the time that they need nutrients.

Although clivias like to be crowded in their pot, after a few years they need to be divided after flowering in Spring. There will be no shortage of takers for any new plants!