How to grow phlox 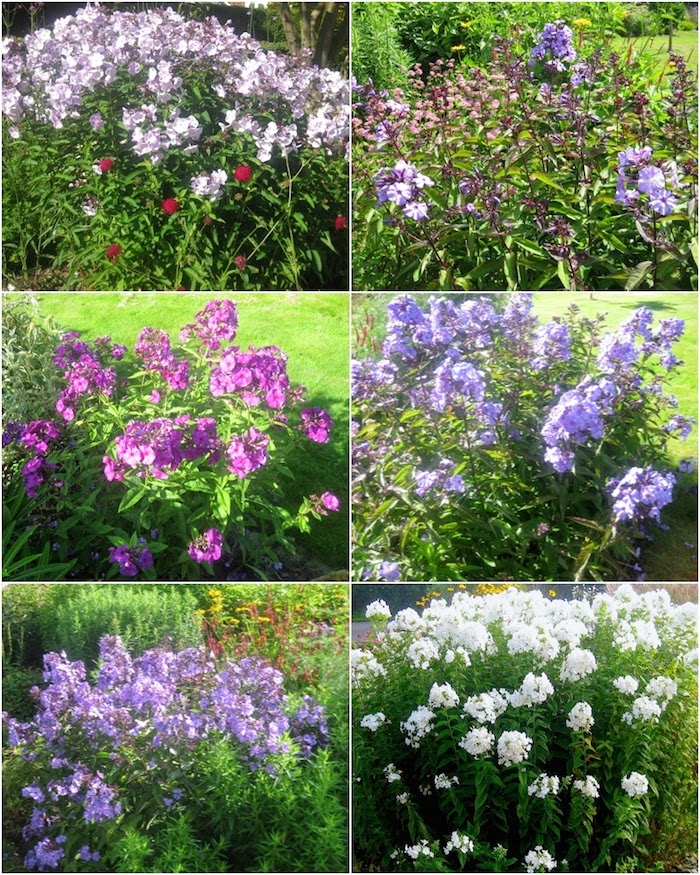 Phlox paniculata is one of my very favourite herbaceous perennials. Perhaps out of fashion it gets little acclaim  and some think it common. 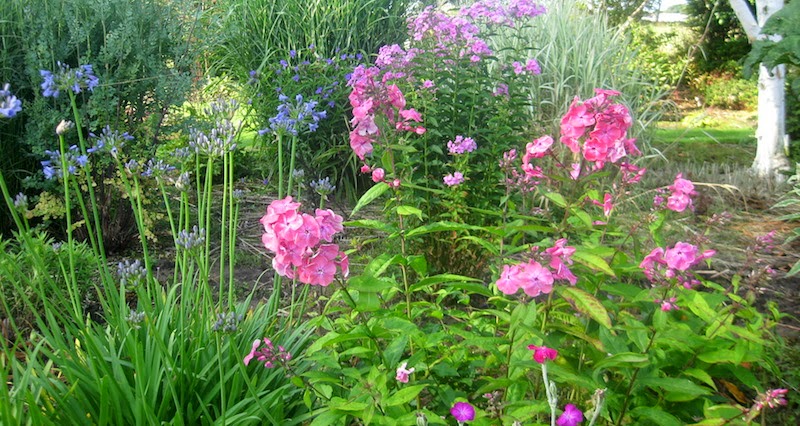 Choose you variety and you have almost all the colours of the rainbow. You can have the Union Jack, happily still flying in red, white and blue. Flower colours are strong and vibrant and I can think of no plant with more intense exuberant white flowers.  Just google ‘phlox images’ to see the huge range of strong colours.

Often scented, sometimes magnificently so, a fine feature of phlox is that the flowers last for three months! Some perennial plants have the achilles heal that although magnificent in pictures they only last a few days. Not phlox. If you choose your range of cultivars carefully you can have them in flower from May to October.

Cultural notes
Phlox like a water retentive soil and readily available water, right through the Summer. Although they do not like water-logged soil, parts of my garden are not very far from it. Some readers may recall that the bottom of my garden sometimes floods for short periods and I have created raised beds above the water and have eccentrically buried great wads of water retentive newspaper. I think my Phlox ‘Laura’ does its very best planted there.

In relation to Summer water supply, my zero cultivation has special value as roots love to come right up to the surface where they can benefit from light showers. Mulching helps  and has multiple benefits but is sometimes over-rated where a blanket of absorptive material intercepts light rain. The latter comment does not apply to a gravel mulch and I have a large clump of phlox in a gravel mulched and otherwise dry part of my garden. In this latter case the strength of transpiration is reduced after about one o’clock when the sun moves to the back of my house and my plant is in partial shade.

Phlox does not like the dehydrating conditions near hedges and under trees. Although in Bolton Percy cemetery I have had a fine clump of several square meters for about 25 years it is now starting to severely decline as adjacent trees have got bigger and take increasing amounts of water and light.

Needless to say if your borders are very weedy  and plants are crowded together there will be increased competition for water.
I do not irrigate any of my own phlox but of course in Summer drought it is generally worthwhile to heavily water a plant with several gallons. Water infrequently and never water established perennial plants ‘little and often’ - unless you grow them in a tub!

Phlox grows well in full sunshine provided it has freely available moisture. If not, it is best if they receive some shade for part of the day. It seems to be agreed that they are best if exposed to direct sunshine that adds up to at least four hours on a sunny day. Less light and they will grow with poor vigour and be susceptible to mildew. A few of mine fail this test even though the shade is not heavy.

Stocks of phlox, planting and propagation

Sorry about the pun but I could not resist it as so many none gardeners confuse stocks and phlox!

Phlox are very easily propagated by simple division. With a sharp spade, just chop and replant, perhaps a little deeper than before. From early September right through until early May will be fine to propagate and/or move them. It would be silly to divide in full Summer but if you are desperate and moving house just cut back the top and move them! Plants from the garden centre unless soft from a tunnel can be planted anytime but if you do so in Summer remember to water.

Like many herbaceous perennials your plants will improve from year to year if you leave them alone. The second year plants will be much stronger than the first year when plants are establishing. We were very disappointed when we moved to our sandy soil - sandy soils are notorious for lacking nutrients - that our phlox were very slow to get going. It was year three before we were proud of them. I now wish I had given them some of my Yaramila NPK fertiliser.

I read that in some cases phlox need to be in place for up to five years before they achieve their full grandeur. I am inclined to agree, especially with variegated varieties. Well established clumps will have greater stored food reserves and I suspect a stronger root system to go down deep and fine water.

I am not one to believe strictures to replant herbaceous borders every three to five years. Gardeners who need to do so must have made a very bad fist of it first time round! I do not buy into the myth that large clumps  of phlox become hollow and diseased in the middle.

In the old days every article one read about phlox emphasised you could propagate them by root cuttings to eliminate stem eelworm. Forget all that nonsense - albeit the fact is a true one. I have never suffered this pest in fifty years and if I did I would burn my plants.

I noticed on the net many seedsman offer seed strains. I have no experience of growing them and they might be quite wonderful. I am however doubtful about growing seed raised cultivars of hardy perennials as explained here 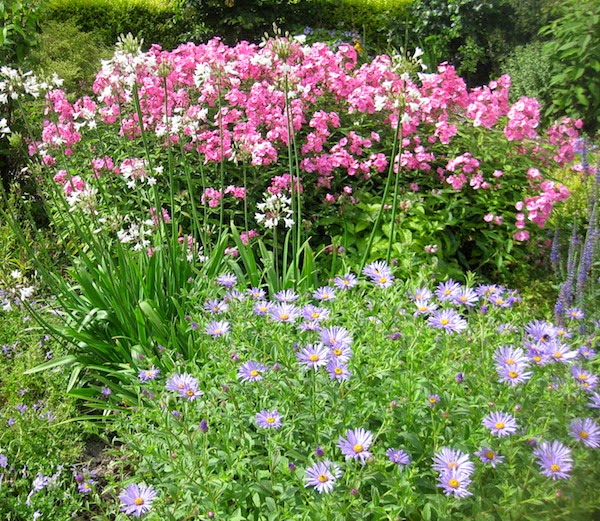 Although phlox has its fair share of pest and diseases, my own have only a few minor blemishes and I never spray them. Mildew is the most reported disease and some varieties are promoted as resistant. Not only are there differences in varietal susceptibility there would seem to be fungus strains of varying virulence. Carried by air borne spores, powdery mildews are quite host-specific and by way of example rose, apple and phlox mildews are all different.

According to the UK gardening press it has been the year of the mildews. The disease has been rather over-hyped, and I looked around my garden to find some and failed. My friend Iris remarked she had suffered from mildew badly this year. Was it that her garden is heavily shaded and her plants rather crowded, or was it that having seen it on the tele she noticed it for the first time? I suspect I am myself similarly blind when plants such as pulmonarias show mildew when they die down. It is just part of the natural cycle.
Mildews are a classic example of the principle that when plants are well grown they are less likely to suffer from pest and disease. Predisposing factors are too little direct sunshine and lack of moisture. Although phlox will grow well under trees the shade must not be heavy.

Does phlox paniculata need staking?
In my view no. But then I do go rather over the top on this issue. I think for many gardeners a crutch is more of a mental one for themselves rather than a support for their plants. When in a gale their plants are severely damaged some gardeners comfort themselves that they did their best as they set about undoing the damage and re-staking, whereas I just stroll round my borders, observe that a few stalks are broken or out of place and cut them away.
I fully understand that in some gardens the beds are too narrow or the plants are feeble and perhaps crowded; plants might be drawn because they are at the back of a border, have not grown sturdily in an open position or are subject to swirling winds between buildings and do need staking. And perhaps if you face Atlantic winds on the Isle of Mann you will be lucky to grow any tall herbaceous perennials at all. Even in my own garden Brenda insists on staking delphiniums and putting a string around a few of the taller herbaceous plants. If you do feel your phlox might need support you might be better growing the more compact varieties although my own tall ones such as wonderful white Phlox 'Mount Fuji' stand sturdy like soldiers. Another strategy is to give your phlox the ‘Chelsea chop’ to ensure compactness - I can barely bring myself to be so PC and use that phrase.

Other phlox species.
There are many other wonderful phlox and I have grown a few of them. Often with limited success and sometimes total failure. Many can be described as a ‘good nurseryman’s plant '. They look wonderful, die on you and you buy another!
This is not true of them all and in my own garden Phlox subulata thrives.

Some further thoughts on herbaceous border maintenance can be found here