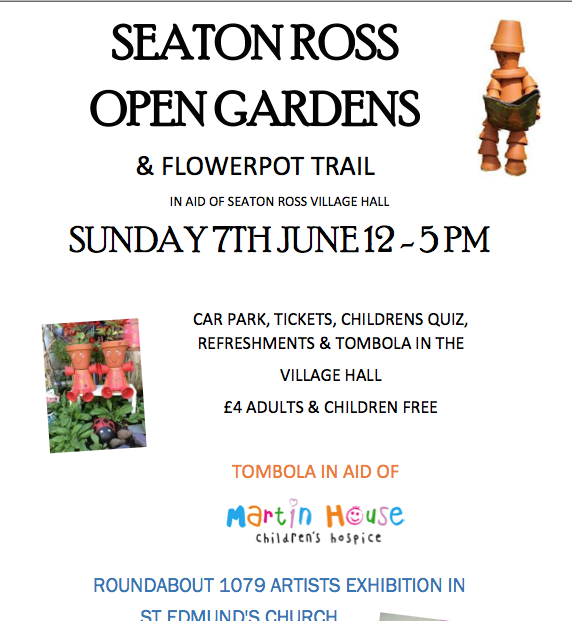 At the moment no pictures. I will publish some later. I know some of you live too far away to come and might like to see our village gardens after the event.
It is some years now since the village last held this very successful event.

Parking is next to the Village Hall where wonderful teas can be purchased. You can walk the village to see most of the gardens that are open. If you are not very mobile you can park in the road outside each venue. In my own case I live outside the village and the round trip is rather more than a mile from the village hall and you will be best to come in your car.
On previous occasions most of the visitors have not deigned to come to me at all - they have been too exhausted viewing the beautiful village gardens.
If it is a nice day there will be several hundred visitors. We hope so. My friend Peter Williams at Weathervane House will be hoping for better weather than the cold windy day when he was open recently under the ‘Yellow Book Scheme’.

It is all very relaxed. I remember when we  first came to the village and the Open Gardens were then a very low key event. It was a miserable wet day and Brenda and I sat on a bench by a garden pond in a short interlude of sunshine. The residents looked out to see two lone decrepit old age pensioners sitting on their lawn and came out concerned that we had strayed!
On another occasion we had double booked our own calendar and were away. Folks walked round unattended.

You need to get in your car to come the half mile out of the village. Not in the Open Garden scheme    this year so the only chance to see it. A ¾ acre plantsman’s garden which includes twin ponds, gravel  borders, cactus and succulent plants, herbaceous borders, boggy planting, a rock garden and fruit and vegetables. I hold the National Dicentra collection and blog about my garden as Roger Brook nodiggardener.

Weathervane House
This is a two-acre woodland garden with magnolias, rhododendrons, azaleas, flowering trees and shrubs together with mixed herbaceous borders, lawns and a circular meadow.  The woodland areas are at their best in April and May and the herbaceous border looks attractive from early June. There is also a fruit garden, a glasshouse and a large polytunnel with specimen rhododendrons and many other plants propagated on site. Plants are for sale.
Parish Plot

The parish plot is owned by the Parish Council for the use of villagers and it has gradually been reclaimed from wild since 2005. Overgrown with ground elder it was treated with glyphosate several times and garden plants introduced over the previous six years. Once charitable homes for old age village residents the old fruit trees remain but only foundations of the house. It is now a wild garden.

At the front of the house, behind the large shrubbery is a pretty cottage garden with a small lawn surrounded by borders of lupins, delphiniums, geraniums, peonies, asters and an array of other cottage garden plants bringing seasonal colour all through the year. At the far side of the drive, between the pampas and conifers, is an autumn bed with echinaceas, rudbeckia, crocosmia and heleniums for late summer colour. Behind this bed is a small wooded area. The rear of the house has a wonderful open vista with views across to the Wolds. There is a newly planted patio area with a walled section for fruit bushes. The pond is full of newts and weed…. a project for another day!

Ashlands
This garden has been planned with low maintenance in mind. There are shrubs such as rhododendrons and roses under planted with spring and summer bulbs and some herbaceous foliage plants like hostas and ferns. Part of the garden is shaded by the trees in the churchyard so by trial and error we have found what grows in the ‘Twilight Zone’. There are paths behind the beds so we may take a walk around and among the garden rather than just look out on to it.

This small garden is made up of several smaller areas including a wildlife garden, a sunken rockery and herbaceous borders – generally a quirky cottage garden. It is hard to describe – it is just ‘mine!’

A wildlife friendly garden created in the last ten years. It has winding gravel paths surrounding beds planted with trees, shrubs and masses of flowers. There is also a small lawn, a newly planted woodland/shady area and an insect hotel. Fruit is grown amongst the flowers and we have a small selection of vegetables growing in large pots.

Manor House Farm is set in three acres of land. At the front of the property is a natural pond, two copses and the wild wood! Most of the trees were planted in 1992. The faster growing trees such a cherry and silver birch give cover for the slower growing english oak and ash. The field between the public footpath and the house is mainly left as long grass as it makes a good hunting ground for barn owls which can be seen most evenings at this time of year as they look for food for their young. Inside the beech hedge (again planted in 1992) you will find the rose and lavender garden (planted in 2012) and from there you can walk through to the flower garden (planted 2012, 2013 and 2014 and still under development!). The flower garden has an ornamental pond and photographs to show how the garden has changed over the years will be on display in the summerhouse